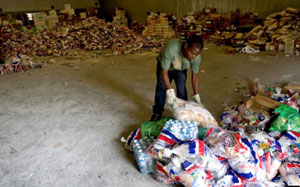 Humanitarian workers from the Dominican Republic prepare to distribute food  after the earthquake in Haiti, January 19, 2010. (UN Photo/Marco Dormino)

A heated debate over whether humanitarian aid should also include building  longer-term resilience in communities was triggered in the blogosphere in February by Jonathan Whittall, Mit Philips, and Michiel Hofman from Médecins Sans Frontières (MSF). They argued that the resilience concept, as a bridge between humanitarian response and development aid, distracts humanitarian actors from short-term life-saving activities by focusing on supporting local and national systems to better face and recover from shocks over the longer term.

Paul Harvey from Humanitarian Outcomes then rebuffed the argument, stating that, by being de facto involved in decades-long protracted emergencies, humanitarian actors have the responsibility to plan long term by building resilient systems and therefore avoid recurrent relapses into crises. This elicited reactions from Simon Levine from the Overseas Development Institute and Alyoscia D’Onofrio of the International Rescue Committee, as well as further arguments and counter-arguments by Paul Harvey and Jonathan Whittall.

Beyond the rhetoric, what is really at stake in this debate from MSF’s perspective is a worrying “decrease in the emergency capacity of so-called humanitarian organizations” in conflicts such as the Central African Republic or the Democratic Republic of the Congo—especially in areas under the control of nonstate armed groups— and that they correlate with the growing focus on resilience building. As Levine emphasized, “development is about choices a society makes on how to create and share out resources—so it’s always inherently political.” This makes development a “deliberate contradiction”—in MSF’s words—to humanitarian aid that should stay at arm’s length from political controversies (thus preserving neutrality) in order to deliver aid wherever it is needed (in keeping with impartiality), including in al-Shabaab or Taliban areas. With its focus on building systems, the argument goes, the resilience concept facilitates the co-opting of humanitarian aid by political stakeholders—including Western donors’ statebuilding and stabilization agendas.

This argument is strongly opposed by Harvey and D’Onofrio who posit that 1) “given the need to think long term, humanitarian action does need to engage with states, governments and governance” (Harvey), and 2) “the focus of development aid has increasingly become about supporting the provision of services and increasing access to those services, whether they are provided by the state, private businesses, churches or other local organizations” (D’Onofrio). And yes, continues Harvey, this does require humanitarian actors to talk with the Taliban and al-Shabaab about their responsibility to deliver health care services, however difficult this might be in the context of Western donors’ counterterrorism policies.

Beyond resilience, this debate has great relevance in current discussions on risk management and emergency preparedness— which might well become the new dominant paradigms in the humanitarian aid world—and are the subject of two recent studies by the UN Office for the Coordination of Humanitarian Affairs and the Overseas Development Institute. Indeed, in line with the notion of resilience, these two concepts place the primary responsibility on states to prevent, prepare, and respond to crises and the importance of strengthening existing local and national systems.

In this context, the danger is not so much that humanitarian actors engage in resilience building—by itself a laudable goal—but that this resilience agenda becomes a new context-blind diktat, a cover-up for a donor-imposed, one-size-fits-all approach that fails to take into account the specificities of the different contexts in which aid actors operate. Such a new diktat would reduce the comparative advantages of different humanitarian actors—especially the respective advantages of purely emergency aid organizations and multi-mandate organizations—and ultimately bulldoze the diversity of the humanitarian sector, which is its strength.

Recurrent in this debate is the fact that resilience building is a problem, particularly in situations of conflict. It is therefore surprising that nobody has really tried to expressly articulate the fundamental difference between humanitarian action in conflict and in disaster. The danger is that when discussing the centrality that resilience should or should not have for humanitarian actors, one completely ignores this fundamental difference of contexts.

In that respect, it might be useful to look back at the fundamentals of humanitarian action in situations of conflict, where the very concept of impartiality comes from: international humanitarian law, and in particular, the 1949 Geneva Conventions. Underlying the concept of impartiality is the argument that humanitarian actors should not interfere with the conflict (neutrality). For instance, the Fourth 1949 Geneva Convention states that a party to a conflict shall allow free passage of certain goods intended for the civilians of another party through its territory, if it has no reason to fear that “a definite advantage may accrue to the military efforts or the economy of the enemy.” Not only does this provision embody the principle of political neutrality—that is, not siding with any of the belligerents—it also suggests that humanitarian aid should not even support the local economy.

Consequently, a developmental approach in humanitarian aid “might contravene the definition of humanitarian assistance in international law,” as noted by one legal expert. Beyond purely legalistic reasoning, the condition of limited interference of humanitarian actors was arguably the very reason why states conceded this obligation to accept and facilitate humanitarian access. In this sense, Whittal’s point that resilience is inherently incompatible with humanitarian aid finds credence in international law in situations of conflict, since “building the resilience of systems is also building the legitimacy of the groups that control the system,” something unacceptable to the state signatories of the Geneva Conventions.

Resilience in itself is therefore not a problem. What poses a problem is the centrality it takes as an institutional and operational objective in light of the context, whether in a situation of conflict or following a natural disaster. Resilience building as a primary objective of an organization in conflict will indeed impact an organization’s capacity to access populations in need wherever they are and address their immediate needs. However, resilience building as a secondary objective may certainly be incorporated in an organization’s programming, as long as it does not jeopardize its primary objective of saving lives.

In this respect, D’Onofrio has a point when he said that “local state structures may not be aligned with national ones, a health service may have very little political or material connection to military service,” and supporting them might not necessarily impact the perception of neutrality of humanitarian actors. For instance, the health ministry in Sri Lanka—primarily a technical ministry—was still supporting and paying salaries of health staff present in LTTE-controlled areas at the height of the conflict in 2008-2009. This relative political neutrality justifies some degree of support to the ministry to make it a more resilient system that could benefit all sides, without necessarily jeopardizing emergency relief.

Conversely, resilience building as a primary institutional and operational objective in peacetime natural disasters—and even more so with a well-meaning government—does not necessarily raise the same thorny issues.

Therefore, as the resilience and risk management agendas are set to gain further traction in the lead-up to the 2016 World Humanitarian Summit, it would be wise to avoid applying the same recipe to drastically different circumstances, and pay due attention to the fundamental implications of humanitarian aid in conflict.

Individual humanitarian agencies would also do well to remain transparent with others and honest with themselves regarding what their primary objectives are, and recognize the limitations that these institutional and operational choices entail. If their primary objective in a conflict is to build resilient systems and communities, they will certainly see their capacity to address immediate needs wherever they are reduced. Maybe then, as suggested by Whittall, they should do so “not under the banner of humanitarianism.”

Jérémie Labbé is a Research Fellow at the International Peace Institute. He tweets at @jeremie_labbe.