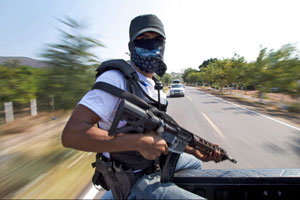 A member of a self-defense group in Michoacán, Mexico, December 19, 2013. (Ignacio Juarez/Esther Vargas/Flickr)

Self-defense groups have proliferated across Mexico in recent years, especially in Michoacán, where the absence of adequate state security has allowed the Knights Templar cartel to brutalize its citizens since 2011. Last week, I spoke with Steven Dudley, Senior Fellow at American University’s Center for Latin American and Latino Studies, Washington D.C., about the legality of these vigilante groups and their growing impact on the communities they work in. Cartel violence is a main focus of Mr. Dudley’s organization, InSight Crime, which tracks organized crime in Latin America and the Caribbean.

Over the past year, in the Mexican state of Michoacán, vigilante or self-defense groups hav­­e increased against local cartels. Can you give us an overview of why these groups came about in Mexico, and how effectively they’ve curtailed violence?

With regards to the vigilantes—or self-defense groups, as they like to be called—there are a number of different types that have emerged. Probably some of the oldest ones are based in indigenous communities that have a constitutional right to create self-defense groups. These are groups that are based mostly in places such as Guerrero, which is a neighboring state of Michoacán, but in other places of the country as well.

Other groups have formed that are much more along the lines of vigilante groups in the sense that they are perhaps lower on the socioeconomic scale but have been victimized steadily over the last few years, and have suffered largely because there is very little state presence—and then, when there is state presence, that state presence is often compromised by illicit interests or illegal groups.

Then there’s a fourth group, a group that is more aligned with other rival criminal interests. So, they’re groups that are seeking to take advantage of the situation and occupy the space that a group like the Knights Templar currently occupies.

On January 27, federal authorities signed a deal with some vigilante groups to legalize the so-called Rural Defense Units in Michoacán. In that agreement, did they propose measures to prevent impunity for any crimes committed by the groups?

Let’s be perfectly clear here. I don’t think what they did was legalize anything. I think that what they did on January 27th was essentially provide a very basic legal framework that, if it were challenged in a court, would have no legal standing. It’s not a law. It’s not anything that went through Congress. It wasn’t debated by anyone, aside from the president’s office. It’s an attempt to bind them to certain types of obligations or requirements, but these are very, very loose at this stage. There’s no mention of a mandate; there’s no mention of a jurisdiction. There’re no clear rules as to what types of weapons they can have under their purview or how they legalize weapons that are already under their purview.

So, this is very bare-bones and, more than anything else, a band-aid—an attempt to politically placate would-be critics like myself and others, who would say that, at this point, you need a legal mandate, you need some sort of idea as to what exactly is their role, because they’ve exploded.

They’re out of control in the sense that there’re so many, and we don’t know who they are or what they represent, etc. And you can’t have that. As a functioning state, you can’t have armed men outside of your jurisdiction that are pretending to uphold the law. What law? Whose law? They’re not elected officials. They’re not vetted soldiers—or policemen, for that matter. There’s no legal purview. There’s no way to determine what exactly their role is and when they’re supposed to enter into situations, and when they’re supposed to stay out of them.

So, it’s very flimsy at this point, and there’s no way really to know what exactly the Mexican government imagines when they imagine some sort of self-defense or legal self-defense groups, because that framework that they offered is very thin at best.

Has the number of these groups increased since they were legitimized by the state?

It’s very hard to tell whether the number has changed. It appears to be going up in the sense that there are more and more organizations that are appearing across the country. There is no unified central movement. There’s no one keeping tabs, per say. It’s anyone’s guess as to how many groups there are, and it probably changes from day to day, or at least week to week.

Qualifying a group, as a self-defense group or a vigilante group, at this stage is a very dangerous game. Because really, if you think about it, all security or state security operations always depend on, to a certain extent, community involvement. Just take something as simple as the “see something, say something” campaign that they had here following the 911 attacks. That’s something that would technically fall under the idea of being vigilante; but of course much, much less so, because you’re not talking about people rising up in arms.

But essentially, the idea is the same—the idea that there’s community involvement or local involvement somehow in policing or maintaining security in an area. And this is what we’re seeing in Mexico. It’s almost the opposite in the sense that they don’t have state security forces operationally functioning and the vigilante groups or self-defense groups emerge in their stead. And, as I said, they have varying interests.

In Colombia, Peru, and Guatemala, there are histories of paramilitary groups being involved in the drug trade and extortion, and also responsible for massive human rights abuses. Do you think that these kinds of comparisons are relevant for the Mexican case?

I think they’re relevant. These cases are all cases that the Mexican government and the Mexican population have to keep in mind as they go forward. They don’t offer exactly models to follow or to not follow, though, because each one of these cases is slightly different. It has slightly different origins; the enemy is slightly different. The actual groups themselves are operating under different aegis in different legal frameworks. And so, examples from other countries don’t exactly offer a prescription of what to do. More than anything else, they offer a series of warning signs about how Mexico can perhaps avoid problems.

If they’re going to go down this path, they have to think through very carefully all these questions about mandates, types of weapons and jurisdiction, vetting processes, command-and-control issues. All of these things have to be considered. They also have to consider the flipside of what could happen. I think that the strongest case offered in that mix is the Peruvian case, in which loads of their self-defense groups were slaughtered by a very organized insurgency at the time.

And obviously, you have the other end of the spectrum, which are the cases of Guatemala and Columbia—where you had in the Colombia case high-level state collision with what were essentially illegal paramilitary groups and paramilitary groups that ended up being the strongest drug trafficking interests in the whole region. So, what they purported to fight against, they ended up being a part of.

And then of course the case of Guatemala, which is the absolute extreme of a state taking full advantage of this mechanism in order to do its dirty work for it. So, all of these cases offer warning signs.

Do you think it’s at all realistic that the Mexican government could partner with these self-defense groups to curb cartel violence—without them turning into paramilitary death squads, as groups in the previous examples have been called—and then move on to disarm and demobilize them?

My gut tells me—and what the experience tells us from looking around the region—is that it’s very difficult to do this in a way that is orderly and doesn’t contribute to the violence rather than lessen violence and victimizing of civilians.

While the Peruvian case does offer some positive results, if you take it in the sum, in looking around the region, you look at the sum of all the different pieces, I think the equation comes out to be negative, especially given what we know about the Mexican government at this stage. After a prolonged period of fighting, we know that it’s weak. We know that it hasn’t been able to create the type of situation in which even the forces that are under even their own purview are under their control.

Under what circumstances would we believe that they would be able to take a civilian force and keep it under a clear mandate that ends up protecting civilians without getting involved in criminal activities? And not being involved in arbitrary abuses against civilians? There’s just very little confidence that can be drawn from the current Mexican state that would give us an indication that that’s the direction that this would go in.