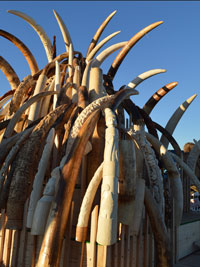 Tied to rising ivory prices, elephant poaching and ivory trafficking has tripled over the last fifteen years, with the rate of increase jumping dramatically from 2009. Profits from illegal wildlife trafficking are now worth an estimated $8-10 billion USD annually, making this the fifth most profitable form of transnational organized crime after drugs, people, oil, and counterfeiting. The sale of endangered species—from tigers to rhino horns to turtles—is big money, and elephant tusks are by far one of the most lucrative subsectors of this illicit trade.

There have been increased national anti-poaching efforts—in South Africa and Kenya, for example—but the poachers’ methods are evolving and becoming more brutal and distasteful to the general public. They now include cyanide poisoning of watering holes to reduce the risk of being detected by gunfire, resulting in the indiscriminate killing of entire herds.

For years, most states along the supply chain have doled out minor punishments for wildlife crimes, leaving poachers, traffickers, and brokers free to extort maximum profits with little risk. With trafficking comes violence against both animals and people which threatens rule of law and increases instability in central African states (where the vast majority of ivory comes from) and along the chain to the major markets in Asia, especially China, which has by far the biggest consumer demand in the world. UN Secretary-General Ban Ki Moon warned the Security Council to heed this growing security concern last summer.

This issue was brought center stage last October when a series of op-eds appeared in mainstream newspapers shortly after the Westgate Mall attack in Kenya saying that al-Shabaab is significantly funded by trade in ivory. Though the numbers are hard to verify, the question of a link between terrorism and poaching has caught people’s attention, including Hillary Clinton, who has focused on the issue since leaving political office. “There is growing evidence that the terrorist groups stalking Africa, including al-Shabaab, fund their terrorist activities to a great extent from ivory trafficking,” she said at a meeting of the Clinton Global Initiative in New York in September.

In addition, another report found that the Lord’s Resistance Army (LRA) contributed to the recent upsurge in elephant poaching in northeastern Congo. The LRA killed fewer elephants than other actors such as traditional poachers who use it as a subsistence income, and armed groups and ex-soldiers from Uganda and South Sudan, but the report found that the militarization and lawlessness associated with LRA presence led to a surge of professional poachers and others with connections to global smuggling networks.

Reflecting a growing awareness of this issue, the US State Department launched the Transnational Organized Crime Rewards Program last November, akin to an older initiative called the Narcotics Rewards Program. The first bounty is $1 million USD for information leading to the breakup of the Xaysavang Network, a wildlife trafficking group based out of Laos. With affiliates in South Africa, Mozambique, Thailand, Malaysia, Vietnam, and China, the Xaysavang Network distributes ivory and rhino horn—as well as other endangered species in part or whole—throughout Asia and beyond. Law enforcement has dubbed Vixay Keosavang, the Laotian businessman who runs the network, the “Pablo Escobar of wildlife trafficking.”

Of course, men like Keosavang wouldn’t be in this business without a viable market. And other initiatives have tried to take a more comprehensive approach to address both supply and demand, as well as the elements in between. The Clinton Global Initiative’s new $80 million USD program called the Partnership to Save the Elephants aims to integrate NGOs, governments and regional organizations to achieve its three-tiered goal: stop the killing, stop the trafficking, stop the demand. Similarly, the African Elephant Summit in Botswana last month brought together government actors from origin, transit and destination states—players from all along the ivory value chain. The parties proposed a range of urgent measures, including the need for collaboration of law enforcement between states, public awareness campaigns, and increased penalties and enforcement for wildlife crimes.

Such new, comprehensive anti-trafficking packages are a welcome acknowledgement of the multifaceted nature of the challenge policymakers face as elephant populations plummet. But even if these measures are successfully adopted and adequately implemented by all parties, it may not be enough to curb poachers if the trade remains highly profitable.

This is where the international regulatory framework for wildlife trade, known as CITES, could come in. The recent growth of poaching aligns with a 2008 loophole applied to an older CITES trading agreement. In 1989, CITES all but banned ivory sales, drastically curbing poaching in Africa. After nearly two decades of success, however, CITES officials approved a one-off sale of over 100 tons of pre-1989 stockpiled ivory to China and Japan in July 2008. Since this time, there has been a 70 percent increase in the Chinese black market of ivory and a dramatic surge in elephant poaching in Africa.

It is difficult to discern the pre-1989 legal ivory from fresh tusks smuggled into a country, so this ambiguity can create a de facto viable market for conflict ivory with negligible risks to distributors. CITES reports indicate that China’s control systems have “faltered considerably since the country was a CITES-approved participant in the one-off ivory sale held in four southern African countries in late 2008.” Although a causal relationship between the one-off sale and the global rise in ivory trafficking warrants further investigation, the timing aligns.

This loophole may also be driving up prices. This government-sanctioned departure from the ivory trade ban validates the demand for ivory to a ballooning middle class in China. And as trade in limited legal stockpiles drives up demand, illicit merchants are empowered to increase their prices, which in turn inspires poaching and the entire cycle that follows.

Complete moratoria on all domestic and international trade, processing, and trafficking of ivory could therefore be the most surefire way to curb the slaughter of African elephants—there were some 35,000 killed in 2012 and preliminary data from 2013 show no signs of slowing—and related security concerns. But without the cooperation of China and other consumer states, the ivory trade won’t end any time soon. It may be that regional organizations such as the African Union or ASEAN could help build traction here. At the same time, tackling the demand for these products could make a ban more acceptable to consumer countries’ domestic constituencies. It would also make this a much less lucrative business on the supply side, leaving armed actors out in the cold.

John Eller is a Research Assistant at the International Peace Institute.

About the photo: Confiscated elephant ivory waiting to be destroyed during a large-scale ivory “crushing” event in the United States. (Ivy Allen/USFWS)