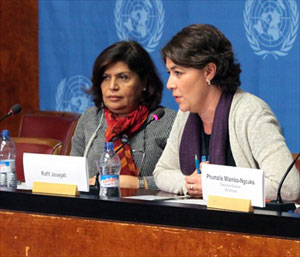 Syrians outside the Syrian peace process discuss the need for the participation of women and civil society in the talks, Geneva, Switzerland, January 17, 2014. (UN Women)

Despite the data demonstrating that peace deals that include civil society groups are 64 percent less likely to fail, the Geneva II peace talks appear to be falling into the trap of exclusion. The vast middle ground in Syria, including human rights groups, religious groups, and the mosaic of unarmed actors that are already working for peace, is not represented in the Geneva process that got underway this week. And international actors’ efforts to get Syrian women a seat at the table have so far failed.

A gathering of women from Syrian civil society groups issued a call for participation in the talks at a conference convened by UN Women and the Netherlands in Geneva last week. This call was taken up by EU foreign secretary Catherine Ashton and British foreign minister William Hague, among others, in their official speeches at the opening of the talks in Montreux on Wednesday. Hague appealed for a “formal role” for Syrian women’s groups and civil society at the meeting. “There can be no lasting settlement in Syria that does not involve Syria’s women at every stage of the process,” he said.

Hague’s was one of 40 or so speeches made by foreign ministers as part of the process. The talks’ organizers are rightly concerned about including a diverse spectrum of international actors to give the process international legitimacy. As the heated dispute over Iran’s participation demonstrated, they also consider the presence of key regional actors to be vital for securing regional buy-in for any outcome in what has clearly become a proxy war.

When it comes to buy-in within Syria, however, only two Syrian sides are thus far represented at the talks. And both suffer from tenuous legitimacy at home. The Western-backed Syrian National Coalition representing the opposition is present on the basis of shaky links with rebel groups on the ground in Syria. At the other side of the table, the Syrian regime faces new evidence of gruesome torture and killings on an “industrial” scale, released by a team of international prosecutors just before the talks began.

Mediators often remain reluctant to include unarmed nonstate actors in peace talks because they feel it will be inefficient and unwieldy, and they consider it difficult to evaluate who should be represented and how. While focused on managing the variety of international statesmen and winning short-term gains like ceasefires between armed groups, it can be easy for peacemakers to overlook the risks borne by failing to include civil society groups. First, if the public does not perceive the process to be legitimate and fair, and if people have no sense of ownership or representation, the outcome is unlikely to be sustainable. Second, elite bargains over short-term issues like humanitarian access and long-term issues like power-sharing can reinforce the very exclusion and marginalization that contributed to starting the conflict.

Only one third of the 83 peace agreements signed in the post-Cold War period included a civil society actor. Indeed, in the traditional context of interstate wars, it was considered sufficient to bring elite political and military actors that represented the state to the table. However, peacemakers have struggled to adapt to the sharp decline of interstate wars since the Cold War ended and the rise of new kinds of violence and conflict. Today’s intrastate wars with nonstate actors are accompanied by a broader trend that is calling into question the legitimacy of states around the world, as they fail to respond to their citizens’ needs and face riots and protests as a result.

While research shows that civil society groups are needed to garner support for the outcome of a peace process among the broader population, they can also make concrete contributions to short-term ends during the process. In negotiations over local ceasefires or humanitarian access, for example, civil society groups can bring insights from the ground on the impact for civilians. They can also raise key issues and approaches that may otherwise be overlooked. For example, the delegation of Syrian women who are still calling for access to the talks in Geneva have suggested mutually reinforcing negotiation tracks for implementing ceasefires, at local as well as national and international levels.

There is still time to include other actors in the Syrian peace talks, which are likely to be a long and drawn out process. Early inclusion could also help to ensure it doesn’t unravel in its first few days as the two entrenched sides dig in their heels. There are many different and creative ways to do it: In South Africa, members of the business and religious communities were among the signatories and crucial implementers of the National Peace Accord that ended 46 years of apartheid. In Liberia, Northern Ireland, Sierra Leone, Aceh, and beyond, women from civil society groups played a variety of roles, from mediating between parties and initiating ceasefires to expanding the space for negotiation.

Forty-two percent of the peace agreements signed between 1975 and 2011 failed within five years. Syrian women and civil society leaders are offering to help tilt the odds in favor of peace.