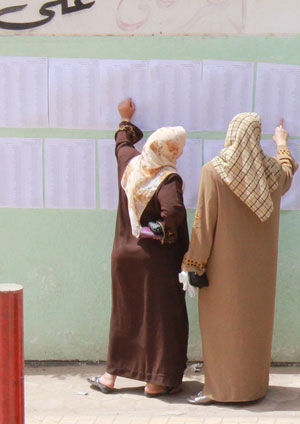 Two women search for their names at a polling station in al-Mahalla, Egypt, May 23, 2012. (credit: Nehal El-Sherif/Flickr)

Since its approval on December 1, 2013 by the 50-member commission, the revised Egyptian draft constitution has been dissected and analyzed from practically every angle. Some were extolling its new virtues and congratulating its victors, while others were pointing to its losers and lamenting its failings. The consolidation of the military’s role in politics at the expense of the rule of law and civilian oversight has attracted the most attention, and been the subject of much controversy.

For the female half of the Egyptian population, the new constitution, despite its shortcomings, gives cause for sober celebration, in terms of guaranteeing women’s fundamental rights and personal freedoms.

In the retrospective and lofty language of the preamble, equal citizenship, the rule of law, and non-discrimination are cited as the foundations on which the new constitution rests. While affirming that the principles of sharia remain the main source of legislation, the introductory text states that the constitution “will be consistent with the Universal Declaration of Human Rights which Egypt participated in its drafting and ratified.” In the last sentence of the preamble, the feminine form of the word “citizens” is fronted before the masculine one when addressing the people of Egypt to whom, it is stated, the constitution is dedicated.

In the body of the text, the new charter, under several provisions, explicitly grants women individual rights that were either excised from or circumscribed in the 2012 constitution. By virtue of article 6, Egyptian women married to a foreigner can henceforth bestow their nationality to their offspring, thus consecrating one of the tenants of equal citizenship mentioned above, and for which women rights organizations have fought hard. Nationality, the article states:

…is the right of a person born to an Egyptian father or an Egyptian mother. The legal recognition of that person and the granting of official documents proving that person’s personal details are rights guaranteed and regulated by law. The law shall determine the conditions for acquiring nationality.

Article 11 goes further and requests the state to ensure the realization of women’s civic, political, economic, and social rights, and to take measures to enable them to reconcile their family duties with the requirements of work. The commitment of the state to protect women from all forms of violence is another noteworthy paradigm shift.  In the 2012 constitution, relations between men and women were subject to sharia law. The new article reads:

The state shall guarantee the achievement of equality between women and men in all their civil and political rights and their economic, social and cultural rights, in accordance with the provisions of the constitution. The state shall take measures that ensure women are properly represented in representative assemblies, as prescribed by law, and shall guarantee women the right to hold public office and the highest administrative roles in the country, as well as their appointment to judicial bodies and authorities, without discrimination. The state shall also be committed to protecting women against all forms of violence and shall guarantee women are empowered to reconcile their family responsibilities with their work commitments. The state shall also be committed to providing care and protection for motherhood, childhood, women who are the main or sole earners in a family, elderly women and women most in need.

While welcoming that the above article does not refer to sharia’s law and morality as the main source for regulating the relations between men and women, some human rights and legal experts have taken issue with the underlying discriminatory nature of some of its language. By stressing that the state would enable women to reconcile between the requirements of work and family duties, the article implies that, in addition to pursuing a professional career, taking care of children and other domestic responsibility is the sole burden of women, not a responsibility they share with men. (Read more comments on the draft constitution here).

Women’s rights organizations have also expressed disappointment that their quest for explicit quotas for women to be observed in the composition of the legislature went unheeded.

Another important step was taken in article 93, which affirms the state’s commitment to international conventions and charters on human rights. Making these international agreements a legal basis for the state is seen as remarkable progress. The article reads: “The state shall be committed to the international conventions, covenants and charters on human rights ratified by Egypt which shall become law after publication, in accordance with the promulgation process.”

While this constitutional draft offers undeniable improvements in enhancing women’s and other citizen’s individual rights and personal freedoms, there are not enough guarantees to protect these rights from the excesses of future governments, as Egypt’s recent turbulent history attests. If the Egyptian people approve in January 2014 the new constitution, which grants the military extensive powers, they will have erred for the foreseeable future on the side of security. Egyptian women and men will have to remain vigilant to ensure that these hard won freedoms are not sacrificed on the altar of stability, and that they are treated as dignified citizens rather than subjects of the state.

Youssef Mahmoud is a Senior Adviser at the International Peace Institute.