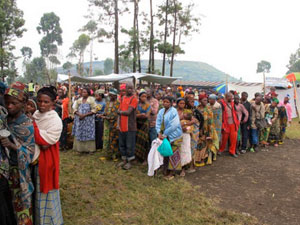 Humanitarian organizations can sometimes play a critical role in keeping people alive when populations are subjected to genocide and mass atrocities. For example, in Darfur, Sudan, international humanitarians and their local partners protected around two million civilians displaced by mass atrocities committed by Sudanese government forces and their allies, the now notorious Janjaweed militia, in 2003-4. So effective was the humanitarian response to the crisis in Darfur that by 2005, the region’s overall mortality rate had fallen to pre-war levels.1

When the storm of mass atrocities breaks, humanitarian agencies are often the only international presence on the ground. This was certainly true of Darfur, of Sri Lanka five years later, and of Syria as I write. But the relationship between humanitarian action, atrocity prevention, and the Responsibility to Protect (RtoP) has been fraught with difficulty. This piece briefly explores why and what can be done about it.

Humanitarians help reduce the vulnerability of populations to mass atrocity crimes in many different ways. Most obviously, by targeting aid at especially vulnerable groups or—more controversially—at groups that might cause harm to others as part of their strategy for coping with the terrible situations they find themselves in. Other strategies focus on reducing exposure to threat, providing paid work to reduce the need to adopt risky coping strategies (as well as reducing competition for resources), reducing incentives for joining armed groups, and designing camps to maximize safety and minimize risk.

Physical displacement is in itself a significant protection risk because it increases all manner of threats to individuals. To prevent displacement, some agencies have provided secure access to land. These strategies also help communities to sustain themselves and reduce dependency on displacement camps.

There are some circumstances, though, where flight offers the only hope of survival. Because it is so difficult and dangerous, making the right decisions about when to flee (and when not to), where to go, and by what route can be the difference between life and death. Recognizing all this, some humanitarian organizations developed programs to help local communities make better-informed decisions about their own protection by providing accurate information about the presence of threats and the location of assistance and safe routes.

Yet despite the obvious contributions that humanitarian assistance can make to the achievement of RtoP’s goal of protecting populations from mass atrocity crimes, most humanitarian organizations have been reluctant to endorse the principle. Even those that have, such as Oxfam, have thus far proven reticent to incorporate RtoP directly into their operational work. Why?

Third, emphasizing the protective work done by humanitarians can create false assumptions about their capacity to protect civilians from genocide and mass atrocities. This could encourage political leaders to employ humanitarian action as a substitute for effective political action in response to protection crises.

Fourth, in the UN context, there are concerns that associating RtoP with humanitarian action and combining the two in so-called ‘integrated missions’ could result in the prioritization of politics over humanitarianism and diminish the independent humanitarian voice.

What is to be done? These concerns cannot be simply wished away but neither can the role played by humanitarian action in fulfilling the protection goals of RtoP. The division of RtoP and humanitarian action has not always delivered good policy, as the Sri Lanka case (2008-9) shows.

The UN Secretary-General offered a useful way of thinking about the issue in his 2012 report on RtoP:

In this spirit, further dialogue on the relationship between humanitarian action and RtoP’s goals might consider three basic principles.

First, that whatever is done in the field should be done in a manner consistent with existing principles and operating procedures. Humanitarian action is sometimes able assist in protecting people from genocide and mass atrocities because of the principles that underpin it. It would be counterproductive to propose that RtoP should seek to amend or supplant these principles.

Second, recognition that humanitarian agencies already contribute to the achievement of RtoP’s goals. The key is not to establish new programs or layers of bureaucracy but to better understand and augment work that is already being done.

Third, in the UN context, the Secretary-General has always been clear in arguing that it is for individual organizations to decide how best to incorporate RtoP goals into their work. This is a maxim with wider appeal. What is needed is not a one-size-fits all solution but a two-way dialogue to better understand how protection is achieved and to better ensure that it can be.

About the photo: Congolese displaced by conflict in the North Kivu province of the Democratic Republic of the Congo. © Solidarites, 2012