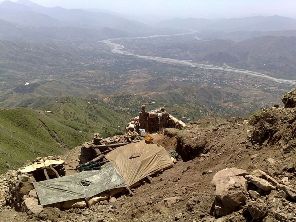 Tension re-surfaced in US-Pakistan relations last week following the November 1 US drone strike in which the Tehrik-e-Taliban Pakistan (TTP) chief Hakimullah Mehsud was killed along with other senior leaders. Both the US and Pakistani governments had put a bounty on Mehsud’s head, yet his killing caused uproar in Pakistan. The Federal Information Minister declared Mehsud’s killing as “the death of all peace efforts,” while Prime Minister Nawaz Sharif said peace could not be brought “by unleashing senseless force against our people.”

The Pakistani government’s reaction was not surprising. It had publicly announced plans to talk with the Pakistani Taliban, and, even though the TTP said it had not been contacted, the government alleges it planned to invite them for dialogue the following day. And so the official narrative became that the US wanted to sabotage all chances of creating peace in Pakistan. Several Pakistanis interviewed by the BBC and Dawn echoed this view, adding that Pakistan would now suffer revenge attacks as a consequence.

Even if the US is playing a part, there are certainly other factors that are enormous barriers to peace. With the election of Mullah Fazlullah as the new TTP chief, there will likely be no dialogue with the Taliban, at least in the short-term, and this momentary pause provides a much-needed opportunity to ask tough questions and critically re-assess Pakistan’s policy.

The fundamental question facing the peace process is, which of the Taliban groups is the government trying to talk to? The Pakistani Taliban, which according to some estimates includes up to 100 militant groups, is deeply fragmented. Within the Pakistani Taliban, the TTP serves as an umbrella group for a loose alliance of at least 30 of the groups, and is the closest thing to a central organization, but even the TTP suffers from infighting. It is this group that the government sought talks with.

Nevertheless, many groups within the TTP were and remain opposed to negotiations with the government, such as Fazlullah’s supporters. Therefore, even if the government were able to strike a ceasefire deal with a majority of the TTP factions, it would still have to fight groups unwilling to negotiate. In other words, even successful talks would neither ensure peace in Pakistan nor the end of military operations in the tribal areas. On the contrary, a ceasefire deal creates the risk of heightened instability, as groups opposed to the deal may feel isolated and respond with increased attacks and militant activity.

The second and more important question is, what are the demands of the TTP? And how do they contrast with those of the Pakistani state? The TTP is aligned with al-Qaeda, and its goals include the rejection of the Pakistani state and its constitution, and alternatively, the imposition of Shariah law and the creation of an Islamic caliphate. Nevertheless, the government’s pre-conditions for talks include the Taliban recognizing and abiding by Pakistan’s constitution and laying down their arms. Thus, not only is there a wide gulf between either sides’ core demands, but they are mutually exclusive and would quickly stymie any peace process. Perhaps the incompatibility of the asks was best expressed by a TTP spokesman who said, “He (Nawaz Sharif) is talking about laying down arms and accepting the constitution. If we were willing to do that, there would be no need to have any kind of dialogue.”

The third question is, what is the Pakistani military’s position on talks with the Taliban? One of the most curious aspects of this entire episode was the silence of the armed forces, which was only broken after the Chief of Jamaat-e-Islami (JI) proclaimed Mehsud a martyr. The military swiftly condemned the comment and, in the same press statement, also indirectly referred to Mehsud as an enemy of Pakistan, underscoring its previously reported opposition to talks.

Over the last few months, the army has suffered major attacks. The latest was an ambush in September that killed a senior general, along with a colonel and another soldier. This has severely angered the armed forces, and there is internal pressure within senior ranks to continue fighting the Taliban.

With the military’s continued supremacy on national security matters, the government’s ability to enter a peace deal with militants remains limited, as the army will neither agree to the militants’ pre-conditions nor withdraw forces from the tribal areas.

So, why did the government react so aggressively to Mehsud’s killing, and why is it so committed to negotiating with the Taliban? The government claims it wants to explore the dialogue option, especially since the US wants the same in Afghanistan. This position, however, ignores that Pakistan has previously entered into several failed deals with the Taliban.

The answers instead may lie in domestic politics. Sharif’s two major pre-election promises included ending drone strikes and talking to the Taliban. So the November 1 strike was a double whammy, showing that the government could not deliver on either promise. Moreover, the push for negotiations is heavily dictated by Sharif’s need to appease his constituency—survey data shows 23% of PML-N supporters view the Taliban positively—and his personal desire to tread carefully and avoid confrontations at a time of economic and governance crises.

The wing of the TTP that opposed talks with the government has now come to dominate the organization, and has clearly re-enlisted many that previously supported dialogue. But, even if this was not the case, it was highly improbable that dialogue would result in peace at this time. The demands of the Pakistani Taliban are incompatible with those of the government. Furthermore, the military, which still dominates security decisions, remains opposed to negotiations. Moreover, even if a ceasefire were reached with some factions, Pakistan would still have to continue fighting groups that remain opposed to talks.

A peace process will ultimately be needed to end Pakistan’s decade long insurgency. The current approach, however, is ill timed and based on flawed policies and political expediency, a dangerous combination. When it comes to dealing with the Taliban, there are no easy answers, and Pakistan’s leaders should take this opportunity to ask tough questions and adopt an approach that is both viable and offers sustainable peace.

Shehzad H. Qazi is a Research Associate at the Institute for Social Policy and Understanding.