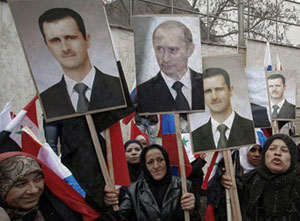 Although the June 2012 Geneva I conference was sponsored by both Russia and the United States, the run-up to the Geneva II conference now planned for mid-December has seen Russia emerging as the sole credible go-between, and this does not bode well for the future.

The fact that hopes of a diplomatic breakthrough in Syria rely almost exclusively on Russian influence results from the lack of alternative sources of pressure on Bashar al-Assad. At the domestic level, the military balance has recently evolved in favor of loyalist forces. Even though talks of a forthcoming regime victory are far too premature, these developments have made the authorities of Damascus less eager than ever to compromise with the opposition. At best, Assad hopes that the international community may assent to his view of the peace process as a means to impose formal surrender upon a weak and divided opposition. At worst, the Syrian president has both the willingness and the means to wage a very long war. Over the last year, the receding of the prospect of a rebel victory has also marginalized soft-liners within the regime, as illustrated last July by the exclusion of vice-president Faruq al-Shara from the Regional Command of the Ba‘th Party.

Abroad, there is little, if anything, to expect from both the allies and enemies of the Syrian regime. Iran, whose expanding war effort in Syria has proven key to Assad’s survival, has aligned itself with Damascus’ rejection of the main provision of the Geneva I, that is, the establishment of a transitional government with full executives powers-that solution would ipso facto deprive the president from its prerogatives. The United States’ hands-off approach to the conflict has left them with little leverage over either contender, hence Washington’s pressures upon the oppositional Syrian National Coalition (SNC) to accept holding informal preliminary talks with the Russian government in Moscow. Being largely unable to shape the outcome of the current discussions, the Obama administration is essentially interested in the process itself, which it sees as a way to prevent direct American involvement in the Syrian war. As for Gulf states and Turkey, the only alternative to their current policy of support for the insurgency would be to curtail arms deliveries to the rebels, thereby offering loyalist forces total victory and making negotiations even more superfluous for Assad.

What should we expect from Russia with regard to the current peace talks? The answer is, probably, not much. Although the Putin administration has cultivated ambiguity concerning its approach to the conflict, its behavior and interests suggest that its role can hardly be positive. In principle, Moscow is committed to the Geneva I agreement, and therefore to the establishment of a transitional government with full prerogatives. However, Russian diplomacy has also emphasized another provision of the agreement, namely the fact that the transitional government should be formed on the basis of mutual consent. In other words, the principle of a transition should be accepted by an incumbent regime that forcefully rejects it, and over which Moscow has never shown any readiness to exert significant pressure. As International Crisis Group senior analyst Noah Bonsey recently suggested, Russia’s failure to put an end to the regime-organized food-blockade of Damascus’ suburbs is very ill omen for Geneva II.

Likewise, at the very moment Russia is luring the SNC with prospects of a change of attitude, it is reaching out to other “opponents” whose interests definitely lie in the survival of the incumbent regime. In early November, indeed, Russian Deputy Foreign Minister Mikhail Bogdanov met in Moscow with the president of Kurdistan’s Democratic Union Party (PYD) Salih Muslim, Hafiz al-Assad’s brother Rifat, and the recently dismissed Syrian deputy prime minister for economic affairs Qadri Jamil. Muslim leads the Syrian Kurdish party that maintains the closest ties to the Assad regime; Rifat al-Assad has been living in exile since the late 1990s due to his opposition to Bashar’s accession to power, but he is very unpopular in Syria given the fact that he is chiefly remembered as the linchpin of the bloody suppression of the 1979-82 uprising; Jamil is widely perceived among the opposition as a member of the regime whose oppositional credentials were fabricated through his supposedly staged dismissal following an October 2013 meeting with US ambassador Robert Ford. Overall, the SNC may have some good reason to suspect that by promoting such interlocutors, Russia is in fact trying to engineer a peace process in which the Assad regime would end up negotiating with itself.

There are many other reasons to doubt Moscow has loosened its position on Syria, such as the increase in Russian arms shipment to Assad over the last year, or Russian Minister of Foreign Affairs Sergei Lavrov’s recent speech in front of a delegation of the Syrian regime, to which he asserted that the current priority in Syria is the struggle against terror rather than Assad’s resignation. In fact, Russia has fundamentally no reason to abandon the incumbent Syrian president, because it is unlikely that its interests in the country could be preserved under another regime.

Moscow’s influence in Syria chiefly relies on hard power, that is, on its partnership with the political-military elite, rather than on cultural and economic ties. Moreover, Russia’s status as Assad’s chief armorer at a time when loyalist forces are turning much of the country into rubbles have made Moscow an enemy-state in the eyes of many Syrians.

Against this background, it is probable that any elected regime in Syria would be strongly anti-Russian. The idea that Putin’s anxieties in that respect could be alleviated through some “guarantees” provided by Western states does not make sense. Imposing such a limitation of sovereignty upon post-Assad Syria would require an ability to exert significant influence over the new regime and particularly on its armed forces.

Yet, Western countries have zero leverage over the incumbent regime’s military, and their Gulf allies are at pains to keep control of an insurgency which will not be able to topple Assad over the next several years anyway, if ever. In fact, Russian diplomats know very well that the only actor that is able to guarantee the permanence of their interests in Syria is Bashar al-Assad himself. This is why they will ensure that Geneva II reinforces, rather than undermines, the position of their protégé.

Thomas Pierret is a lecturer in Contemporary Islam at the University of Edinburgh. He is the author of Religion and State in Syria and the Sunni Ulama from Coup to Revolution (Cambridge University Press, 2013).”

About the photo: Syrians hold photos of Assad and Putin during a pro-regime protest in front of the Russian embassy in Damascus, Syria, March 4, 2012. (Freedom House/Flickr)