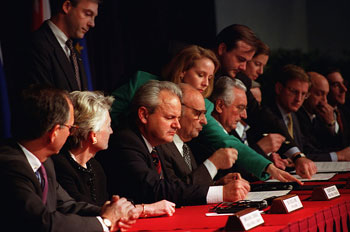 When genocide and mass atrocities strike, the first imperative is to stop the violence. When the violence stops, protection increases. With outright victory for the perpetrators of these crimes less likely than it once was and outright defeat still relatively uncommon, an increasingly significant number of episodes of genocide and mass atrocity are terminated or mitigated by agreements negotiated with some of the perpetrators. Thus, atrocities in Darfur, South Sudan, Kenya, the DRC, former Yugoslavia, and East Timor were ended or significantly reduced by negotiation. Meanwhile, one of the few international points of consensus on the current situation in Syria is the need for a negotiated political settlement involving all the relevant parties.

Sometimes, diplomatic imperatives collide head-on with protection concerns. Moral or legal considerations grounded in the Responsibility to Protect (RtoP) sometimes make it more difficult to negotiate an end to violence with political leaders responsible for atrocity crimes. This is primarily because these principles reduce the capacity of negotiators to offer incentives and compromises to those responsible for atrocity crimes.

This is not a new problem. In 2006, the UN’s chief humanitarian, Jan Egeland tried to negotiate with LRA leader Joseph Kony shortly after his indictment by the ICC. Kony demanded that the indictment be lifted as a prerequisite for peace–something Egeland could not deliver. The talks collapsed and the violence continued. More recently, the ICC’s indictment of Sudan’s President Omar al-Bashir has presented all sorts of diplomatic difficulties. On the one hand, the president is indicted for grave crimes by an international tribunal backed by the UN. On the other, Bashir remains indispensible to the achievement of peace in Darfur and the smooth running of the UN/AU hybrid peacekeeping mission there (UNAMID). So fraught has the situation become that some UN officials were advised that, should they need to pose for photographs with the Sudanese president, they ought not smile.

By raising expectations about what the world should be doing to protect populations from genocide and mass atrocities, RtoP might inadvertently limit the deals that negotiators can offer perpetrators and damage already difficult relationships with political actors whose support is often needed to end the violence.  In 2012, South Sudan expelled a UN human rights investigator, Sandra Beidas, for publishing information about serious human rights abuses by the country’s security services. Three years earlier, UNICEF’s spokesperson in Sri Lanka was expelled for raising concerns publicly about the treatment of Tamil children in government run “welfare camps.” In these and other cases, the international community’s capacity to negotiate protection was harmed when officials were expelled for publicly raising protection concerns.

Situations like this call for difficult judgments about whether protection is best served by quiet diplomacy or by speaking out. Quiet diplomacy can sometimes miss the mark by facilitating a climate of impunity, as happened in the final days of the Sri Lankan civil war in 2008-9. But megaphone diplomacy can also sometimes make matters worse by encouraging retribution and making already difficult relationships more so without direct gains on protection. Here are five pointers that might help diplomats navigate through these difficult issues in a manner consistent with the RtoP principle:

1. Prioritize protection. Whatever else may be going on, the overriding objective must be to protect populations from genocide and mass atrocities as far as it is possible to do. RtoP is not a “tool” to be employed, but a basic principle to which the community’s energies should be directed. Strategies should aim to achieve the greatest protection for the greatest number of people possible in the affected area, as quickly as possible. How that might be achieved will differ from case to case.

2. Aligning means to ends. Approaches should start by understanding the nature of the problem and the causes of civilian suffering, tailoring responses to address those issues, and ensuring that once adopted policies are properly resourced.

3. Doing it though not always saying it. Although language matters, it is much less important than practice. If the language of RtoP makes it more difficult to get protection work done, then it should be avoided–but it is equally important to ascertain whether the quiet approach is yielding tangible results.

4. Sequencing responses. While in the long-term there is no stable peace without justice, sometimes justice and protection concerns inhibit the pursuit of “negative peace”–the ending of violence. Prioritizing protection might sometimes make it necessary to set aside justice considerations, albeit temporarily.

5. Muddling through. Muddling through sometimes has a quality all of its own. Genocide and mass atrocities are too rare and complex to permit the development of robust models telling us how best to protect populations in each and every case. There are simply too many factors that impact a situation for us to make iron-cast laws about what works and what does not. Muddling through is therefore unavoidable. But if officials prioritize protection, try to align means and ends as far as possible, can be pragmatic about the language they use, and think creatively about sequencing, it may be possible to navigate a way through the dilemma.