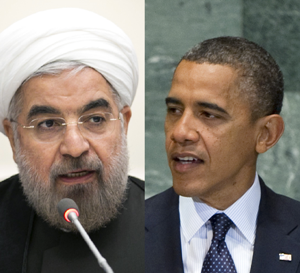 As Iran sits down for nuclear negotiations with the five permanent UN Security Council members and Germany (P5+1) in Geneva this week, shadows are creeping into the spotlight that shone on Iranian President Rouhani during the opening of the UN General Assembly last month. The measured optimism that diplomats, experts, and commentators had been expressing since Rouhani’s election reached a climax following the president’s speech at the UN, a positive meeting between Iran and the P5+1, a historic handshake between US Secretary of State Kerry and Iranian Foreign Minister Zarif, and a phone conversation between the two heads of state.

However, the celebration was far from universal, and in the coming weeks and months negotiators on both sides will face a variety of opponents at home and abroad. Indeed, the machinery to counter the so-called Iranian-American rapprochement is now in full swing, and each key group has its own reason to try to annul the marriage before it even begins.

Despite Ayatollah Khamenei’s assertion that all Iranian players must support President Rouhani’s government in an effort to show “heroic flexibility,” Iran’s Revolutionary Guard was quick to retaliate that “heroic flexibility” should not provide a green light for a “retreat from fundamental rights” and “does not include passivity or surrender.” Brigadier General Masoud Jazayeri said Iran “must have a pessimistic approach towards the United States,” warning of its “hegemonic system and arrogance.”

The hardline approach was also reflected in various media outlets. In the conservative Javan Online, one commentator expressed skepticism that “the wall of mistrust” could ever “fall with a diplomatic smile.” Even Khamenei, who to some extent is being portrayed as having Rouhani’s back, has demonstrated a wary approach and deemed some elements of Rouhani’s US visit—most likely, the phone call with President Obama—“inappropriate.” In effect, Iranian conservatives will make every effort to protect revolutionary ideology from being compromised, to preserve their own stake in politics.

Hardliners in the United States will play an equally significant role, particularly in Congress and the media. Some elements in Congress are already advocating for more sanctions against the Iranian regime at a time when sanctions have never been so crippling. The Tea Party’s power is not to be underestimated, particularly when one factors in their recent role in the government shutdown and their criticism of Obama’s less-than-stellar performance on the Middle East. In general, the prospect of celebrating an Iranian-American moment is anathema to American conservatives, and some Democratic lawmakers also appear poised to jeopardize the talks. Should Obama choose to ease sanctions, he cannot do so without Congress. Overcoming the obstacle presented by these factions will be no easy feat.

Meanwhile, conservative Cassandras in the media have started to prophesize on the implications of a rapprochement. An impassioned op-ed in the Wall Street Journal saw former US ambassador John Bolton using the Shakespearean dictum that “one may smile, and smile, and be a villain” to express his deep skepticism of Rouhani. Bolton sees Rouhani’s gesture as part of a rouse that will lead to “making on-again, off-again gestures seducing the West into protracted negotiations” aimed at buying more time to develop Tehran’s nuclear capacity. Public opinion on the issue could swing swiftly against any rapprochement as a result of this prolific media campaign.

Iran’s biggest regional foe, Israel, was quick to dismiss the Iranian gesture as nothing more than a “charm offensive.” It became clear from the get-go that the Israeli stance on Iran would be hard-edged: “a bad agreement is worse that no agreement at all,” said one Israeli official. In his address to the UN General Assembly, Israeli Prime Minister Netanyahu described the new Iranian leader as a “wolf in sheep’s clothing,” untrustworthy by virtue of his service to an “unforgiving creed….espoused and enforced by the real power in Iran” and accused him of wanting to “have his yellowcake and eat it too.”

The speech offered a window into Israel’s unease. For one, a relaxation of tensions could shift the dynamics of its special relationship with the United States, resulting in an Israeli isolation of sorts. Already, the fall-out from the Egyptian transition has heightened Israeli insecurity, particularly in light the deterioration in Egyptian-American relations, which could threaten the Camp David Accords. The idea of another massive shift that would upset the regional balance of power—not to mention the possibility that Iran could even become a regional interlocutor for the United States—is simply unfathomable for the Israeli administration.

Above all, without the fear mongering of a nuclear Iran, the Palestinian issue will come to the fore. Should a deal be made on Iran’s nuclear capacity, Israel will lose its key regional distraction and the world may have nothing else to talk about with Israel but the Palestinians.

The Gulf states are just as wary of how Iranian ascendancy might affect their own strategic alliance with the United States. Gulf monarchies are particularly anxious about the “secrecy” that surrounds this new moment and wary of the “nature of concessions,” according to the Gulf Research Center. Gulf states will “pay the price” for the US-Iranian relations, according to an editorial in the Manama daily Akhbar al-Khalij, which expressed worry that Washington may even consider encouraging Gulf allies to show a similar pragmatism when dealing with Iran.

The new dynamics with Iran may also have implications for the Syrian crisis: engaging Iran could result in better international cooperation on humanitarian coordination. This could bring Iran into the fold of finding a political solution to the conflict, thus bolstering its regional status. It would also nullify the Gulf’s effort over the last two years to create a wedge in the so-called Shia crescent by supporting the rebels against the Assad regime.

Washington has relied on the countries of the Gulf Cooperation Council (GCC) for military, economic, and geostrategic reasons for decades. If the United States—and by extension the European Union—were to relieve pressure from Iran, the Islamic republic’s geopolitical stance in the region would inevitably expand at the expense of the more regionally ambitious Gulf regimes. For one, Saudi Arabia—the epicenter of the Sunni world—would have to deal with a legitimate Shia counterpart in the region which, until now, was to some extent viewed as a rogue republic.

Focusing on the Domestic Constituency

Despite the hurdles, President Obama is persisting with his posture of openness. Perhaps, given his second term, he is thinking about his legacy; perhaps he is guided by an Eisenhower-style impulse, hoping to be credited for the “thaw” in this Cold War of our times.

While the US and Iran can afford to circumvent the dissenters abroad, they cannot ignore the threat posed by the potential spoilers at home—who are also being influenced by the former voices. In reality, the only deal that can get anywhere between the United States and Iran at this point in time is one that can weather the domestic political storms: one that both sides can sell to their respective hardliners as a national victory.

Omar El Okdah is a policy analyst in the Middle East program at the International Peace Institute.