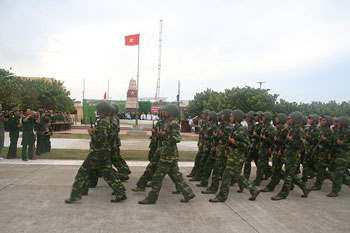 A few weeks ago, Taiwan sent a team of geologists to explore for oil and gas on the Spratly Islands, a group of islands, reefs, and islets in the South China Sea that is one of the most delicate territorial disputes in the region, not least due to the sheer number of claimants. Earlier this year, Manila made a move to take Beijing to a UN tribunal over them; Vietnam, Malaysia, and Brunei also claim them to various degrees. If the Taiwanese team–part of the state run petrochemical giant CPC Corporation–confirms the existence of large reserves of oil and natural gas, then we may expect the stakes to rise and the dispute over ownership to intensify.

China’s Geology and Mineral Resources Ministry puts the oil and natural gas reserves at an estimated 17.7 billion tons. If this is accurate, the Spratly Islands would have the fourth largest reserve bed in the world. The islands also have strategic significance, as they are located along the main shipping lane that links the Pacific and Indian Oceans. According to a study by Jorn Dosch for the Harvard International Review, this crucial sea passage is witness to 50% of all global marine traffic, and 80% of all crude oil transport headed to Japan, South Korea, and Taiwan.

The history of this dispute isn’t helping unravel the complexity of the situation. When Japan signed the 1951 San Francisco Peace Treaty, it renounced its claim to sovereignty over the Spratly and the Paracel Islands. Given the thorny nature of the issue, they were not reassigned to any other country. Today, these islands remain legally under the collective custody of the treaty’s 48 other parties, which include modern-day claimants to the islands such as the Philippines and Vietnam. China, who does not recognize the San Francisco Peace treaty, is also claiming sovereignty over the islands. All claimants— except for Brunei—occupy some part of the archipelago.

Tensions have risen recently following the claim made by the Philippines to the International Tribunal of the United Nations Law of the Sea. It was the first time for China to be taken to a UN tribunal, and they were rather unhappy about it. China blasted the Philippines for its legal recourse, and accused Manila of deviating from the agreed upon dispute settlement guidelines. China refused to participate in the case, and, as the Wall Street Journal points out, even if the tribunal does decide it has jurisdiction over the case and finds in the Philippines favor, China would very likely simply ignore the verdict.

In the meantime, China’s leader, Xi Jinping, has launched a charm offensive in Southeast Asia of unprecedented scope and tact. Unlike the budget-constrained US President Barack Obama, Xi visited Malaysia, Vietnam, Thailand, and Indonesia for the APEC summit, and then landed in Brunei where he attended a summit with ASEAN leaders. During his visit to Thailand, he signed six memoranda of understanding that cover cooperation in trade, infrastructure development, and the energy and maritime industries. In Vietnam, he signed a memorandum of understanding for a cross-border economic cooperation zone and made plans to open reciprocal trade promotion offices.

In his tours of Southeast Asia, Xi has been deliberately isolating the Philippines. It is not surprising, then, that the Philippines has been looking to strengthen alliances elsewhere. Keeping his promise to assist the Philippine Coast Guard in protecting the country’s maritime territory from “foreign intruders,” Japanese Prime Minister Shinzo Abe sent ten patrol ships to the Philippine government. These were filed as being part of the Japanese government’s official development assistance (ODA) to the country.

China’s behavior, viewed from the Philippines, can be seen as inviting concern. Beijing has made repeated references to its “indisputable sovereignty” over the whole of the South China Sea, and has been steadily expanding into a number of different hotspots, including the Scarborough Shoal, which is also contested territory. Any territorial misunderstandings, they say, should be settled through bilateral negotiation. The Philippines does not agree with that, claiming that there would be very little negotiation going on in a bilateral meeting with China.

As such, diplomatic tensions have deepened between the two countries, and are set to grow more, not less, acrimonious with time. Carl Thayer in The Diplomat points out that China has been pursuing a “wedge politics” strategy in its attempt to isolate Manila from other ASEAN states. China’s Foreign Minister Wang Yi pointedly omits the Philippines from his regional tours, and Philippine President Benigno Aquino was made openly unwelcome at the China ASEAN expo last August. Ahead of a Seoul summit between President Park Geun Hye and Aquino last week, China tried to convince the Koreans to not sell their FA-50 fighter jets to the Philippines. Ms. Park had to embarrassedly decline, and went ahead with the sale.

Hal Hill, a professor at the Australian National University, said Beijing has been using a “divide and rule” strategy. He said many Asian countries face tough choices when dealing with Beijing, since China is fast becoming the dominant economic and commercial power in the region. Traditionally, they would have been able to fall back on US military preeminence, but Obama’s absence at the latest ASEAN summit sent a chilling signal in this regard.

Betty Chemier is a graduate student in Pukyong National University doing work on the impact of the media on the Senkaku/Diaoyu Island dispute between Japan and China.

About the photo: Vietnamese troops on Spratly Island, 2009 (Ha petit/Wikipedia)