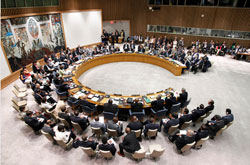 The August 21 chemical attack in Syria has put the UN Security Council back into the spotlight on this issue, after being virtually paralyzed for more than two years due to the use of the veto by Russia and China. While today’s agreement between the five veto-holding permanent members (P5) to eliminate Syria’s chemical weapons gives fresh hopes for a renewed role of the Security Council, the reasons for disagreements remain numerous.

What is, and has been, at the core of the Security Council’s “embarrassing paralysis”—in the words of UN Secretary-General Ban Ki-Moon—is the possibility to impose coercive measures on the Syrian government, including the use of force, under Chapter VII of the UN Charter. Made wary partially by the precedent of resolution 1973 on Libya, which opened the door to military intervention and, eventually, regime change, Russia and China have consistently rejected any resolution referring to Chapter VII. The latest bid to agree on a resolution giving a framework to the US-Russia agreement is no different since, in Western views at least, its viability rests on the credibility of coercive measures including, but not limited to, the use of force—a requirement French President François Hollande reiterated this week.

While the Security Council has been paralyzed for months over Syria, there has been only limited public discourse thus far on the viability of the 1950 “Uniting for Peace” resolution of the UN General Assembly. This resolution, which granted the Assembly a subsidiary responsibility for maintaining international peace and security in case of failure to do so by the Security Council, provides an interesting framework to overcome the paralysis of the United Nations in the Syrian crisis.


The deadlock at the Security Council results in the broader failure of the United Nations to meet its responsibility to maintain international peace and security and address the rapidly evolving crisis in Syria. It is precisely what the “Uniting for Peace” resolution—also known as the Dean Acheson resolution—meant to overcome. It was passed by the General Assembly in 1950 to circumvent the blockage of the Security Council in the conflict in Korea, owing to an obstructionist policy by the Union of Soviet Socialist Republics (USSR) that systematically used its veto. However, this resolution—which resulted in the General Assembly authorizing and legitimizing the use of force in Korea through a nonbinding recommendation—has largely fallen into oblivion since then.

In a recently published legal article in the Journal of Conflict and Security Law, Andrew Carswell makes a strong argument for reviving the “Uniting for Peace” resolution as a means to overcome the Security Council’s deadlock by giving the legality and international legitimacy necessary to potential coercive measures. According to Carswell, “the short life of the resolution…can be attributed to the fact that it went too far when it purported to bestow upon the Assembly a role that usurped the primacy of the Security Council.” In other words, the legality of this resolution was in question not because it granted the Assembly a subsidiary role for the maintenance of international peace and security when the Council had failed to exercise its primary responsibility in that respect, a possibility implicitly envisaged in the UN Charter. Rather, its legality was doubtful because the Assembly arrogated to itself the power to decide whether the Security Council had failed to fulfill its responsibility. This potential for undermining the veto power of the P5 is what explains that it eventually fell out of favor.

Taking a detailed look at the Charter, Carswell argues that, in order to be constitutionally valid, the Security Council itself must retain its primary role by referring a matter to the General Assembly via procedural vote in case of deadlock. Indeed, Carswell’s argument revolves around the concept of illegitimate use of the veto and abuse of rights under international law, a question that the General Assembly is not entitled to resolve on its own and is best addressed by a qualified majority of the Council itself. Such referral requires the positive votes of 9 of the 15 Security Council members, but is not subject to the veto. The Assembly, in turn, can only recommend nonbinding coercive measures, including the use of force, with a two-thirds majority.

From the perspective of international legitimacy, this procedure is indeed quite attractive. Although it is theoretically possible for 9 members of the 15-member Council to refer a matter without the consent of any of the P5, the geopolitical reality is that the imposition of coercive measures—even more so the use of collective force—cannot take place without at least one of the US, UK, France, Russia, or China backing it. Geopolitical realities would ensure that the “Uniting for Peace” procedure preserves the political centrality of the P5 while encouraging a more responsible use of the veto. In addition, the fact that coercive measures and the use of force is only available when a strong plurality of states is in favor of it—at both the Security Council and General Assembly levels—represents a strong check and balance against abuse.

The General Assembly does have a spotty history. It has at times been criticized for giving some authoritarian regimes a forum to advance politics that are not necessarily supportive of the general values and goals of the UN Charter. However, it is perhaps underestimated, and it certainly is the closest thing the world body has to an international democratic forum, despite the dictatorial nature of some of its members. A year into the Syrian civil war, the Assembly was so exasperated by the Security Council’s inability to take appropriate measures that it actually passed—with a large majority—a highly unusual resolution condemning the Council’s inaction.

Although it is questionable whether the current mood within the Assembly would give the necessary qualified majority to recommend the use of force—the relevance of which in Syria is itself debatable—the “Uniting for Peace” procedure would allow it to recommend a range of other coercive measures, including sanctions. Beyond enforcing the ban on the use of chemical weapons, this would empower the General Assembly to back up its numerous calls for a political solution to the conflict and for better humanitarian access with more tangible and enforceable measures. Although these measures would remain nonbinding, and their implementation depend on the good will of member states, it would equip them with the legality and international legitimacy that is lacking absent a strong resolution by the Security Council.

In Carswell’s words, “if states choose a new and constitutional path for the [Uniting for Peace] resolution, with strong checks and balances at both the Council and the Assembly levels, the resolution’s positive image may indeed be restored,” and also provide a way out of the Council’s deadlock. This would allow the United Nations to face up to its responsibility to maintain international peace and security and avoid, in the future, such “embarrassing paralysis” as in the Syrian conflict.

Jérémie Labbé is a Senior Policy Analyst at the International Peace Institute. He tweets at @jeremie_labbe

About the photo: A UN Security Council ministerial meeting on the humanitarian situation in Syria, August 30, 2012. UN Photo/JC McIlwaine