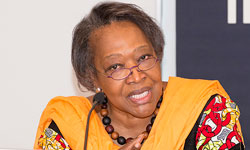 In the traditionally male-dominated environment of peace talks, can women bring something special to the negotiating table? In a way, the question is beside the point, according to the UN’s mediator-in-residence, Margaret Vogt. “It is critical for women to be at the negotiating table whether or not that has an effect, because they constitute more than 50 percent of the population,” Ms. Vogt said in an interview with the Global Observatory. “And if we are promoting democratic efforts, we should make sure that all the constituencies are at the table.”

Nonetheless, women can bring something special—if you choose the right women, Ms. Vogt said, “then they will bring to the table issues that are fundamental.” Drawing from her own experiences at peace talks, Ms. Vogt said that women involved in the peace process can raise the voices of women who are still experiencing violence on the ground, for example, even as the conflict parties deny that their attacks continue.

Women also raise issues that may not otherwise be on the agenda. The last Libreville peace agreement for the Central African Republic, in which Ms. Vogt and her team played a facilitation role, “has a provision which is the first of its kind, that [states that] the parties committed to end gender-based violence and to pay reparations to victims of gender-based violence,” Ms. Vogt said. This is because the women in the delegation and Vogt’s team pushed to get the language included, she said. “Unfortunately, that hasn’t stopped [the conflict parties] from committing offenses,” she added, “But at least they committed to an agreement that holds them to the fire.”

Ms. Vogt suggested that it’s difficult to get women to the negotiating table in practice because warring parties do not want to share power: “It’s a power game. And in most of these games, women are not there. So, when it comes to discussing peace on the table, the participants—the negotiators—see it as an opportunity to renegotiate power, and they want to restrict the domain as much as possible.”

But if women are not part of the talks, it can have a long-term effect on their political participation, “they are excluded in what follows—in any political arrangement that follows,” Ms. Vogt said.

There are a number of tools and tactics that can help international mediators to include women’s voices in peace negotiations, according to Ms. Vogt. For example, she described having a gender advisor while serving a special representative of the secretary-general in the Central African Republic as “extremely useful.” The advisor “became a conduit of the views of women within the communities to the negotiating table,” said Ms. Vogt, and was able to “coach the women in the delegation to help them couch their issues and to present them.”

The interview was conducted by Marie O’Reilly, associate editor at the International Peace Institute.

Marie O’Reilly: My guest in the Global Observatory today is Margaret Vogt, mediator-in-residence at United Nations headquarters and formerly special representative and head of the United Nations Integrated Peacebuilding Office in the Central African Republic. Thank you so much for being with us today, Margaret.

Margaret Vogt: Thank you, and it’s a pleasure to be here.

MOR: Ms. Vogt, your current post at headquarters allows you to reflect on your experiences and draw lessons for future UN mediation endeavors. Today, I’d like to talk in particular about women in mediation and in peace processes. What effect can it have on peace processes when women are at the negotiating table, whether as mediators, members of negotiating delegations, or in some other form?

For example, in the processes that I have handled, I have tried to go to the grassroots to really identify women who know what is happening within their communities, who have the courage to speak up and to speak out, to the issues affecting their community, who can tell truth to power and say, “No, it is not true that the rebels have stopped attacking, because they are still attacking us. It is not true that the government has stopped arresting people indiscriminately, because it is still happening.” So, it is important to have the right women at the table, just as it is important to have the right men.

MOR: If it is so critical—and I think it’s widely recognized on paper that it is—why is it so difficult to get them to the table in practice?

MV: Because, in the final analysis, the conflict is about power, and it’s a power game. And in most of these games, women are not there. So, when it comes to discussing peace on the table, the participants—the negotiators—see it as an opportunity to renegotiate power, and they want to restrict the domain as much as possible. They don’t want competition for sharing. Unfortunately, even people who you think would support the participation of women—even many civil society groups who you think would welcome the participation of women—come with men, because they know that this is [their] opportunity to get into the game, and [they] don’t want competition.

So, women have to understand the fact that it all boils down to negotiating for power. And we have to, as members of the international community, position them—because they do deserve to be there. They do deserve to be there to ensure that in the final configuration of whatever comes out, they will be represented. Because most of the time when they are excluded, they are excluded in what follows—in any political arrangement that follows.

MOR: What can the international community do—and in particular, special representatives of the secretary-general (SRSGs) and other lead mediators—what can they do to bring them to the table?

MV: I’ll tell you what I have done, and done successfully in many instances—and sometimes not so successfully. Number one: by insisting that there are international resolutions now on the need for women to be at the table. You use those instruments; you say, every delegation must have some representation of women. Where I have tried this, it has been very strongly resisted, but we have pushed it through. We wanted to ensure that at least there would be two out of the five. I started with three out of five. I ended up with many of the delegations with only one out of the five, but we insisted on it. If we had not insisted, the women would not have been there.

Secondly, I created a resource group of women, an advisory group to the SRSG of women who are known, who are eminent, and who are respected. And who I could bring—I [didn’t] need anybody’s permission to bring them! So I could bring them to the table to be part of the discussion. We had resistance sometimes, but we found a way to get their voices in. So, we can do more of this. As representatives of international organizations, [we can] insist more, use our own good offices more, and use our own powers more to push the agenda. But, it is critical for us, and I learned this from experience, to ensure that the women we bring in are women who really will speak for the women, because it is not always evident.

MOR: When you did bring women in as part of the negotiating delegations, or in your resource group, what impact did it have on the outcome?

MV: We were able to introduce issues that would not have been there. For example, in the Central African Republic, the last Libreville peace agreement has a provision—which is the first of its kind—that [states that] the parties committed to end gender-based violence and to pay reparations to victims of gender-based violence. Unfortunately, that hasn’t stopped them from committing offenses. But, at least they committed to an agreement that holds them to the fire, and this was possible because we pushed so hard. We worked through the women in the delegation to put these issues on the table.

MOR: Did you find it was useful to have a gender adviser at your side when you were working in the Libreville negotiations, for example?

MV: Extremely. It was extremely useful to have a gender adviser throughout the conflict situation. Many of the women who are impacted at the grassroots level in the communities feel they have access to the SRSG through the gender adviser. Because we had been so active in the communities and in the provinces, they all had her telephone number. So, when things erupted, they called her, “Please tell the SRSG that this is happening. Please tell the SRSG that this is what we want, that this is what we would like to see.”

So, she became a conduit of the views of women within the communities to the negotiating table. And she was able to give me an update of what was happening. So, when we were in Libreville, I could tell the heads of states, “Look this is happening in Bria; this is happening in Bossangoa, because the women have just called me to tell me so.” She was the conduit of that, and it became very powerful. So, when some of the rebel groups were saying, “No it’s not happening,” I had counter information, and I was able to put it on the table.

Secondly, she did a lot to coach the women in the delegation, to help them couch their issues and to present them. She also did a lot of coaching with my women’s resource group to help them draw up a strategic plan and to help them position themselves to influence, in a situation that is extremely difficult, where the role of women is not well accepted. You know, it’s an uphill battle. So we need more of that.

MOR: So do you think if the lead mediator or the SRSG is not a woman, for example, a gender adviser could really play an important role there?

MV: Me, as a woman, I needed a gender adviser because I couldn’t be everywhere and not everybody could reach me. But through her, they knew that they could access me. An SRSG that is a man would also require that kind of resource. I think we need more than one. We need a whole team of people. My poor gender adviser had to run around like a headless chicken because she was the only one. Can you imagine if we had two or three doing that?

MOR: There are still very few women in senior peacemaking positions at the UN. Why do you think that is?

MV: For the same reason, isn’t it? It’s all about power. Politics is about power. How many delegations that are represented in the UN? How many women are heads of their delegations even in the UN here? We could do a head count. The situation has improved, but it still leaves a lot to be demanded. The secretary-general has done a lot to increase the number of women that he has appointed into senior positions. He has really made it his cardinal focus to target women and to promote them. But others still have to play their role. More women have to be given the opportunity to serve their country, because it is an opportunity for service. Somehow, when it comes to women, the qualifications hit the roof!

MOR: Ms. Vogt, thank you very much for your time today.

MV: Thank you very much.