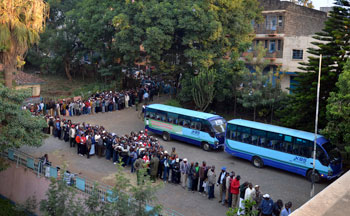 Six years ago, the United Nations General Assembly declared September 15th the International Day of Democracy, an annual event to assess the progress of democracy around the world.

It may seem strange to some that a body that counts representatives from Nicaragua, Qatar, and the Kingdom of Bahrain among its presidents in the last decade should present itself as a promoter of democracy. After all, the UN is a member-state organization with clear nondemocratic elements. Its membership includes many authoritarian states, and its internal structure and procedures often diverge greatly from the ideals of liberal democracy. Notably, the UN’s most powerful body, the Security Council, is unrepresentative, dominated by five permanent veto-wielding members, without a single African or Latin American country among them.

The UN is not a democracy of the world, nor does it claim to be. Rather, it is an international organization with 193 members founded on a commitment to state sovereignty, whether the state is democratic or not.

However, the UN is also a values-based institution that carries at its core a commitment to democratic principles. Although the UN Charter does not mention the word “democracy,” Article 1(3) cites “promoting and encouraging respect for human rights” as a primary purpose of the organization, and the Universal Declaration of Human Rights, adopted by the General Assembly in 1948, declares that regular elections and “the will of the people shall be the basis of the authority of government.”

In fact, each year the United Nations system conducts a host of activities supporting democracy worldwide. Through a variety of agencies and departments, including the UN Development Program, the UN Department of Political Affairs, the UN Democracy Fund, and the Office of the High Commissioner for Human Rights, the system provides direct technical assistance to countries organizing elections and promotes the growth of institutions vital to the rule of law.

Thus, the UN as a whole works to support democratic norms, but it is also structurally committed to the sovereign equality of states, no matter what their form of government. And at times, this dual commitment to both independent states and free individuals creates a tension at the center of the international system.

Whether this tends to be a productive or a destructive tension is open to question. It can be productive when it leads to normative developments in international affairs, such as the recognition that both states and the international community have a responsibility to protect civilians from atrocity crimes. This was evident in the aftermath of the 2008 election-related violence in Kenya and in the rapid response to potential atrocities in Libya in 2011. But it can also be destructive when, for example, an authoritarian leader such as Zimbabwe’s Robert Mugabe is insulated from international criticism or a major power, such as Russia, uses its Security Council veto to shield a client state like Syria on the grounds of national sovereignty.

Which tendency comes to the fore depends upon how one balances the need to remain committed to the principle of the sovereign equality of states—which is fundamental to the legitimacy of international law—and the need to fulfill what Sir Brian Urquhart has called “the imperatives of international responsibility.” And this is no easy circle to square.

The UN’s legitimacy is based in its universal membership, and in order to fulfill its function of facilitating diplomacy and the quest for multilateral solutions to global problems, it must represent its entire membership and remain impartial among its members. However, as Kofi Annan wrote, “Impartiality does not—and must not—mean neutrality in the face of evil; it means strict and unbiased adherence to the principles of the Charter—nothing more, nothing less.” And prominent among these fundamental principles is that the will of the people is the basis of authority.

What does this mean for the UN’s commitment to democracy today? Admittedly, the UN promotion of the norms of democracy and human rights has always been in part aspirational, meant to guide practice along a gradual, evolutionary curve toward a future fulfillment of potential. Thus, it is altogether fitting to take the International Day of Democracy as an occasion to reflect upon how far we have come and upon how far we have to go and to remind the world, and the UN itself, that the commitment to advancing democracy is indeed at the very heart of the UN mission and all that it stands for.

About the photo: Voters queue up to cast their ballot in Kenya’s general election, March 4, 2013. (Commonwealth Secretariat/Flickr)