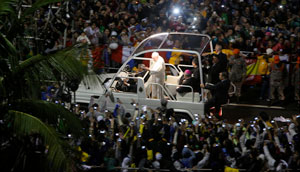 An hour after arriving in Brazil last month to celebrate the Vatican’s World Youth Day, Pope Francis found himself in the midst of one of Rio de Janeiro’s notorious traffic jams when his driver took a wrong turn and ended up in a side street crowded with parked buses.

As hordes of jubilant youth surrounded his car and reached in the open window to touch him, the broadly smiling Argentine Pontiff artfully seized upon the occasion to spread his intended message that the Roman Catholic Church was now more open, cheerful, and accommodating than it had been under his distant and censorious predecessor, Pope Benedict XVI.

But the Brazilian organizers were aghast at the internationally televised gaffe, and their discomfort only intensified in the days following.

A two-hour power failure on the subway system kept tens of thousands of young pilgrims from a massive seaside religious celebration on Copacabana Beach; a drastic shortage of buses and an absence of informational kiosks throughout the city stranded additional thousands trying to attend other gatherings, and the failure to protect a mud-prone inland religious site from steady rain forced authorities into a last-minute switch moving the closing Papal mass for 2.5 million worshipers back to Rio.

The context for these repeated collapses in public administration could not have been worse for the Brazilian government. The country had just been convulsed by massive demonstrations in some 80 cities by people protesting patronage and corruption, wasteful public spending, bad schools and hospitals, police brutality and other abuses of power.

And significantly in the current instance, the country now faces the challenge of staging the World Cup next year and the Olympics in Rio in 2016. Among the reasons for the protests in June were the mammoth cost overruns on the stadiums being built and renovated, so Brazil’s ability to stand the strain of staging the games was already a hot topic with the Brazilian public.

The country’s largest weekly, Veja, was unsparing in its assessment.

“Rio has not passed the test,” the magazine headlined its coverage. “With errors in security, thousands of people without transportation and lots of last minute improvisation, Rio has been humiliated when it comes to organizing mega events. They’ll have to do a lot better to avoid making a mess of the World Cup and the Olympics.”

Commentators immediately linked the failures with the falling fortunes of the ruling Workers Party, which has run Brazil for the past ten years, first under the popular two-term President, Luiz Inácio Lula de Silva, and then under his hand-picked successor, Dilma Rousseff. It has been a decade in which millions of Brazilians rose from poverty into the middle class, college enrollments doubled, employment and wages grew spectacularly, and social inequality diminished.

But the protests showed that this growth in the middle class had created higher levels of expectation among Brazilians and a new vocal assertiveness in the public for having those expectations addressed by the country’s self-aggrandizing political class.

Until the protests, Ms. Rousseff had enjoyed what most people thought was an unassailable lead in the presidential elections next year. But new polls show her approval rating suddenly halved, to 30%. The party, whose motto is “Of the People, For the People, Through the People,” was clearly caught unprepared for this popular uprising. “We are all perplexed,” said Devanir Ribeiro, a Workers Party congressman from São Paulo.

Ms. Rousseff responded to the protests with a series of rush proposals ranging from holding a constitutional assembly or a national plebiscite to reducing the size of her overpopulated 39-minister cabinet to providing emergency funding for the country’s stressed transportation system to bringing in doctors from abroad to staff clinics in poor neighborhoods. They were all rejected or ridiculed.

Meanwhile, the wild success of the self-effacing first Latin American Pope in declaring the church on the side of justice for the neglected margins of society and his encouragements to the assembled youth to struggle against complacency (“the church must be taken into the streets,” he said) only threw the widespread public disappointment with the nominally populist government into even greater relief.

The weeklong trip of the 76-year-old Pope to Brazil and the rock star devotion he aroused among the estimated 1.5 million young people who had flocked to Rio was a triumph for the newly elected Pontiff. But O Globo columnist Dorrit Harazim cautioned the government against taking any satisfaction of its own in this.

“As we have seen,” she wrote, “the youths have an infinite patience to handle these public service catastrophes with good heartedness and songs. No one should imagine that the tolerance of the fans at the World Cup and the tourists coming here for the Olympics will be so angelic.”