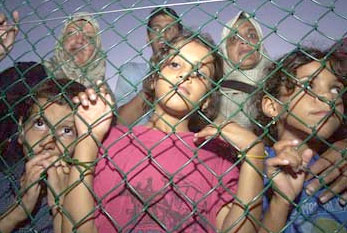 A proposed policy to relocate asylum seekers in Australia to Papua New Guinea could tarnish the country’s image as a champion of human rights, said Dr. Khalid Koser, deputy director and academic dean at the Geneva Center for Security Policy.

“It seems to me that Australia, as a relatively small country, trades on its international reputation. It’s a champion of multilateralism, it’s a champion on human rights, it has a very strong record on managed migration, on refugee resettlement, and those sorts of issues,” he said.

“A policy like this does make people ask questions about Australia. Perhaps big powers—the USA, the UK—can get away with doing this and not damaging their international reputation, but I think Australia needs to be aware of the negative consequences of doing this.”

Mr. Koser pointed to policies developed in the European Union as a possible model for dealing with this complex issue, saying that collaborative policies that weren’t just about restriction, but also about development and capacity building, seem to have had some effect in the European Union. “And so I’d certainly urge Australia not just to focus on restriction—although restriction is clearly an important part of the picture—but also to think more broadly about the other policy elements that are needed in this case,” he said.

The interview was conducted by Bianca Selway, a research assistant at the International Peace Institute.

Bianca Selway: I’m here today with Dr. Khalid Koser, deputy director and academic dean at the Geneva Center for Security Policy, a nonresident fellow at the Lowy Institute, and an expert in international migration. Dr. Koser, thank you very much for speaking with the Global Observatory today.

Khalid Koser:  I think the first thing to note is this policy that has been adopted by the Australian government hasn’t actually yet passed through the courts, and a legal appeal was launched recently to try to stop it, so there’s still some controversy around it. But you’re right, certainly, the government is pursuing a new regional resettlement arrangement.

UNHCR, the refugee agency, has been quite critical of the proposed policy, and what they’ve made clear, in response to your first question, is even if Australia chooses to relocate people claiming asylum in Australia to another country, which is their proposal, Australia still has international obligations to those people. This policy should not and does not in any way reduce Australia’s commitment to these people who are trying to seek asylum in Australia.

In response to the second part of your question: I think this policy—and indeed, the alternative policies that are being discussed by the opposition at the moment in Australia—do risk undermining Australia’s otherwise excellent reputation in the international sphere. It seems to me that Australia, as a relatively small country, trades on its international reputation. It’s a champion of multilateralism, it’s a champion on human rights, it has a very strong record on managed migration, on refugee resettlement, and those sorts of issues.

A policy like this does make people ask questions about Australia. Perhaps big powers—the USA, the UK—can get away with doing this and not damaging their international reputation, but I think Australia needs to be aware of the negative consequences of doing this. I think back to the John Howard days when the so-called Pacific Solution was introduced and a very similar diminishment in Australia’s reputation took place. I’m based in Geneva, and I can tell you now in Geneva Australia’s stock is reducing among certain people as a result of this policy.

BS: What effect can an increased influx of asylum-seekers have in fragile states, like Papua New Guinea?  Do examples from elsewhere suggest this could exasperate tensions over access to resources in PNG, for example?

KK: It’s an important question in two ways. Firstly, we need to think about the implications of this policy for Papua New Guinea, but also, of course, the implications for the people who it’s been proposed will move there. There are examples— for example, Greece, where there has been a real concentration of asylum-seekers and some irregular migrants as well crossing the border from Turkey into Greece, many of them hoping to move into the European Union. This has placed enormous pressure on the Greek economy, which, as we know, is a rather fragile economy. It’s certainly placed pressures on accommodation, housing, the health sector, the education sector, and so on and so forth.

It’s also clearly exposed the asylum-seekers and the irregular migrants themselves to vulnerability, and if you look at reports by Human Rights Watch and Amnesty International, you’ll find some fairly damning reports on the conditions in which people are being dealt with and looked after in Greece. Of course, this risks being a vicious cycle: if Greek people resent asylum-seekers arriving in Greece then xenophobia arises, and I can imagine that happening in Papua New Guinea, too.

Some are concerned that Papua New Guinea is a poor state, is a state, for example, that doesn’t have a particularly good record on homosexuality. And so issues about whether you’re going to relocate homosexual asylum-seekers and what might happen to them in that circumstance are important issues to discuss.

What this means is you face a situation where a country that doesn’t have much of a track record in processing asylum applications is now going to have a larger number of people to process. Where people get asylum they will supposedly be resettled in a country that hasn’t got a record in resettling large numbers of migrants. And where they don’t get status, Papua New Guinea needs to find a way to repatriate them to their home countries. Now, even the most advanced countries in the world find that hard to do, and I think Papua New Guinea will struggle as well.

BS: Are there any lessons that other regions or countries could take from Australia’s political and policy experiences in this regard?

KK: Australians and the Australian government often resist international comparison and to an extent they’re right: they’re a fairly isolated country, they don’t have the contiguous borders, for example, of the European Union; they are, with the exception of Papua New Guinea, distant from many of the countries from which poor people are trying to move and arrive in Australia.

But still, I think there are some comparisons to be made. Looking at how the world can learn from Australia, I think, honestly, the lesson to learn is that this race to the bottom, this idea of trying to make Australia as unattractive a destination as possible for asylum-seekers, is not a particularly sensible policy. There is no clear evidence it will work. It’s not clear whether the courts will even allow it to take place. And as we discussed, I think it risks tarnishing Australia’s reputation.

Australia may be difficult to compare with other countries in the world, but I still think it can learn lessons from other parts of the world. During the mid-1990s there was a huge spike of asylum-seekers in the European Union—something like 700,000 people a year. Now that’s down to around 200,000. Through collaboration and cooperation—and joined-up government and policies that weren’t just about restriction, but also about development and capacity building and a kind of suite of policies—seems to have had some effect in the European Union. And so I’d certainly urge Australia not just to focus on restriction—although restriction is clearly an important part of the picture—but also to think more broadly about the other policy elements that are needed in this case.

BS: Part of the impetus behind the new Australian arrangement lies in the increased number of asylum-seekers arriving by boat, predominately from Afghanistan and Iran. How do you think the situations in Iran and Afghanistan and other recent conflicts such as Syria have changed global migration trends more generally?

KK: You’re right that certainly historically, and even recently, so-called boat arrivals—IMAs, Irregular Maritime Arrivals—in Australia have been dominantly Afghans and Iranians. One of the interesting new trends however is that recent boat arrivals over the last few months in Australia have carried a whole range of other nationalities: Lebanese, Taiwanese, some sub-Saharan Africans, and so on and so forth. So, this focus on Iran and Afghanistan seems to be diluting into a range of other nationalities, too. I think the answer to that is about smugglers and how smugglers operate.

In defense of the Australian government, I think we also need to recognize that some sort of policy response is required. The number of people arriving by boat in Australia has increased dramatically over the last two or three years to a level where I think it’s unsustainable and where the government needs to be seen to act. Now, as we’ve discussed, I‘m not sure that a restrictive policy is necessarily the best way to act, but Australian citizens will be quite right to expect their government to do something. These are now significant numbers of people. To an extent, the number of people who arrive in Australia and other parts of the world are not determined by policies in those countries; they are determined by what happens in the countries from which people are fleeing.

I was in Kabul two weeks ago and it’s fairly clear to me that the prospects for security and peace and economic growth and political stability in Afghanistan are going to deteriorate over the next year, and not increase. I predict more flows of people leaving Afghanistan. Of course, most of those will go locally to Iran and Pakistan. I predict that many of the millions of refugees who are currently in Iran and Pakistan, rather than risking going back to Afghanistan, will move further afield, and I think Australia is one of the destinations. We’ve already had increases in Afghans arriving or trying to arrive in Australia. There are certainly increases in Turkey as well. So the dynamics in countries such as Afghanistan and Iran and Syria, as you’ve mentioned, may be a long way from Australia, but they do have a direct impact.

My prediction is that the number of people arriving by boat will increase irrespective of the policies that the Australian government is trying to introduce. My answer to this, and I would urge the Australian government to do this, is to manage expectations. I think it’s a mistake for either of the contenders for the election to say to the Australian public that they will stop the boats, because they won’t. And I think that you need to learn to manage expectations and to say that Australia has a wonderful record of managed migration. There is, unfortunately, a small element of migration that is out of control, that is unmanaged. But in a global perspective, this is still a relatively small number of people. We cannot stop the boats, but will do our best to manage them. I think that would be the realistic and honest thing to say to Australian voters.

BS: Thank you so much for your time. It’s been an absolute pleasure having you interviewed for the Global Observatory.

KK: Thank you very much. The pleasure is all mine.