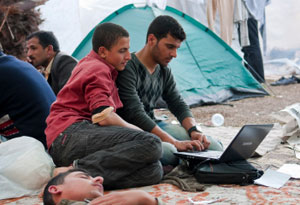 The volume of data generated by disasters is skyrocketing. During the Boston Marathon bombing, more than 500,000 tweets related to the explosions were generated in a few hours after the attacks, according to researchers at Syracuse University.

The exponential growth in streams of data generated during disaster events are not the only ways information communication technologies (ICT) are complicating humanitarian action. Governments from Sudan to Syria have reportedly attempted to block and interdict civilian communications, preventing whole populations from digitally dialing 911.

While crowd-sourcing, high-resolution satellites, smart phones, and social media are transforming the operational landscape for responders and affected populations alike, recent incidents such as these have made apparent the lack of best practices and professional ethics—and the absence of intentionally designed systems—for using and accessing ICT during complex disasters.

In this dynamic context, humanitarians are struggling to adapt not only their methods to the networked age, but their theory and practice as well. The present lack of doctrine and international legal precedent to guide ICT use during disasters is arguably one of the most urgent issues facing humanitarian responders in the 21st century.

Two important publications this past April began to confront some of these gaps in theory and practice. The UN Office for the Coordination of Humanitarian Affairs’ (OCHA) published Humanitarianism in the Networked Age, and the International Committee of the Red Cross (ICRC) released an updated version of Professional Standards for Protection Work. The OCHA report is the first major UN document to acknowledge “information as a basic need in humanitarian response,” and the ICRC protection standards now begin to take into account the implications new technologies have for human security.

However, the crucial question that remains unanswered is whether an inherent human right to information during emergencies exists.

If the answer is yes, then a second equally consequential question follows: What obligations do states, humanitarian agencies, and the private sector have to realize this right?


The prevailing approach to issues raised by ICTs and emergencies, as demonstrated by the OCHA report, only addresses these topics in terms of the needs of populations. What is currently absent from the discussion is: What rights do affected populations have to information, and are they able to access it in a timely and safe way, especially when their lives may depend on it? The difference between the two approaches is stark and significant.

At present, the international community, companies, and aid providers are not explicitly obligated to share unique information they may have that is relevant to populations affected by conflict and natural disaster. Also, governments, corporations, and aid groups do not have an articulated and correspondent responsibility to provide those communities with the technical and programmatic infrastructure they need to consume that information.

As such, the needs-based approach to ICT during emergencies falls short of the new and evolving challenges vulnerable populations face. But a rights-based approach could overcome these challenges. The increased recognition of the right to health due to the work of Dr. Jonathan Mann, the former head of the World Health Organization’s global AIDS program, and others, provides a potential framework towards a specific right to information during disasters.

Such a rights-based approach would place potentially life saving and life sustaining information, including the right to access it, in the same protected category within international human rights standards as food, water, basic shelter, and medical assistance. Relatedly, the ability to invoke governmental classification, proprietary ownership of data, or state and corporate control of telecommunications infrastructure as reasons for withholding access to information during disaster would likely be limited.

Given the politically, legally, and operationally contentious questions that a rights-based approach to ICT and emergencies would raise, it is not surprising that international organizations, governments, and others appear to be in no rush to address whether a right to information during disaster exists. But within the Universal Declaration of Human Rights, there is a clear basis for a rights-based approach to these questions. Article 3 of the Declaration states, “Everyone has the right to life, liberty and security of person.”

Realizing the right to life, liberty, and security of person is increasingly codependent in the 21st century on ensuring access to ICTs and the capacity to utilize them. As the conflicts in Syria and Sudan show in painful relief, the ability of populations to send and receive information they need to receive aid and request assistance should also be seen through a human rights lens, rather than a strictly humanitarian one alone.

Continuing to pursue a needs-based only approach to new technologies and humanitarian action inevitably relies on the expectation of charity rather than the legal requirements provided by rights. Given the implications of ICT-use and access for the health, safety, and survivial of disaster-affected populations, a needs-based approach to information and disasters no longer suffices.

Nathaniel A. Raymond is Director of the Signal Program on Human Security and Technology at the Harvard Humanitarian Initiative.

About the photo: A man works his computer during anti-government demonstrations in Tahrir Square, Cairo, Egypt, February 9, 2011. (iStockphoto)