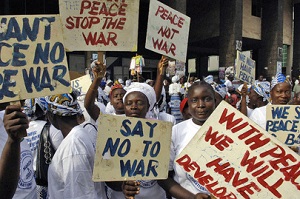 In Mali, women have borne the brunt of widespread sexual violence in the recent conflict, while simultaneously facing significant barriers to participating in efforts to resolve that conflict. In Côte d’Ivoire, the flow of small arms and light weapons has contributed to high levels of sexual violence. In South Sudan, serious concerns regarding the protection of women, including against sexual violence, are compounded by challenges to women’s access to justice, and by women’s continued exclusion from the ongoing peace talks.

On June 24th, the UN Security Council weighed in once more on its role in addressing these interrelated issues on its “women and peace and security” agenda. The council adopted Resolution 2106—its sixth resolution on women, peace, and security—unanimously, as it has always done in relation to this theme. While this resolution provides new language for policy-makers, it leaves significant women, peace, and security issues still on the table to be implemented, and it highlights the council’s struggle to effectively address the thematic issues on its agenda.

The challenge for women, peace, and security, first formally brought onto the Security Council’s agenda in 2000 with Resolution 1325, has long been the pulling together of its various threads of policy and practice. It is an issue that encompasses women’s roles and concerns in conflict prevention, conflict resolution, protection, and postconflict reconstruction. It covers the most technical of issues involved in disarming, demobilizing, and reintegrating combatants and reforming the security sector, to the broadest questions of how gender equality is fundamental to human security. It is an agenda that is the responsibility of member states, particularly those in the Security Council, as well as of UN entities and civil society.

The newly adopted Resolution 2106 primarily focuses on operationalizing existing obligations rather than on creating new structures or initiatives. It addresses the work of UN missions, particularly regarding gender advisors and women protection advisors, and the specifics of disarmament programs and security sector reform. It contains new and robust language on service provision for survivors of sexual violence and also incorporates recent policy developments: its preambular paragraphs reference the new G8 declaration on sexual violence in conflict and the new Arms Trade Treaty, which includes groundbreaking language on gender-based violence.

Yet the broader women, peace, and security agenda is unique and invaluable in its recognition of women’s agency and equality, and recognizing the particular impact conflict-related settings have on women and girls. The agenda is not about women and girl’s victimization. Even within the context of protection of women, it is not solely about sexual violence in conflict but about the full range of violations of women’s human rights that are of concern.

For example, women’s place at the negotiation table—in all levels of decision-making, in fact—is not deserved because of their subjugation to sexual violence, but rather because women have the right to fully participate in decision-making regarding the future of their communities, and to have barriers to that decision-making that are based on gender discrimination fully dismantled.

Effectively addressing women, peace, and security issues is indeed fundamental to the daily work of the council. Women’s participation is vital for conflict prevention work, a core component of the council’s mandate to maintain international peace and security.

Having adopted four resolutions focusing on sexual violence in conflict, there is now a need for the council to ensure it takes the requisite concrete steps on the participation and prevention aspects of the women, peace, and security agenda. However, the council seems to be challenged as to how it will recognize the full scope of the agenda in practice.

The difficult negotiations leading up the adoption of this resolution demonstrate that the more concrete the work of women, peace, and security becomes, the more it has the potential to be held hostage to national and regional interests. The women, peace, and security agenda demands accountability for human rights violations, including sexual violence in conflict, and reaches into the most political of issues, such as whose voices determine the future of a country emerging from conflict. But Resolution 2106 goes out of its way to reassure member states of their territorial integrity. And, despite the opportunity to draw on agreed language from the recent G8 declaration in April, the key role of women human rights defenders is not mentioned in the resolution. Finally, the absence of reference to the work of the Special Representative of the Secretary-General on sexual violence could be seen as an indicator of the council’s ongoing internal tension over the scope of the mandate of that office.

Other thematic issues (as distinct from country-specific issues) are facing similar challenges in the council. It appears the more the thematic agendas have relevance to real world situations, and thus the potential to bring these politically charged situations into the council, the more thematic resolutions will become the locus of political discord.

Ultimately, it is in conflict-affected countries where women’s rights continue to be abrogated—from Mali, Côte d’Ivoire, and South Sudan to Afghanistan, Syria, and beyond—that the effectiveness of Resolution 2106 and all other tools at the council’s disposal will be tested. These are country situations of which the council should remain rightly seized, for these policy frameworks matter only as much as they support the women and their communities whose lives have been upended by conflict. For the Security Council to retain moral as well as political legitimacy, it would do well to act on behalf of the women, men, and children around the world whose lives are at put at risk by current approaches to international peace and security.

Sarah Taylor has researched and written extensively on women and conflict, and is currently the Executive Coordinator of the NGO Working Group on Women, Peace and Security.

About the photo: Women in Monrovia, Liberia stage a peaceful sit-in protest against gender-based violence in 2007. UN Photo/Eric Kanalstein.