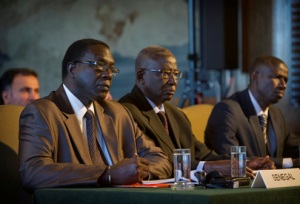 International criminal justice has been accepted by many in Africa, though one may not get that impression from listening to some African leaders; the May 2013 African Union (AU) summit in Addis Ababa saw several leaders denounce the “racist” nature of the International Criminal Court (ICC).

The June 30 arrest in Senegal of Chad’s former president Hissene Habre, after 13 years of judicial proceedings, was a big reason to celebrate “International Criminal Justice day,” a day created by the ICC in 2010 to commemorate the entry into force of the Rome Statute on July 17, 2002. But there are tensions between the ICC and African leaders, and although thirty-four African countries are among the 122 states parties to the Rome Statute, international criminal justice in Africa has yet to be fully embraced.

Exiled in Senegal since 1990, Chadian dictator Hissene Habre was finally charged on July 2, 2013, with war crimes, crimes against humanity, and torture committed during his eight-year violent rule marked by an estimated 40,000 political killings. Initiated in 2000, the judicial proceedings against Habre were durably stalled under former Senegalese president Abdoulaye Wade. The proceedings were accelerated by a 2012 decision of the International Court of Justice, which called on Senegal to either try former president Habre without further delay, or extradite him.

Under pressure, Senegal agreed in August 2012 to an African Union plan to try the former leader before a special court in the Senegalese justice system, which would be comprised of African judges appointed by the AU. Inaugurated in February 2013, the Extraordinary African Chambers is mandated “to prosecute the persons most responsible for atrocity crimes committed in Chad between 1982 and 1990.” The court’s budget, estimated at about $10 million USD, is funded by international donors including Chad, the European Union, the Netherlands, the AU, the United States, Germany, Belgium, France, and Luxembourg.

Considered a victory for the victims, Hissene Habre’s indictment and long-awaited trial constitute an example of the successful combination of democratic rule in Senegal with the election of President Macky Sall in April 2012, and regional and international partnerships to advance international justice, deter human rights violations, and build lasting peace.

In Africa, the international community’s efforts to promote justice have resulted in the ICC taking on 18 cases in eight situations involving, among others, current Sudanese President Omar al-Bashir (under arrest warrants since 2009); recently elected Kenyan leaders Uhuru Kenyatta and William Ruto; Saif al-Islam Gaddafi, son of the former Libyan leader, and his former intelligence chief Abdullah al-Senussi; as well as former Cote d’Ivoire president Laurent Gbagbo and his wife. The eight African situations–six of which were submitted voluntarily by the countries concerned–are the only ones so far considered by the ICC. As a result, regional leaders have increasingly expressed their concerns about a selective and targeted application of international justice; a situation which led to accusations of racism voiced by the current rotating chairperson of the AU, Ethiopian Prime Minister Hailemariam Desalegn, among other leaders, at the end of the AU summit in Addis Ababa in May this year.

The simmering tension between the AU and the ICC has its roots in the lack of response from the UN Security Council to the AU’s calls to defer the ICC proceedings initiated against Sudanese President Bashir–indicted for war crimes, crimes against humanity and genocide allegedly committed in Darfur where an estimated 300,000 people have died since 2003–and against Kenyan President Kenyatta and his deputy, both indicted for their role in the 2007-2008 post-election violence in Kenya in which 1,200 people died, around 600,000 others were displaced, and 900 cases of rape were documented.

Adding to the strain, the week celebrating international criminal justice saw the ICC calling on the Nigerian authorities to arrest President Bashir, who was attending an AU summit on HIV/AIDS, Malaria and Tuberculosis in Abuja. To the anger of human rights and civil society groups, the Nigerian government justified its decision to host the indicted leader by citing its obligation to comply with an AU decision that its members should not cooperate with the ICC in executing the warrant against the Sudanese president. President Bashir eventually left the summit before its end, officially to attend to other engagements. In addition to Nigeria, the Sudanese leader has visited several countries since his indictment by the ICC, including Chad, Djibouti, Ethiopia, Kenya, and Malawi.

Besides calling for the arrest of President Bashir, the ICC rejected on July 15 a request by Kenyan Deputy-President William Ruto to have his trial, which is due to start on September 10, moved from The Hague to Kenya and Tanzania, presumably to facilitate the pursuit of his political duties while attending the court. The ICC’s judgment follows a decision taken by AU leaders at their May 2013 summit in Addis Ababa–with a unique reservation by Botswana–which endorsed a request for referral of the Kenya investigations and prosecutions to allow for a national mechanism to examine the cases under a reformed judicial system. Since the adoption of a new constitution in 2010, the new Kenyan legal system is considered stronger and more independent. Nevertheless, for the ICC judges, “while in principle in favor of bringing (its) proceedings closer to the affected communities,” the trial must be held in The Hague due to considerations including security, the “perception of the court,” the cost of holding proceedings outside the ICC’s headquarters, as well as the potential impact on victims and witnesses.

The AU regularly reiterates its commitment to combating impunity and promoting democracy, good governance, and the rule of law across the African continent. However, this commitment seems tempered by its statements that the search for justice must not hinder efforts to promote lasting peace and national reconciliation initiatives, a reason also used in the May 2013 decision on the ICC. While reconciliation efforts play a key role in building peace and restoring social cohesion in post-conflict societies, credible justice and accountability processes—especially those targeting leaders suspected of international crimes—should not be unnecessarily delayed or marginalized.

In the pursuit of lasting peace in Africa, the people who are already benefitting from international justice–and those who are still seeking it—should not be forgotten. And international efforts to this end, which can only be sustained by regional political will and a genuine sense of ownership, should not be ignored.

About the photo: ICJ rules senegal must prosecute or extradite former the Chadian President at The Hague, Netherlands, July 2012. (UN Photo/ICJ-CIJ/Frank van Beek)