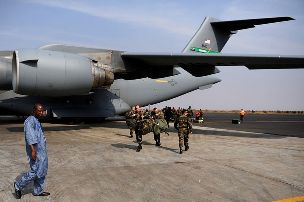 When France’s President François Hollande flew to Timbuktu and Bamako on February 2 to supervise the ongoing Serval military operation, the crowds welcomed him as their savior, chanting his name and waving the French flags that had been widely distributed (some had even painted themselves blue, white, and red). The scene was reminiscent of Benghazi in September 2011 when Libyans cheered the arrival of then-French president Nicolas Sarkozy and UK Prime Minister David Cameron with signs that read, “Vive la France.” (Of course, Benghazi and Libya have now plunged into a security-political turmoil, and no one knows where it will lead.)

At the start of the engagement, French authorities were quick to announce that their troops would withdraw gradually from Mali in early March. However, unsurprisingly, the French Minister of Defense Jean-Yves Le Drian has since revised France’s position, indicating that the military mission will take longer than expected. Now, it has been decided that French troops will remain in Mali alongside the deployment of the UN Multidimensional Integrated Stabilization Mission in Mali (MINUSMA), due to start on July 1. And a number of issues and security problems related to Mali and the Sahel region still remain.

The French military intervention may have helped to win back the cities of Gao, Kidal, Timbuktu, and the north of Mali, but, despite killing a large number of terrorists, most members of al-Qaeda in the Islamic Maghreb (AQIM) and the Movement for Unity and Jihad in West Africa (MUJAO) have fled Mali and are now hiding in the grey zones of the vast Sahel region stretching from the Atlantic coast to the Red Sea. There are even growing indications that many have found safe haven in southern Libya as well as elsewhere in the contiguous southern areas.

Furthermore, the deaths of AQIM’s leader Abou Zeid and other terrorists, along with the presumed killing of Mokhtar Belmokhtar—the mastermind behind the dramatic attack on the In Amenas gas facility in Algeria in January—will not change the regional landscape instability. Indeed, AQIM’s tentacle body remains well alive, and terrorists who are fighting a typical asymmetrical guerrilla war will continue to hit-and-run either in Mali or in neighboring countries, just as they did in In Amenas. In fact, the recent coup attempt in N’Djamena could well be a response to Chad’s military involvement in Mali.

It is now three months since Hollande’s visit and his call for a dialogue to resolve the Malian crisis, and there remains legitimate doubts about Bamako’s willingness to find a genuine and durable socio-political solution to this ongoing deep-rooted crisis and engage into an open and sincere dialogue, even with the National Movement for the Liberation of Azawad (MNLA). Further complicating this equation is that many believe that even if a political dialogue began, it could be a biased political disequilibrium favoring Bamako due to the French military involvement and influence.

Furthermore, it has been reported numerous times by human rights NGOs that the Malian army is taking revenge against the population in the north, especially against the Maures, Tuareg and Songhai. Similarly, the angry Malian population in the south perceives the Tuareg as those responsible for the current crisis in Mali, as well as behind the presence of the terrorists in the country. This can only widen the already dangerous divide between the north and south populations, and it is a serious issue the authorities must deal with quickly to prevent civilian chaos which would greatly undermine any possibility for stability and the unity of Mali.

Moreover, this ongoing Malian crisis also shows that terrorist zones such as the ones in Mali, Libya, Afghanistan, Iraq, and Somalia have a tendency to expand and overlap, providing extended refuge for terrorist groups. In January, an al-Shabaab terrorist cell was dismantled in Ethiopia, which may also indicate a transnational terrorist network.

What external military interventions such as the Serval operation largely do is nurture hatred and enlarge the number of people joining terrorist groups. Past examples indicate that such a strategy has counter-results. One reason then-US President George W. Bush failed in Afghanistan is that he never understood that defeating al-Qaeda and controlling a territory requires time and heavy logistics. The same mistake is being repeated in Mali. To control a vast desert territory requires deploying thousands of men who, once in place, realize that the terrorists they have come to neutralize have had ample time to disappear.

Both France and ECOWAS protagonists have failed to understand this basic rule. Moreover, national as well as foreign soldiers may engage in harassment, torture, and even murder of the local population, as the recent example of Afghanistan indicates, which led President Hamid Karzai to demand US Special Forces leave the strategic Wardak province.

Before a Malian cheering crowd, a French soldier responded to a France 24 journalist by saying: “On ne sait pas où l’on va mais ça nous donne de la force” (We do not know where we’re going, but it gives us strength”). This statement says it all. Indeed, it is difficult to perceive any tangible long-term vision and strategy from both Bamako and Paris. And yet, that is precisely what Mali and the wider Sahel region need. A crisis response requires a clear strategy and must be planned before the launch of a military operation. It is, however, difficult to believe that any serious military strategy was conceived before the Serval operation was launched.

This is why Washington (despite Joe Biden’s official posture in Paris in February) and Berlin have not been enthusiastic about the French military intervention. After their experience with Iraq and Afghanistan, they better understand the risks taken with operations that never resolve the internal problems. As the German Defense Minister Thomas de Maizière accurately stressed, “Today, military superiority in the classic sense of the term does not guarantee that conflicts will be resolved in a sustainable manner. Just because you have a hammer, does not mean every problem is a nail.” Moreover, as the French researcher Marc-Antoine Pérouse reminds us, a war is likely won with a mixture of 10%-20% military force and 80% political will and propaganda. In other words, it is a strategy of winning hearts and minds, which the Americans learned through their failure in Vietnam.

In order to defeat AQIM in the Sahel, the central authorities of Bamako, Niamey, and elsewhere have to understand that they must ally with their local respective populations who can in turn make their communities inhospitable for terrorists to operate in. Any other forcibly option is bound to fail. Today, there is an urgency to engage in an inclusive national dialogue comprising all components of the Malian society. It is important to remember that the Tuareg issue is based on ethno-nationalistic tensions, and therefore can only be resolved through socio-political and economic negotiations for an equitable share of power.

Likewise, the central authorities of Bamako need to resolve the internal quarrels lurking behind the façade of unity between the army and the interim Malian president Dioncounda Traoré, including the question of elections. The most optimistic in Bamako believe that these could be organized by July 28, 2013. However, it would be extremely difficult to have fair elections given the current situation, as there are an estimated 230,000 displaced people inside Mali and over 150,000 Malian refugees who have fled to neighboring Mauritania, Niger, Burkina Faso, and Algeria. With ten weeks to go before the proposed election day, it would be impossible for those refugees to return to their respective homes and cast their vote.

“The return of many young Malians trained in Libya to manipulate arms appears directly linked to the ongoing confrontations. And the situation is worsening.” This quote, from the cabinet of the African and Malagasy Affairs of the Quai d’Orsay, was written in 1991, twenty-one years before the coup against Amadou Toumani Touré in March 2012. In the same writing, the author also found a deep feeling of marginalization by the Tuareg, the absence of constructive political dialogue from Bamako and even racism against the same Tuareg population. History is repeating itself. It is, however, important to understand that Tuareg are a large component of the Malian population whose socio-political and economic claims have too often been neglected by the central government of Bamako since Mali’s independence.

A fleet of French jets and tanks may temporarily defeat AQIM and terrorism in northern Mali, but such a military strategy is highly unlikely to bring a lasting solution to the socio-political and economic problems of the Tuareg population. Surely, France and many Western countries have had it all wrong in Mali (and the Sahel in general) for more than thirty years, and today are seeing the result. And the recent hostage-taking in Cameroon is a further indication that the scourge of terrorism in the Sahel is slowly expanding across the African continent.

European countries have recently pledged $4 billion USD to help rebuild Mali. While financial aid and assistance is deeply needed, this will not be the panacea to resolve Malians’ problems. It is a long-term political and socio-economic strategy as well as wise advisers that can bring some progress to Mali. But most important, a genuine willingness from the prime protagonists in Mali in general and Bamako in particular is essential to find a lasting solution.

Abdelkader Abderrahmane, Senior Researcher, Conflict Prevention and Risk Analysis Division (CPRA), Institute for Security Studies (ISS), Addis Ababa, Ethiopia. The views expressed here are the independent views of the author and do not represent the views of ISS.