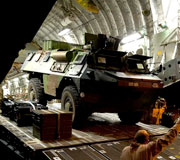 Along with the authorization of the UN Multidimensional Integrated Stabilization Mission in Mali (MINUSMA) on April 25, the UN Security Council authorized French troops to continue their military campaign in northern Mali, Opération Serval, in order to counter the threat of international terrorism emanating from the region. This is the latest indication that governments and multinational organizations such as NATO and the UN continue to believe a military presence can counter international terrorist threats. The so-called “war model” response to terrorism is familiar to global audiences, most starkly used by US President George W. Bush in his war against al-Qaeda, and is reinforced by terrorists who frequently characterize themselves as warriors and soldiers for their cause, engaged in a war against their targets.

Large-scale military responses to terrorism include campaigns in Afghanistan and Iraq, but is a military deployment the best response to a terrorist threat? Or can engaging in a war with terrorist actors be counterproductive?

There has been a recent trend among Western governments and multinational organizations away from full-scale ground deployments as a means of countering international terrorism, and governments have sometimes chosen more limited, short-term action, such as the airstrikes in Libya. But capitals are also still entrenched in extended counterterrorism campaigns that have proved costly in lives, money, and reputations.

By deploying troops in the face of a terrorist threat, governments are responding to a public desire for action against terrorist actors. Political leaders appear decisive and able to regain the upper hand, often in the aftermath of, or threat of, an attack. However, the disadvantages of responding with force are many and well documented, and the action can often hinder broader counterterrorism initiatives. Indigenous populations can feel alienated, invaded, and colonized, and civilian casualties which accompany military engagements can have a radicalizing effect on populations, causing them to sympathize and collude with terrorist groups.

From a media perspective, images of foreign troops deploying to areas of assessed terrorist activities feeds terrorist propaganda of crusades. Armed forces can also quickly lose the support of the international community or allies if their actions are perceived to be heavy handed and overzealous, as Israel has experienced with its troop presence in Gaza. Images of well-equipped, heavily armed military forces against poorly equipped and lightly protected terrorist actors can have a powerful impact, no matter how unrepresentative of the overall conflict. Terrorist organizations often thrive in the role of oppressed underdog, and pitting the technological might of a superpower force against farmers and ragtag militias wielding antique AK47s can be a public relations nightmare for countries attempting to combat terrorism.

In addition, military campaigns against terrorist groups often simply do not work. In a 2008 study of 648 terrorist groups between 1968 and 2006, S.G. Jones and M. C. Libicki found that “military force has rarely been effective in defeating this enemy. Indeed, US reliance on military force–especially conventional military forces–has often been counterproductive.” This assessment is borne not just out of the US experience, but in global attempts to use military campaigns to counter terrorism, notably Russia’s campaign against Chechnya; India’s response in Kashmir; the UK’s deployment in Northern Ireland; and coalition force campaigns in Afghanistan and Iraq. A troop presence can heighten a terrorist threat, the fear of which terrorists can work to maximize.

However, the shortcomings of military action are often because the military is misemployed. As General Rupert Smith says in his book The Utility of Force, a military solution will not solve a political problem. Properly employed military troops can, in the short term, deny a terrorist group or individual the space to operate. In the first phase of operational deployment in 2001, the US military operation in Afghanistan was successful in denying al-Qaeda freedom of movement by ousting the regime that supported them. Therefore, while long-term military campaigns against terrorist groups have been beset by problems and risk becoming an exercise in jousting at shadows, short, well-defined military missions can be effective in mitigating the threat of terrorism.

Military action has been most successful when the missions have been short, clearly defined and largely standalone, usually in response to a crisis or emergency. Examples of this can be seen in the SAS raid on the Iranian Embassy to rescue hostages in London in 1980; the Peruvian commando unit raid on the Japanese embassy in Lima in 1996 to rescue 500 hostages held by the MRTA; and the bombing raids on Libya in 1986 in response to the regime’s support for international terrorism and the bombing of a Berlin discotheque. The French Navy successfully intercepted weapons and explosives bound for the IRA on board the Eksund in 1987, and the same success can be attributed to the rescue of 90 hostages from hijacked Lufthansa Flight 181 in a joint German-UK special forces mission to counter action of the People’s Front for the Liberation of Palestine (PFLP).

The most recent example of such action is the US Special Forces’ raid on the hideout of Osama bin Laden. The operation could be regarded as part of the wider US campaign in Afghanistan, but the action more closely resembles standalone missions. In his announcement about the operation, President Obama identified the death of bin Laden as “the most significant achievement to date in our nation’s effort to defeat al-Qaeda.” It is notable that the 10-year military campaign in Afghanistan is therefore judged as less effective than the single mission on the compound. In addition, the dramatic increase in the use of drone strikes by the US to decapitate the core al-Qaeda leadership suggests that, while the ground troops are scaled back, the US is placing greater emphasis on standalone military missions.

The first phase of Opération Serval in Mali is assessed as having achieved its aims in the first ten days of deployment. It succeeded in securing Bamako, stopping the terrorist advance, striking terrorist rear bases, and setting the conditions for the arrival of African troops. They have retaken terrorist-held urban areas and pushed deep into the rural strongholds. Unsurprisingly, given the training, equipment and capabilities of the French forces, they did so rapidly and efficiently. The mission now must avoid the danger of being caught in what François Heisbourg calls “the quagmire.”

Preventing standalone missions from becoming extended campaigns is not straightforward, and once a mission has been launched, events often unfold in unexpected ways. As the well-used military truism says, “no plan survives first contact.” As far as possible, however, it is imperative to have a clear mission with objectives that are attainable by the use of armed forces and a defined exit strategy. The temptation to overreach or extend the mission once engaged is strong, and one can contrast the invasion of Iraq in 1990 with the one in 2003 to see the different strategies in action. The 1990 US-led coalition to force the Iraqi withdrawal from Kuwait had a clearly defined mission and end strategy (and was not a counterterrorism operation). In 2003, George W. Bush claimed to have the same clarity: “Our mission is clear–to disarm Iraq of weapons of mass destruction, to end Saddam Hussein’s support for terrorism, and to free the Iraqi people” but the mission was in fact not very clear, and subsequent insurgency campaign made an exit strategy complex.

Short, sharp military operations have been instrumental in damaging terrorist group leaderships, interdicting supply lines, capturing operatives, and obtaining intelligence leading to the discovery and disruption of terrorist attacks, and these activities have weakened terrorist organizations enough to bring about negotiation and ceasefires. Military operations can provide the security framework within which diplomatic and social development can occur in order to address the root causes of each terrorist group. The use of military force, it would appear, can win a battle but not a war against terrorism. The French forces in Mali should bear this in mind and keep its mission short, well defined, and avoid mission creep.

As the tactic of terrorism continues to be used by groups and individuals, counterterrorism strategies must incorporate all of the tools available. Military action will not address the root causes of terrorism in Mali or its entrenched networks and organized crime. The region is facing a multifaceted crisis of which terrorism is both a symptom and cause, and military intervention is ill equipped to address many of these challenges. However, a limited-term, clearly defined military deployment with a distinct exit strategy could create the space for political, social, and economic instability to be addressed; help restore territorial integrity; and deny terrorist actors freedom of movement. It will not remove terrorism from the country, but that should not be its mission.

Fiona Blyth is a former military intelligence officer with the British Army who is a Research Assistant in the Africa program at the International Peace Institute.