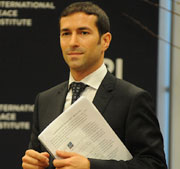 “This modern humanitarian system is evolving towards something of a global welfare system,” said Jérémie Labbé, Senior Policy Analyst in charge of IPI’s Humanitarian Affairs program, in this interview. He said the system has “growing ambitions to be on all fronts: on the front of complex emergencies and conflicts; on the front of sudden onset natural disasters like earthquakes or floods; and also on the front of situations in which the population finds themselves in chronic vulnerability, relapsing into a food crisis every second year, like in the Sahel or Somalia.”

Mr. Labbé had just returned from a conference in Nairobi organized by Médecins Sans Frontières, where participants grappled with a challenging question: is the system moving from principled humanitarianism to a more context specific, pragmatic humanitarianism?

“I think that pragmatism is indeed the order of the day,” he said. “Does it mean that we have to completely relinquish principles? Certainly not. I think that humanitarian actors have to choose whether they want to abide by a very principled form of humanitarianism that has some limitations, or if they want to take a different posture that opens some new opportunities. The key is indeed to have certain degree of flexibility or pragmatism in the action.”

Mr. Labbé also discussed the principles of humanitarian action as they are being applied in an ever-changing humanitarian landscape, such as the situation in Syria, and the tensions surrounding humanitarian aid which is viewed by some as a purely Western undertaking.

The interview was conducted by Marie O’Reilly, Associate Editor at the International Peace Institute.

Marie O’Reilly: I am here today with Jérémie Labbé, Senior Policy Analyst in charge of IPI’s Humanitarian Affairs program. Jérémie, thank you for speaking with the Global Observatory today.

You recently returned from a conference in Nairobi on the future of humanitarianism, organized by Médecins Sans Frontières. The conference focused on a key question that challenges the very foundation of the humanitarian system. It was: “Are we moving from principled humanitarianism to a more context specific, pragmatic humanitarianism?” How would you answer this question, and what were some of the ideas that arose during the conference?

Jérémie Labbé: As most of you must know, humanitarian principles are guided by humanity, impartiality of the undertaking, independence, and neutrality. What’s important to keep in mind is that all those principles are not equal. There is what we call a hierarchy within those principles. Humanity and impartiality can be considered as values, fundamental values that are guiding the humanitarian endeavor. Independence and neutrality, on the other hand, are what makes the respect of those two primary principles of humanity and impartiality possible. They’re operational principles; they’re tools that will allow access to populations, particularly in situations of conflict, and the safety of staff.

The question that was raised by MSF during this conference is that, within MSF, they have the impression that even abiding to humanitarian principles—and MSF is considered today as one of the most principled humanitarian organizations—doesn’t guarantee access to all the areas where they would like to operate. One example is Syria, where MSF is present in rebel-controlled areas. They had this feeling that what made this access possible was precisely the fact that they were not neutral there. They supported the cause of the rebels, or of the civilian population, which is to rise against an oppressive regime, and it was by saying that they had some sympathy for the cause of the rebel movement that facilitated their access to the ground.

Rather than asking “principle versus pragmatism,” we should consider being principled and pragmatic. And the idea here is that sometimes those principles are contradicting each other, and sometimes you have to privilege one principle over another.

MO: So, overall, do you think that people are a little more flexible in their approach today in the humanitarian sphere?

JL: I think that pragmatism is indeed the order of the day. Does it mean that we have to completely relinquish principles? Certainly not. I think that humanitarian actors have to choose whether they want to abide by a very principled form of humanitarianism that has some limitations, or if they want to take a different posture that opens some new opportunities. The key is indeed to have certain degree of flexibility or pragmatism in the action.

MO: In your recent report, Rethinking Humanitarianism, you depicted the start of the 21st century as a particularly challenging time for humanitarian action. On the one hand, the humanitarian system faces an increasing caseload and an expanding remit. For example, today it is often expected to address the underlying causes of conflict while also applying the “band-aid” to those worst affected.

On the other hand, the nature of the crises and conflicts that humanitarians address is changing, and gaining access to victims can be complex as host states reassert their authority. Humanitarian actors have proposed a variety of ways to adapt to this changing landscape. What ideas are out there? What are their strengths, and where do they fall short?

JL: You’re right. The humanitarian system in this early 21st century has to cope with an increasing humanitarian caseload, a changing nature of the environment in which humanitarian actors are operating—all that with finite resources and, you mentioned it, more assertive affected states who, legitimately enough, ask to set the tone of the actions of humanitarian actors within the country.

In this paper recently published by IPI, I identify a sort of conventional wisdom of the mainstream humanitarian sector that I qualify as a six-point agenda for adaptation that basically implies that in order to adapt to this changing environment, the humanitarian actors must first better anticipate risks; they must strengthen national and local capacities; they have to enlarge the donor funding base and use existing financial resources—but also in-kind resources—more effectively; they must enhance coordination, leadership, accountability, and professionalization of the sector; and they must innovate and leverage new technology.

Yet, this ambitious agenda raises a number of tensions, big and small. Some of them—for instance, the increasing trend to standardize the humanitarian sector—are creating some barriers for small actors, for those local grassroots organizations to really join this humanitarian sector because it’s becoming increasingly complex. So there is this tension between standardization of the humanitarian endeavor and reaching out to those new partners.

A lot of the problems faced by humanitarian actors in different countries is that it’s still perceived as this Western undertaking and Western interference within their own internal efforts. There is this increasing tension between humanitarian action as a short-term endeavor–you mentioned it, which is just about applying a band-aid on an open wound and make sure it doesn’t get infected afterwards–and a much longer-term endeavor that tries to address some of the root causes of this situation, some of them being chronic.

There are those tensions, but we have to remind ourselves here that humanitarian principles, as I mentioned before, were created for quite specific situations–mostly situations of conflict–and not all of them are sacrosanct principles, but independence and neutrality are operational principles that are tools for access and security.

The fact that there are different actors with different comparative advantages is a strength and should be viewed as such. Here I am thinking in particular about situations of conflict, very polarized situations like in Afghanistan, Somalia, today or even tomorrow in Mali, where you have the United Nations system that is increasingly viewed as a party to the conflict, or, at the very least, support one belligerent over the other probably legitimate one, but it’s not what matters for humanitarian actors. Humanitarian actors must access all populations, including those that are under the control of the Taliban or al-Shabaab.

The problem with this UN-led coordination system is that it creates some tensions where humanitarian actors who are participating in this coordination system are perceived as part of this higher political objective which can be to the detriment of access to the population in need.

MO: What form do you see the humanitarian system taking in the coming decades? Will it stick to its founding principles and continue to strive to remain impartial, neutral, and independent in all cases? And, also, with the rise of “nontraditional” humanitarian actors such as private military and security companies that do some sort of humanitarian work—corporations and private foundations—who will be the humanitarians in the future, in your mind?

JL: The humanitarian system, or rather I should say the humanitarian “systems” plural, have growing ambitions to be on all fronts: on the front of complex emergencies and conflicts; on the front of sudden onset natural disasters like earthquakes or floods; and also on the front of situations in which the population finds themselves in chronic vulnerability, relapsing into a food crisis every second year like in the Sahel or Somalia. Somehow, this modern humanitarian system is evolving towards something of a global welfare system. I think that those growing ambitions are certainly legitimate; they intend to address the causes of the crisis, to make sure there is no relapse into those crises.

I think, however, that pure principled humanitarian action, if I can say so, remains important, in order to have access to the population in need that falls under the control of groups like the Taliban or al-Shabaab or Islamist groups in northern Mali. Those actors that are abiding by those humanitarian principles are still very much necessary, but they might be at the margin of a broader humanitarian system that has those growing ambitions.

MO: Great, thank you very much. That was very interesting Jérémie.