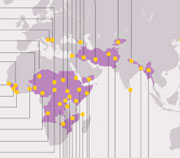 From Afghanistan to Zimbabwe, fragile states face common challenges: they host less than one-fifth of the world’s population yet are home to one-third of the world’s poor; they are more vulnerable to external and internal shocks—including armed violence—than other countries; and, in contrast to other developing countries who have managed significant progress towards the MDGs, not one of these countries has achieved a single Millennium Development Goal. They constitute most of the MDG deficit: seven in ten infant deaths and six in ten undernourished people are found in fragile states. Struggling to meet the challenges of basic survival, poverty-stricken populations in fragile situations are less equipped to deal with volatile changes, whether political, environmental, or economic. Behind these symptoms of fragility lays a limited state ability to develop mutually constructive relations with society and to carry out basic governance functions.

But, paraphrasing Tolstoy’s line, “Every unhappy family is unhappy in its own way,” all fragile states are fragile in their own way. The 47 countries and economies used for quantitative analysis in the 2013 OECD report on fragile states constitute a diverse group, adding to the challenge of effective engagement and significant development impact. Some of them–including Angola, Nigeria, Ethiopia, Chad, Mozambique and Rwanda–have been among the fastest-growing countries of the past decade, whereas over the same period, in contrast, countries like Sudan, Chad, Eritrea, and Zimbabwe lost economic ground.

Some are endowed with an abundance of natural resources, thereby benefitting from recent rises in commodity price: one in six fragile states depend on minerals or fuel for over 75% of their exports. Most are taking measures to mitigate the negative impact of natural resource abundance on the economy and institutions, but the jury is still out on whether these will lead to development windfalls. With taxes, for example, oil-rich countries are often able to levy significant taxes, but their tax effort–the ratio of the actual to potential tax revenue–remains low (such as in Chad, Angola, Nigeria, Sudan and the Republic of Congo), whereas small low-income countries are managing strong levels of tax effort, such as in Liberia and Cape Verde.

Finally, eleven fragile states have graduated from low- to middle-income status since 2001: Angola, Cameroon, Cote d’Ivoire, Georgia, Nigeria, Pakistan, Republic of Congo, the Solomon Islands, Sudan, Timor-Leste, and Yemen. Except for Timor-Leste and small-island states, middle-income countries are usually not very aid dependent (aid-to-GDP ratios below 3%) and require different modes of engagement from low-income, aid-dependent countries such as Liberia (ODA-to-GDP ratio of 70% over 2000-2010).

Shifts in the Fragility Landscape
Further, the distinctiveness and diversity of fragile states must be assessed and addressed in light of shifts that are reshaping the fragility landscape. A first set of shifts includes the implications of the previously-mentioned fact that about half are middle-income fragile states (MIFS), creating new opportunities and challenges, notably with respect to development finance and poverty reduction.

The graduation to middle-income status of demographic giants such as Nigeria has contributed to the observed near 20-fold increase in the share of the global poor found in MIFSs, from below 1% in 2005 to about 17% in 2010. Certainly, MIFSs have access to a larger array of private resource flows and may be more able to attract diaspora bonds, but it may also mean that they will receive less attention from donors. New donors have also emerged—chief of which is China of course, and, increasingly, India—that are particularly active in resource-rich African countries (many of which are fragile states) through specific engagement methods, including the more focused package of trade, aid, and investment than traditional DAC donors. Other noteworthy positive shifts include a reduction in the prevalence of poverty in several fragile states in recent years along with fruitful efforts to increase additional domestic revenues. 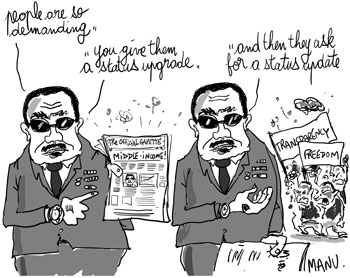 But perhaps the most fundamental shift is a conceptual one, and has to do with how state fragility is understood, how and why it is considered to “matter,” and consequently what can be done about it. State fragility had long been analyzed in terms of a government’s willingness and capacity to undertake some basic functions. Indicators assessing the soundness of policies and quality of institutions—chief of which is the World Bank CPIA—were then considered as not just useful proxies, which they remain, but as true measures of the crux of the issue. However, over the years, this “thin” (relatively narrow), conceptualization of state fragility (and governance) centered on considerations of efficiency and conformity has given way to a broader, “thicker” approach, which places the social contract between the state and the citizenry, the resulting legitimacy of the ruling leaders, and ultimately the country’s ability to withstand shocks—its resilience—at its center.

This conceptual shift matters because policies and priorities to address fragility will differ whether they are based on a “thick” or “thin” conceptualization of state fragility, while having an inaccurate conceptualization may imply missing genuine cases of fragility. The Arab Spring is striking evidence of the limitations of the “thin” approach: among Arab Spring countries, only Yemen was rated “alert” (FSI score above 90) by the Failed State Index (FSI) in 2010 and 2011. This is not meant to infer that all Arab Spring countries ought to have been labeled fragile in the years leading up to the popular uprisings, but the fact that governments praised for the quality of their policies and institutions—Tunisia for example had an FSI score equal to Brazil’s in 2010—were overthrown by predominantly young and frustrated crowds reinforces the notion that state fragility arises when the state is unable to meet or manage citizens’ expectations.

As such, the peacebuilding and statebuilding goals embedded in The 2011 New Deal for Engagement in Fragile States, which commits fragile states and international partners to 1) “do things differently” and 2) focus on “different things” reflects a welcome shift towards a “thick” conceptualization of state fragility which looks beyond the quality of government policies and institutions to consider the multiple dimensions of state-society relations.

Current and Future Shake-ups
These shades and shifts mirror in part the influence of powerful megatrends that have shaken up the fragile-states landscape—and will continue to do so. One is the technological revolution, and primarily the near-ubiquitous spread and fast growth of mobile-phone penetration (which also drives connectivity to the Internet). Cellphones are closing the digital divide faster than anticipated, and their largely-positive effect on the lives of hundreds of millions of individuals in some of the poorest, unstable countries on Earth has been largely documented. Cellphones do not only serve to make calls or payments; they are fundamentally empowering devices that foster information, communication, and collective action—for the better, in the majority of cases. In any event, they will continue to alter the balance of power, shape expectations, incentives and modes of engagement in ways that speak directly to state fragility understood as a “thick” concept. 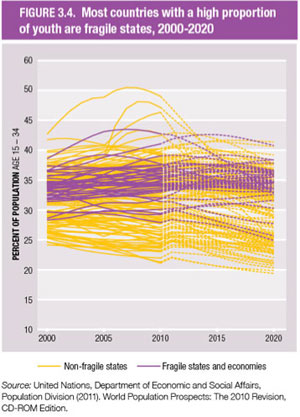 Demographic trends are other shake–up factors. The 15-34 age group already makes up more than one-third of the population in most fragile states. Between 2005 and 2010, the average total fertility rate for the top 20 countries on the 2011 Fragile States Index was almost twice as high as the average for all developing countries, and of these countries, Iraq, Niger, and Yemen have the highest population growth rates. There is no set pattern as to how relatively fast rising populations and “youth bulges” impact development and political processes, but issues of employment and participation of these young, better-informed cohorts are deemed to be increasingly acute in most fragile states.

Lastly, climate change and environmental degradation will continue to affect fragile states more directly and severely than other countries, as they tend to be more exposed and least able to mitigate and cope with desertification, droughts, changing rainfall patterns etc., and are also often net importers of food. While the notion of “resource wars” is as contested—or complex—as that of the “youth bulge,” it is clear that climate change will make the quest for food, water, and land an increasingly salient issue in fragile states.

These shades, shifts, and shake-ups of the new fragile states landscape present significant challenges, but also present real opportunities provided their implications are fully understood, and that this understanding can affect policymaking.

This article summarizes the main findings and arguments presented in the recent OECD report Fragile states 2013: Resource flows and trends in a shifting world, by its co-authors.