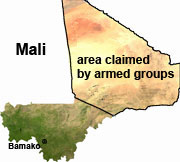 As armed groups strengthen their hold over northern Mali, the UN Security Council is set on September 17 to weigh a plan by the Economic Community of West African States (ECOWAS) to support a Malian government offensive in the north. While the details of the plan remain unclear, Mali’s interim President Dioncounda Traoré has requested assistance from both ECOWAS and the UN in reforming and training the country’s army, as well as logistical assistance in a government offensive that could include ECOWAS troops to secure cities in the north. Army officers and politicians close to the leaders of the March 22 military coup have been openly critical towards the plan, particularly of the latter component.

Key Conclusions
A purely negotiated solution to the conflict in northern Mali is unrealistic; any strategy to address the conflict will need to include a military component. But the ECOWAS approach harbors major risks. The international community–which would have to back any ECOWAS mission in Mali financially and logistically–should focus its efforts on supporting the re-establishment of an effective Malian government and army. These efforts could suffer a serious setback as a result of the current ECOWAS plan, which is fuelling political tensions in the capital Bamako.

Secondly, ECOWAS is not the right regional framework to coordinate a response to the conflict in northern Mali. Neither Algeria nor Mauritania is a member of the bloc, and both are opposed to its approach. At the regional level, the key challenge is how to integrate Algeria into an international strategy to tackle the conflict.

Analysis
The current drive towards external military intervention is partly based on the assumption that northern Mali has fallen victim to external actors and dynamics outside its control. The conflict erupted, the story goes, when Tuareg fighters returned from Libya with heavy weapons and worsened when al-Qaeda in the Islamic Maghreb (AQIM) emerged as a key force, drawing on militants from across the region.

However, although AQIM does play a central role, the majority of actors in the conflict are local. Tensions had already been on the rise in northern Mali throughout 2010 and 2011, opposing northern allies of the Malian leadership, who in some cases were deeply involved in criminal activities with groups that were excluded from the alliances built by the former President Amadou Toumani Touré (ATT). In the final years of ATT’s rule, both organized crime and AQIM were able to establish themselves in northern Mali, essentially because of widespread complicity between the Malian leadership and security apparatus on the one hand, and criminal and extremist groups on the other hand. Key northern allies of ATT benefited from smuggling and kidnapping-for-ransom, and this created both tensions and vested interests in northern Mali that are now at the heart of the current conflict. Western governments contributed to this development by paying ransoms to AQIM and its intermediaries.

The radical Islamist element is new to the current conflict, compared to previous ones in northern Mali. But while some in the armed groups genuinely hold Salafi convictions, we need to look underneath the Islamist façade in order to understand who the armed groups in Mali’s north are, and what they want. Media coverage often portrays two of the main northern groups in ideological terms: the National Movement for the Liberation of Azawad (MNLA) as a secular separatist movement, and Ansar Dine as a Salafi movement opposed to northern separatism.

But the rift between the MNLA and Ansar Dine is not primarily one of ideology. Rather, it is the same rift that opposed notables of different Tuareg tribes during the conflicts of the 1990s and 2006-09. The leadership of Ansar Dine represents part of the tribal establishment of the Ifoghas Tuareg. Many of Ansar Dine’s leading figures are pragmatists rather than ideologues, who have been pursuing their quest for power in various guises for the past decades. The Movement for Tawhid and Jihad in West Africa (MUJAO) is not only an offshoot of AQIM; it is also partly run by drug traffickers who had been allied to the former Malian leadership. The same applies to the Arab militia in the Timbuktu region calling itself the Arab Movement for Azawad (MAA).

Negotiation or Conflict?
The current situation is characterized by a set of tactical alliances–most importantly, the alliances with AQIM through which Ansar Dine and MUJAO seek to strengthen their control of cities and territory. For both, the goal is to establish themselves as key players in eventual negotiations over power-sharing with the Malian government. Leading notables and businessmen in the north have started backing the two groups in order to safeguard their interests and be on the winning side.

These tactical alliances are unlikely to last. As soon as the government in Bamako is again able to exert military pressure, provide incentives for northern groups to switch sides, and open serious negotiations, alignments in the north will change. The MNLA is already signaling that it may abandon its separatist agenda, and is trying to sell itself to the outside world as a counter-weight to the Islamist forces. But it has lost much of its military power, and therefore its bargaining position in negotiations is weak.

The current situation, however, is not conducive to serious negotiations. Besides the continued disarray of the Bamako government, the armed groups in the north are in far too strong a position to compromise. Negotiations that would accommodate the main armed groups will do little to resolve the conflict since there are genuine grievances over governance that need to be addressed, and dialogue over these grievances needs to take place with society in the north at large, not only the armed groups. As long as the armed groups are not exposed to military pressure, and as long as their constituent elements have no incentive to revert to the Malian state, they will block any meaningful negotiations by making unworkable demands.

The key to the situation lies in Bamako–that is, in an effective government in Bamako that can both exert military pressure by deploying its troops, and win some northern groups back over to the government side. In any scenario, however, such efforts will have serious humanitarian implications. Once the government in Bamako begins to act, conflict in the north will escalate. To date, there has been very little fighting since government forces fled the north–for the most part, armed groups simply carved up the territory.

But once some factions move over to the government, inter-factional conflict will erupt. With this comes a serious risk of inter-communal fighting. The various armed groups, as well as the militias recruited from northern communities that are mobilizing in the south, are all based on different ethnic and tribal groups. There is a bitter legacy of conflict between these groups during the 1990s, as well as more recently. A government offensive could therefore be followed–and its success could be endangered–by major inter-communal conflict in the north.

The government in Bamako could contain these risks, provided it works closely together with northern communities. This presupposes that the persistent deadlock between the established political class and the coup leaders is overcome, and the government is able to pursue a clear political strategy in the north. It also requires that the army undergo a major overhaul to tighten control over its units and proxies, and prevent revenge acts and abuses during a northern campaign. International support should focus on these goals. A premature northern offensive, begun before a major restructuring of the army, would be counterproductive. The idea that ECOWAS troops can provide a shortcut to such an offensive is flawed.

Support to the restructuring and training of the Malian army should be conditioned on the re-establishment of government control over the army. Whether ECOWAS is the right framework to provide such assistance, however, merits closer reflection: the bloc’s more professional armies are from Anglophone countries, while many of its Francophone members feature armies that have recently integrated militias, or have repeatedly carried out coup d’états.

In addition, plans for a large presence of ECOWAS troops are currently fuelling political tensions in Bamako, thereby setting back efforts to overcome the deadlock. Traoré’s request delineates a much narrower mission for ECOWAS troops than the bloc’s initial plan for a deployment of 3,300 troops, whose mandate would have included securing government institutions in Bamako. This represented a thinly-veiled attempt to sideline the coup leaders by force, and–unsurprisingly–was not accepted in Bamako. The current request explicitly excludes ECOWAS combat troops, but the former junta continues to oppose plans for a large presence of foreign troops.

The Regional Dimension
The ECOWAS plans are even more problematic in view of regional relations. In the years before the conflict erupted, the lack of regional military and security cooperation allowed the situation in northern Mali to steadily deteriorate. The main reason was the inaction of the former Malian leadership against organized crime and AQIM, which caused tensions with Mauritania and Algeria–the two most influential regional actors in northern Mali. ATT’s fall has opened up an opportunity to put regional relations on a new footing. But clearly, ECOWAS is not the right framework to do so. Neither Algeria nor Mauritania is a member of ECOWAS; they are both opposed to military intervention by the bloc; and they also resent the mediating role of the Burkinabé President Blaise Compaoré in northern Mali.

In the face of ECOWAS activism, Algeria has taken an isolationist stance, insisting on a purely negotiated solution in northern Mali, and refusing to take a leading role to forge a regional approach. At the regional level, the key challenge today is how to integrate Algeria into an international strategy to tackle the conflict. Pushing for ECOWAS intervention without Algerian backing would run exactly counter to this objective. An ECOWAS intervention without clear backing from Algeria could lead to a scenario where the region’s states overtly or covertly support opposite sides of the conflict–which would render a bad situation much worse.

The Burkinabé president’s attempts at mediation are equally problematic, and raise the risk that competing initiatives to mediate could emerge. In order to be effective, regional efforts to coordinate a response to the conflict need to move to a different level. One possibility could be the pays du champ–an Algerian-led grouping including Mauritania, Mali and Niger that has, admittedly, to date failed to translate into tangible cooperation. More plausibly, the African Union could provide an adequate framework to regroup the relevant actors.

Wolfram Lacher is a researcher at the German Institute International and Security Affairs (Stiftung Wissenschaft und Politik) in Berlin. His research focuses on Libya and security issues in the Sahara-Sahel region.