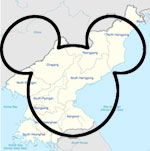 Ever since the celebrated mouse and some of his colleagues went on show for Kim Jong-un during a performance in Pyongyang, North Korea, watchers and pundits everywhere have been opining on what this means for the country, its people, and the stability of the region in general. The news seemed to come on a welcome summer wind, in contrast to the usual chilling reports of nuclear tests and maritime skirmishes that we have become accustomed to.

General consensus, while cautious, seems to be that Mickey Mouse bodes well for hopes of reform in North Korea. The fact that copyright was not obtained from the Walt Disney Company did little to dampen the excitement generated that, against all odds, these distinctly western creatures showed up in the heart of the hermit kingdom. Nonetheless, it may be wise to maintain a more level-headed approach, and attempt to contextualize recent events within broader trends in the country and the region in general.

It would seem that despite the new leader’s softer posture, significant reforms in the economy and governance of the country are unlikely to occur any time soon. There are, however, increasing numbers of observers, especially in Asia, that see signs of change, but on a more distant horizon, and of a very different nature.

In particular, they note an increased reliance of the regime on special economic zones and administrative regions, where the elite trade the country’s mineral and labor resources for foreign currency.  This development allows the authorities to generate enough income so that they may continue avoiding any structural reforms in the short and medium term. Political and economic reforms are seen, in North Korea, as potentially compromising to the regime’s grip on power.

Yet putting off reforms, or rather, limiting them to the easily contained special economic zones, may be a double-edged sword.  Some see a tipping point in the not too distant future, where the influence gained by foreign powers involved in these zones outweighs the regime’s insistence on keeping the rest of the country closed down. Countries in the region will scramble to invest and set up operations in North Korea as opportunities of an economic as well as a strategic nature arise. Only at this point will the reform momentum be sufficient to give substance to the performance put on by our Disney friends some weeks ago in Pyongyang.

News of North Korea’s possible warming up to western iconography came in tandem with other reports of shorter hemlines and mystery romances. It turns out that a young woman seen beside the supreme leader is his wife. Western media highlighted her former career as a cheerleader.  Can it be that the DPRK’s famed propaganda machine has finally succeeded in penetrating the American psyche? The South Korean National Intelligence Service (NIS) believes that the couple has begun appearing in public in order to project a more stable image of the new leader, for both domestic consumption and the outside world.  Marriage, it would seem, is an international sign of maturity, and in this case is designed to lend credibility to Kim Jong-un’s future role in managing the nuclear stand-off with the US.

Analysts see all this as part of a general pattern in which Kim Jong-un is being presented internally as a re-embodiment of his grandfather–arguably more of a people’s man than his father, and still the most popular of the Kim dynasty–and viewed externally as a more open and engaging individual. Yet, beyond the fresh branding, there are some worrying signs on the ground. Reports from the inside point to tighter border controls with China and increased efforts to stem the flow of foreign news into the country.

Perhaps even more worryingly, though, is the development and deepening of what has been termed a “rent economy.” This refers to an arrangement in which the governing elites hand out rights to mineral and labor resources to foreign firms in exchange for much needed foreign currency. That currency, in turn, pays for the loyalty of a core section of the bureaucracy, military, and party apparatus. The North Korean won fetches little by way of German sedans and Scottish whiskey, both needed to ensure the system’s allegiance to what is now the third generation of those “heroic” guerilla bands that allegedly routed out the Japanese in the 1930’s.

Beyond the stageplay, attention should focus on whether the new leadership has any intention of reforming this economic system, which has arguably done the country little good. Stephanie Kleine-Ahlbrandt of the International Crisis Group (ICG) wrote in a Global Observatory piece that the authorities in North Korea are still afraid that any Chinese-style economic reform and growth would bring about an East German-style collapse. This fear has pushed them to opt for the safer alternative of cutting the country up into special economic zones like Rason (which boasts a five star Chinese resort and casino) and special administrative regions like Kaesong (where South Korean firms employ thousands of workers). At this pace, North Korea will soon look something like a slice of Swiss cheese, with its characteristic holes representing, ironically, the few places where it actually does engage with the international community.

But history happens unexpectedly. There may come a time when the importance of the economic zones outweighs the totalitarian grip of the regime and a tipping point is achieved. While there are indeed low prospects for structural reforms under present circumstances, some have taken a more long-term view. An increasing number of commentators, especially in East Asian countries, are pointing out that capitalism in Asia is learned in special economic zones. This was, after all, the path taken by China and other countries in the past. Newspapers in South Korea are reporting an influx of businessmen from the north in China, purportedly to learn how to manage these zones. They also point out that their operation is increasingly being placed in the hands of the cabinet, as opposed to the military.

Perhaps more importantly, those commentators are pointing out that no country in the region can afford not to invest in one or the other of these special zones, as that would grant too much influence to those that do invest. We may therefore expect to see major players in the region increase their stake in these ventures, finding ways around the economic sanctions. It may turn out that what the regime does today to avoid reforms actually paves the way for them, with or without the Mickey Mouse stageplay.