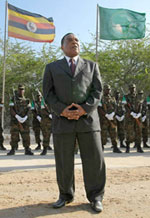 The transfer of UN Special Representative Augustine Mahiga’s office from Nairobi to Mogadishu on January 24, and the upcoming international conference on Somalia in London on February 23 underscore the renewed commitment of the international community to the achievement of a more stable and viable Somalia. There is widespread recognition that a more broadly acceptable government in Mogadishu with greater opportunities for regional participation is essential for sustainable peace.

Underneath these two important initiatives is the continued concern of the international community to deal with the terrorist threat posed by al-Shabaab and the criminal network of Somali piracy, which continues to operate in the shipping lanes of the Indian Ocean between Aden and Somalia.

The transfer of the office of the Special Representative following the visit of Secretary General Ban Ki-moon to Mogadishu in late December—the first such high-level visit in twenty years—is both operational and symbolic. The move expresses the UN’s strong commitment to ending the transitional phase of governance this coming August with a more responsible and empowered government based on the Garowe principles (adopted at a hastily-convened national consultative conference in Puntland in late December 2011).

The UN is seeking to persuade the Somali president, prime minister, and speaker to overcome their internal squabbles, and at the same time to draw the regional governors in Somaliland, Puntland and the South into a more decentralized government structure. In a bold move, Ambassador Mahiga and his staff are visibly present in Mogadishu, occupying offices in a compound adjacent to the airport and to AMISOM force headquarters.

The United Kingdom is in the lead of the international effort in support of the United Nations role in Somalia. The UK has just appointed Matt Baugh, a career diplomat, as its ambassador to Somalia (albeit still resident in Nairobi) and has plans to re-open an embassy in Mogadishu later this year.

The main focus now is on planning for the large international conference in London on February 23, hosted by Prime Minister David Cameron. Secretary-General Ban Ki-Moon and Ambassador Mahiga, leaders of the Transitional Federal Government, Presidents Meles Zenawi (Ethiopia) and Museveni (Uganda), and a number of African Union, IGAD officials, and provincial governors are expected to attend. The objective of the gathering is to seek broad agreement on the primary United Nations goals, especially improved governance and economic development, stronger support for AMISOM, and united military action against al-Shabaab.

A second major focus is on improving the relationship between Somalia and Somaliland. Representatives of the two are finally beginning to speak to each other, and Somaliland will attend the London conference. However, there is a long way to go to re-establishing a meaningful dialogue between the two states. Somalia, as well as the entire African Union, will not recognize Somaliland as an independent state. In turn, Somaliland will remain reluctant to draw closer to Somalia absent considerable devolution of power to regional leaders, and significant power sharing between the capital and the regional governments. In Mogadishu, there is not as yet a realization of what decentralized government will really mean.

A third major focus of the London conference is likely to be international action against piracy, both offshore and inland. Analysts have recognized that Somali piracy is actually part of a transnational organized criminal network. The pirates at sea are only one part of a larger criminal enterprise encompassing other east African countries and parts of Europe. The remarkable rescue by US Navy Seals of two American and Danish humanitarian aid workers–using technological imagery to pinpoint the pirates’ whereabouts and accomplish a surprise nighttime helicopter landing–underscores the reach of American counterterrorism efforts. It also underscores, however, the considerable limitations of the Somali government and of AMISOM, fully occupied in dealing with al-Shabaab in the south. The re-hatting of Kenyan forces as part of AMISOM, and their engagement against the terrorists in the border region, attests to the complexity of the situation.

In sum, Somalia will remain high on the international agenda over the next half year. This may well be the high water mark of international engagement–attributable in large measure to the UN and the British government. But the UN and concerned governments also have a realistic appreciation of the fragility of the Somali state. In the view of this writer, it is up to the Somali leaders and people to decide whether these latest efforts will finally bring meaningful change for the better, or turn out to be only another chapter in the history of Somali state collapse.

Ambsassador John Hirsch, Senior Adviser at IPI, has served as United States Ambassador to the Republic of Sierra Leone, and had many other assignments in Africa, including Somalia.