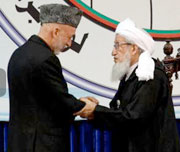 This article is part of a series examining the challenges of ending the conflict in Afghanistan. Previous articles were on the Bonn II Conference, Taliban Inclusion, and the role of Pakistan.

The Bonn II Conference on Afghanistan reviewed progress in the country since 2001, and promised international engagement after the withdrawal of most NATO military forces in 2014. Hoped-for progress on a peace and reconciliation process between the Karzai government and the Taliban did not occur. The current security, political and economic environment presents significant challenges to ending the conflict, yet Afghanistan and the international community have opportunities for taking steps forward in 2012.

Potential for a political resolution to the conflict, starting with creating a supportive atmosphere, is tied to progress in four main areas:

Progress in these areas is essential for a resolution to the conflict and while major, immediate breakthroughs are likely to be elusive, substantive steps forward are possible in 2012.

Creating an atmosphere that fosters multilayered progress toward ending the conflict is possible in 2012. Moving towards a resolution involves dialogue and action at the local, national, regional and international levels. Seeds for a peace narrative may be found in four areas:

Principles supporting a peace and reconciliation process (see article 2) established at Bonn II open the way for a dialogue with the Taliban. The Afghans themselves, the Karzai government, the politicians, other community and religious leaders need to make such a process a reality. The Loya Jirga, a traditional council organized by Karzai and held in November, provided a new foundation for moving forward after the assassination of former President Rabbani.

In 2012, the Afghan government faces difficult decisions on leadership, timing, location and desired outcomes for the dialogue. The Taliban and its various factions and allies also have to demonstrate the political will to stop the violence, break all ties with Al Qaeda, respect the constitution, and come forward to participate as one of many voices in a dialogue regarding Afghanistan’s future. The Taliban may want to play by its own idiosyncratic rules, but any credible process will require that the Taliban be willing to compromise their purist, exclusionary vision of an Islamic emirate of Afghanistan. Critically important will be the role of Afghanistan’s neighbors—governments which regularly position themselves as powerbrokers in this potential dialogue. As stated in the Bonn II Conference conclusions, ‘the region must respect and support the peace process and its outcome.”

Implementing the regional confidence building measures outlined in Istanbul in November, an extensive and challenging list requires good faith efforts by the government of Afghanistan and its neighbors. Regional competition played out in Afghanistan has historically resisted resolution. Currently, power struggles in Pakistan, Iran, and other domestic political and economic challenges in regional countries hinder serious confidence building measures.

The role of the US/NATO forces on the ground also weighs heavily on this process, as the regional players fear a permanent US military presence and/or that the US forces will be used against them. Furthermore, recent border incidents involving the US and NATO forces (the killing of the Pakistani soldiers by NATO forces and the drone shot down in Iran) are problematic. Mechanisms such as US, Pakistan and Afghanistan military consultations and the dialogue on counternarcotics among UNODC, Afghanistan, Iran and Pakistan are confidence builders. Similarly, the Afghanistan-Pakistan Transit Trade Agreement offers opportunity for regional cooperation. Other multi-party efforts would further substantive progress.

Both a peace and reconciliation process and the regional confidence building measures may require some rebalancing of soft and hard power by the US and NATO/ISAF Forces.

The Kabul Process or Afghanization requires that capable Afghans set aside self-interest and take the politically risky decisions across the whole range of security, governance, justice and economic issues. These same capable Afghans need to undercut and undo the pervasive layers of corruption. Work at improving governance at the provincial and local levels is also required to support an atmosphere for local, national, regional and international dialogue toward ending the conflict. The international community’s insistence on accountability and transparency in the Kabul Process requires Afghanistan to meet very high standards of performance. The conclusion of an IMF agreement is one example of progress. Further progress by the Afghans, some of which may need to be judged “good enough,” could change the negative dynamics between Afghanistan and the international community and foster much needed positive momentum.

Despite commitments at Bonn II of continued strong support by the international community, perceptions in Afghanistan and the region remain that the international community will abandon the country. The World Bank recently estimated that in the next decade, Afghanistan will need up to a third of gross national income in non-security development funding, three times the average which goes to other low-income countries. War-weariness after ten years of engagement without an outright victory, and austerity measures and public spending cuts in many donor countries given the poor economic situation, are interpreted as the beginning of the end of support for Afghanistan.

These perceptions are influencing Afghan and regional government behaviors. Actions by the international community that show both staying power and respect for Afghan decision-making can dent some of these perceptions, but the frayed and tense relations between the Afghan government and the international community, as demonstrated in the recent spat over a location for a Taliban office, make any progress in this area extremely difficult. The NATO summit in Chicago in late May, when NATO’s partnership with Afghanistan in on the agenda and the Tokyo Ministerial in July when the donors reconvene are two events to watch for what progress is being made, but what happens behind the scenes in negotiations and actions between Afghanistan and the international community related to dialogue with the Taliban, regional relations and Afghan governance are probably more important for creating a supportive atmosphere for ending the conflict.

A secure and meaningful framework for peace is not in sight on the diplomatic agenda in 2012. Steps toward fostering a peace narrative will take meaningful discussions on the margins of the year long series of high level Afghan-focused international conferences and summits. It will take dialogue and action in Kabul, in the Afghan provinces and along and across Afghan borders among Afghans and between Afghanistan and its neighbors. Rebalancing hard and soft power to foster a much-desired and illusive framework for peace will also likely be required. The choices to be made by Karzai and his government, among the Taliban, by regional governments, particularly Pakistan and Iran, and in the west will determine whether the opportunities in 2012 are seized for steps forward or lost in routinized rounds of meetings and the ongoing violence on the ground.

Ambassador Maureen Quinn had a distinguished career in the US State Department, including serving as Coordinator for Afghanistan; Acting Chief of Mission in Kabul; and Ambassador to Qatar.

About the photo: President Hamid Karzai at a meeting with Loya Jirga participants in Kabul, November 2011. Photo Credit: Office of the President of Afghanistan