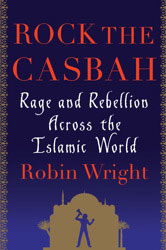 Still so recent and raw, and nowhere close to being finished, the Arab Awakening has so far produced few in-depth, holistic accounts of what has happened and why. Robin Wright’s new book, Rock the Casbah: Rage and Rebellion Across the Islamic World, chronicles the Arab Spring from a “scent of jasmine” in Tunisia to the days of rage that followed across the Middle East.

Wright explains this seemingly spontaneous eruption of revolt against geriatric dictators in the context of a broader, quiet revolution against radicalism that was already underway in the decade following 9/11. She explores this activism against violent extremism—calling it the counter-jihad—alongside better-known stories of protests against political regimes in the likes of Tahrir Square. Her sketches of rappers, poets, and comedians who criticize Islamic extremists and secular dictators alike provide a refreshing lens through which to view current events.

According to Wright, the counter-jihad movement is largely taking place within an Islamic framework, while also seeking to modernize and reform the Muslim world.  This is the common thread that ties the individual stories of cultural activism together.

While creating this overarching narrative, some of the complexities of the current situation get lost—from the role of historical attempts to reform and modernize Islam and Middle Eastern political regimes long before 9/11 to the multiplicity of present-day actors who are not represented by those Wright interviewed.

But, whether or not we can expect any clear-cut story to wholly reflect realities on the ground amid so much continuing uncertainty, Wright ably satisfies current cravings for a coherent explanation, drawing on decades of reporting from the region and bringing individual acts of courage and determination to life.