A projection about the COP26 UN Climate Summit is seen on a clock tower in Glasgow, Scotland, Saturday, Nov. 6, 2021. (AP Photo/Alberto Pezzali)

Last week, leaders of the twenty richest economies gathered in Rome, threw some coins in the Trevi fountain, and agreed to pursue “meaningful and effective actions” to combat global warming. As the host of the COP26 climate talks in Glasgow, Boris Johnson pointed out that these promises (presumably his own too) were “starting to sound hollow” in the absence of action. In fact, global leaders have begun to sound more and more like classic addicts, making long-term promises about quitting cold turkey while still clinging to their daily fix of oil. The United States, China, and Russia have pointed to 2060 as the year for reaching carbon neutrality, while India announced 2070 as its date. None of these leaders will be alive when these dates roll around, and few of them will be in office long enough to see any of their promises kept or broken. In fact, all of them face strong domestic pressure from their gas-addicted economies (and extraordinary lobbying efforts from the fossil fuel industry at COP26 itself) to stall as much as possible. As a result, our future is headed toward more foot-dragging, continued underfunding of the already paltry sums allocated to combatting climate change, and a catastrophic global trajectory headed much more toward 3.5 than 1.5 degrees.

Faced with the possibility of another COP flop, it can be difficult to see a way forward. Worse, even ideas like carbon offsets that may have seemed like a panacea a few years ago are increasingly viewed as an elaborate con that will greenwash our continued addiction to fossil fuels. Here the United Nations (UN), an organization with few teeth when it comes to tangibly shifting the behavior of powerful states, seems like an odd place to look. But now may be a counterintuitively good time to turn to our multilateral system for some of the answers. In fact, Secretary-General Guterres’ recent Our Common Agenda initiative offers us three pathways that could help us wean ourselves from fossil fuels.

The Common Agenda report points to a “glaring blind spot” in how we measure prosperity and progress. The use of Gross Domestic Product (GDP) as a hegemonic proxy for all forms of development not only fails to capture a much broader range of human wellbeing, but clearly overlooks the ways human activity destroys the environment. In fact, GDP often distorts the picture, perversely rising as a result of activities like overfishing, deforestation, and charcoal burning.

By calling for a “fundamental shift” towards other measures of growth, Guterres is not only echoing earlier demands in the Sustainable Development Goals (SDGs), he is opening the door to a transformation that could be led within the UN. If the UN refused to acknowledge standalone measures of GDP as indicators for development and progress, but instead insisted upon a multivariable measurement that included environmental damage, a great deal could change. The UN is often the global source of statistics on vulnerability, fragility, poverty, and inequality, used by many of the world’s largest economies as a reference for where they will spend their money. If the UN system shifted away from a GDP-centric approach to growth, it could have a ripple effect, forcing donors to recalibrate their measurements of success, compelling countries to change how they report on the SDGs, and ultimately changing how we speak of development globally. At its most ambitious, this proposal could lead in the direction of an economics of biodiversity, doughnut economics, and a more circular economy approach to measuring growth.

COP26 is dominated by “stale, pale males,” men over sixty who roam the corridors of power while the young, predominantly female, activists demonstrate outside. These are men whose wealth is a direct product of our carbon addiction, whose political horizons are measured out in four-year spoonfuls, and whose lifespans will never extend to cover the promises they make at COP26, 27, or 28. These men have repeatedly shown themselves incapable of passing the existential “marshmallow test” of climate change: they will always choose the marshmallow in their hand because they will be out of power before the second half of the test materializes.

Here, Guterres’ Common Agenda recognizes that a similar problem exists across the multilateral system: young people and future generations have no representation. Like the young people demonstrating in Glasgow, the generations who will feel the brunt of climate change have at best superficial entry points into UN decision-making—fairly tokenistic moments to offer their views—and certainly no legal standing to assert their increasingly urgent claims. And the 10.9 billion people expected to be born later this century—mostly in Africa and Asia—are completely excluded.

If the Common Agenda report is taken seriously, that could all change (maybe even fairly quickly). The secretary-general will soon appoint a UN Special Envoy for Future Generations, tasked with ensuring that the UN system represents those who will be born over the coming century. Driven by the Common Agenda, the UN is also investing in a “Futures Laboratory,” a data-driven capacity that could eventually be used to demand that any UN-supported programming be conditioned on long-term existential risks. And Guterres has called for a process to represent future generations in global decision-making.

If this sounds too abstract, imagine if all UN bodies tasked with measuring growth, sustainable development, and progress shifted the goalposts next year, demanding that every project and expenditure took into account the risks posed to generations born 50 years from now. Imagine a discount rate applied to any claims of progress, offsetting any benefits today by the costs to future generations. That is what taking intergenerational equity into account could look like, and it could cause big ripple effects in global spending, particularly in terms of carbon footprints. It could even lead to more transformational outcomes: Could international law provide standing for claims on behalf of the environment and future generations, or a treaty codifying their rights under international law (we already have the language here)?

The term “global public good” (GPG) may make readers hit the snooze button, but it is actually where we could see a major transformation on climate. In broad terms, a GPG is something that affects all of humanity, but cannot be managed or regulated by a single state—think civil aviation, for example. But as the COVID-19 pandemic brought home in deadly terms, the list of GPGs (or global public risks) should also include global public health. And the Common Agenda suggests the list should be much longer, potentially including the global economy, a healthy planet, digital technology, and even peace. 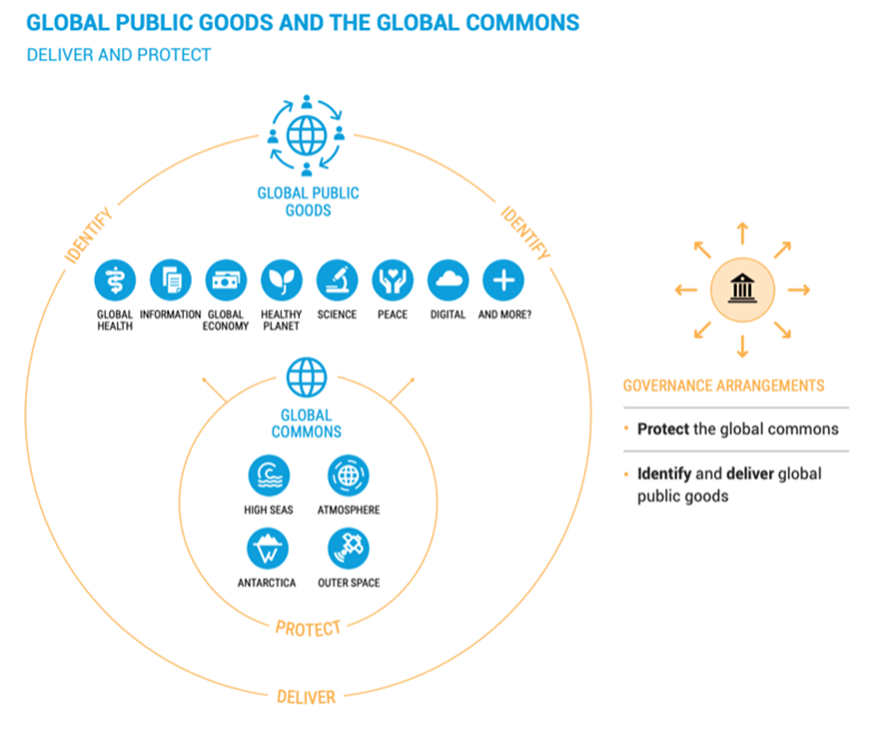 From Our Common Agenda, Report of the UN Secretary-General, 2021.

What might this mean? The Common Agenda acknowledges that we do not know for sure, but Guterres is establishing a High-Level Advisory Board to help unpack the possibilities. Over the coming period, this board will help to identify GPGs and suggest ways of governing and protecting them. Certainly, the environment will be one of the top items on the Advisory Board’s list. And I imagine the recommendations will build on the lessons we learned from the COVID-19 response: highly networked, well-resourced, public-private partnerships can drive far more meaningful action than the kind of slow-moving bureaucratic lumbering of typical UN processes. Could the GPG discussion offer us a more actionable way to address climate?

There is a real risk that the Common Agenda could become another coin thrown in the Trevi fountain, a symbolic gesture that quickly disappears below the surface. Given that it poses many uncomfortable questions for member states’ role in driving us towards extinction, there will be strong resistance to many of its more ambitious initiatives. We are all too accustomed to this. Twenty-five years ago, the Brundtland Commission called for an approach to development that took future generations into account. And fifteen years ago, a serious effort was made to propose a broader approach to GPGs that would have seen the environment better protected.

But something has changed. This week, tens of thousands of protestors in Glasgow demanded that leaders act rather than promise. Over one million people surveyed by the UN last year overwhelmingly listed “climate change” as their biggest issue—they will not accept another twenty-five years of inaction. From the Arab Spring to the COVID-19 response, we have learned that change often happens faster and more organically than we think. Guterres has placed himself on the right side of this battle, standing with young people and future generations, and offering meaningful pathways for them to be represented in global processes. The political leadership of the world’s most powerful, polluting states should seize this opportunity and act on their promises today, not only accelerating their action on climate, but seeing the value of the proposals in Our Common Agenda. The existential risk to their political livelihoods may be more immediate than they think.

This article is the first in a series reflecting on global climate action in the wake of COP26.

Adam Day is the Director of Programmes at the Centre for Policy Research at United Nations University. He tweets @AdamDayNYC.