The Global Observatory has compiled a few of the creative, powerful, and useful visualizations from 2019 that help to better understand and contextualize global events and issues.

In a year where protests gripped many parts of the world, one of the movements most widely covered in Western media was in Hong Kong. In October, the South China Morning Post put together a series of infographics that capture key moments in the protest movement and their levels of intensity throughout the year. 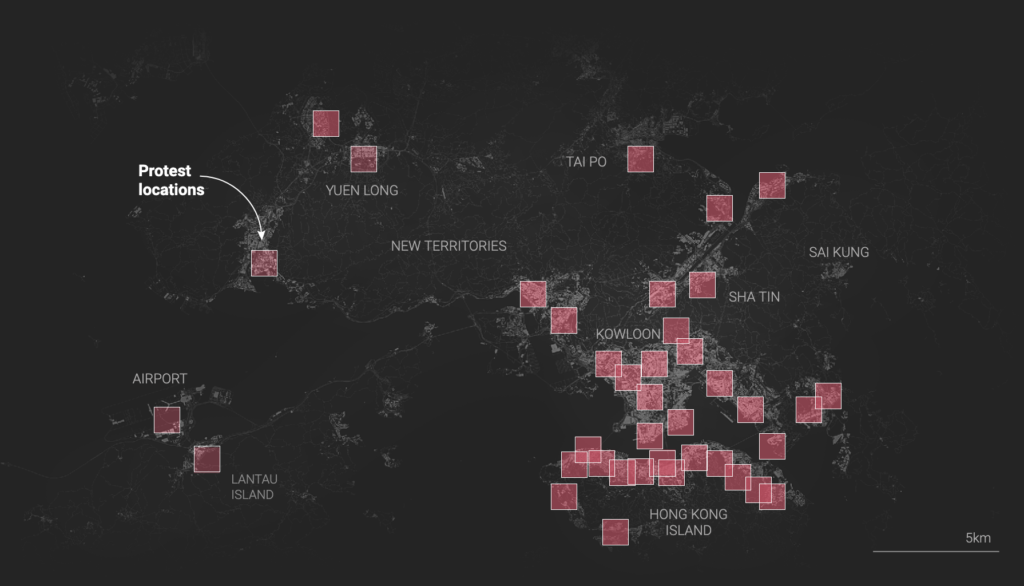 Ed Hawkins—a climate scientist behind the spiral chart of global temperature changes—created a temperature stripes graphic to visualize localized changes in temperature between 1895 and 2018. The warming stripes went viral, and through the #ShowYourStripes hashtag, thousands were shared on social media.

Download and use similar graphics for virtually every country: https://t.co/Zd3HFHcXQe #ShowYourStripes pic.twitter.com/N5oyXMMSmu

Where Are the Kurdish People Located?

In early 2019, forces in Syria backed by the United States declared victory over the Islamic State (ISIS). Later in the year, after strong public and private expressions of discontent from Turkish President Recep Tayyip Erdoğan, US President Donald Trump withdrew US forces from Syria, placing Kurdish allies at imminent risk. Kurdish troops in Iraq and Syria have been a pivotal support to the US and European countries in the fight against ISIS.

The below graphic by AFP shows where Kurdish populations are located, where they have recognized autonomy, and where they are in conflict with Turkey.

Infographic locating Kurdish regions in Turkey, Syria, Iran and Iraq as a senior Kurdish commander tells #AFP it is “inevitable” they will agree a deal with Damascushttps://t.co/y6i7AHACWB pic.twitter.com/wx9JLti6lJ

Tensions between the US and Iran have been escalating since the US withdrew from the Iran deal—most dramatically with the killing of Major General Qassem Soleimani at the beginning of January. One of the key tactics in the US government’s “maximum pressure” campaign in recent years has been the sharp increase in the use of sanctions.

The International Crisis Group published an interactive tool that illustrates all the individuals and entities in Iran sanctioned by the US and categorizes them by year and type. 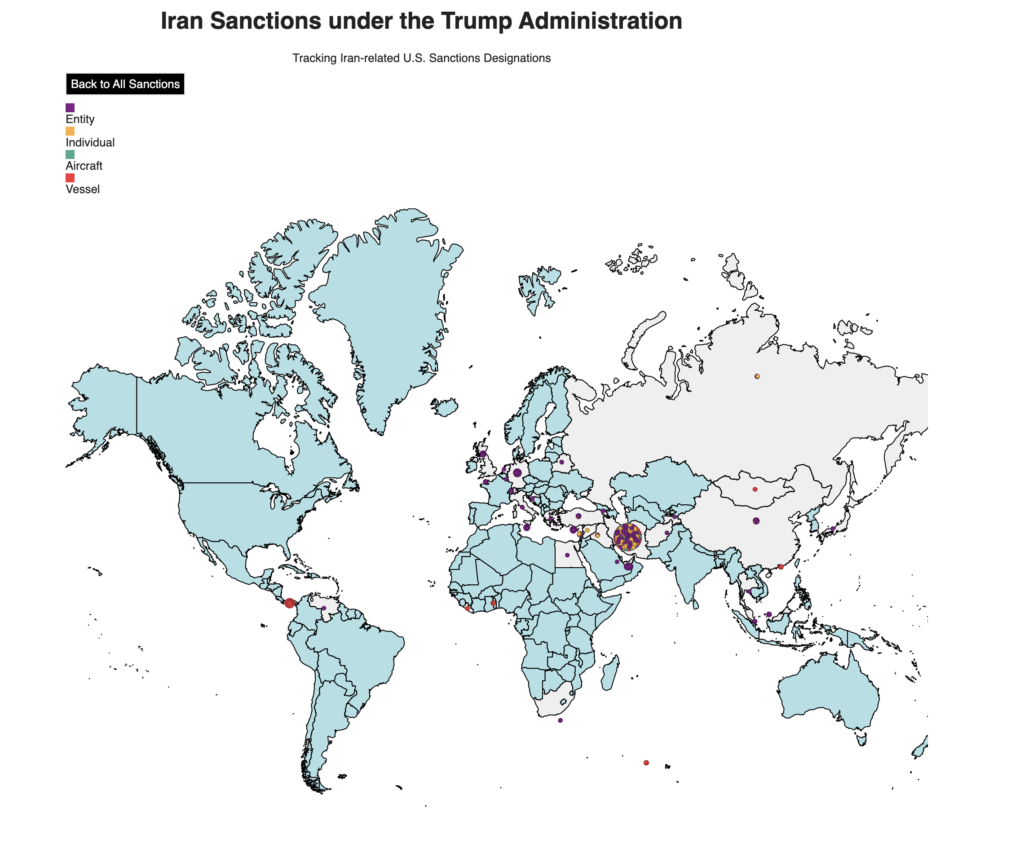 Since the end of the Cold War, the United Nations Security Council has authorized or recognized the deployment of more than forty parallel forces that operate alongside UN peace operations. The division of labor between UN missions and these parallel forces has blurred, and their goals have sometimes come into conflict.

This infographic, published by the International Peace Institute in October 2019, shows where the Security Council has currently, and in the past, authorized parallel forces. 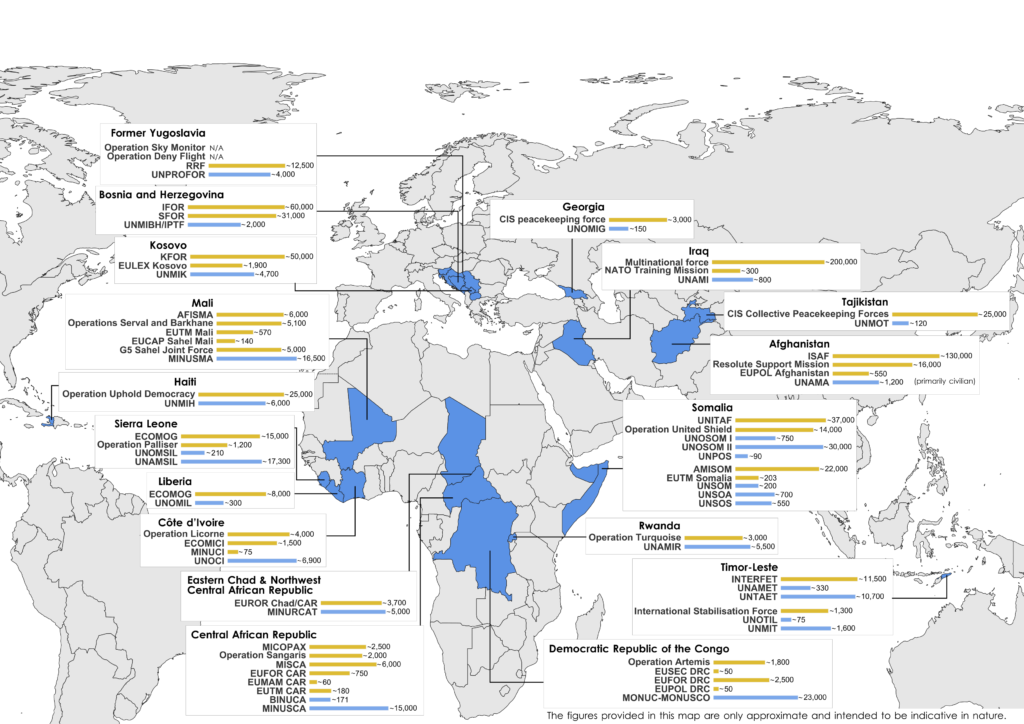 Since US President Donald Trump first slapped tariffs on Chinese goods in 2018, there have been a series of tit-for-tat increases in tariffs from both sides. To help keep track of how much tariffs have been applied and on what products and sectors, the Financial Times published this graphic that captures the escalating trade war through the middle of 2019. 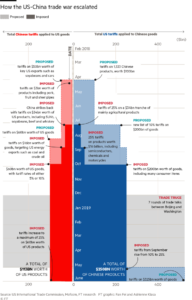 As climate change accelerates, it is often difficult to comprehend the scale of the impacts. The accumulation of trash, especially plastic trash, is one of these areas. What do 1 million plastic bottles look like? Reuters sought to answer that question with their powerful visualization of piles of plastic bottles next to global landmarks. 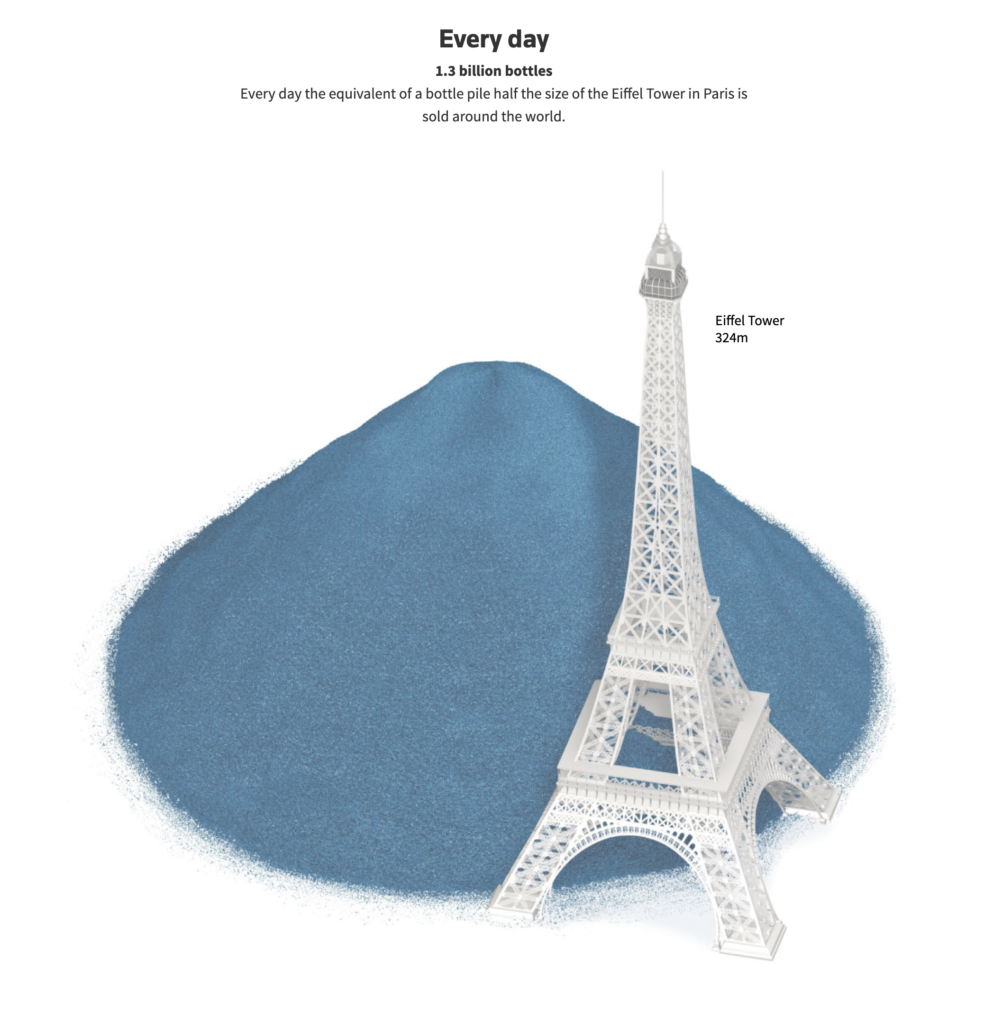