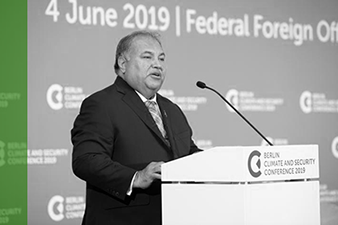 As the debate over climate-related security risks grows, many Pacific Island states are calling for more action by the international community to better address the links between climate change and global security. Baron Waqa, who was President of Nauru at the time of this interview, highlighted some of these calls while speaking to Anna Maria Link of adelphi in April; he also outlined the challenges in getting the climate-security issue on the United Nations agenda.

What steps are Nauru and the Pacific Island states calling for the international community to take in order to better address the links between climate change and security risks?

The Pacific is calling for the appointment of a Special Representative of the Secretary-General (SRSG) on Climate and Security. The SRSG would fill a critical gap within the UN system and help us manage climate security risks more effectively. The SRSG should have three initial responsibilities: the first would be to provide an update to the Secretary-General’s 2009 report on the security implications of climate change based on the latest research findings, including an assessment of the capacity of the United Nations system to respond to the security implications of climate change; secondly, the representative should produce a new report, in cooperation with relevant scientific bodies, that identifies and analyses potentially dangerous tipping points within the nexus of climate and security, along with recommendations for improving our monitoring and response; and finally, the SRSG should provide support to interested vulnerable countries for developing preliminary climate-security risk assessments.

This mandate should grow over time to include facilitating regional and cross-border cooperation on issues that might be affected by climate change, engaging in preventive diplomacy, as appropriate, and supporting post-conflict situations when climate change is a risk factor that could undermine stability. It should be noted that this is not a new proposal. It has been on the table since the last formal debate on this matter in 2011. Furthermore, I would especially like to see clear mechanisms being developed to ensure that the people from the affected countries are driving the conversation.

You have been a strong proponent of placing climate change-related security risks squarely on the UN Security Council’s agenda. What are the biggest challenges that still need to be overcome to incorporate climate security risks in the Council’s mandate?

There are still very large differences of opinion regarding the appropriate role of the United Nations system in the context of the security implications of climate change. The Pacific continues to be the strongest voice for a robust UN response; however, we are seeking a more robust response from the UN system as a whole, within each organ’s respective mandate. The response should not be overly focused on action by the Security Council, which may have some powerful tools, but also have some limitations in comparison to other UN bodies.

Nonetheless, the Council needs better climate-related security risk information, analysis, and early-warning mechanisms to be able to make informed decisions. Sound analysis of current and future security risks are key for the Council to carry out its main functions, which are preventing conflict and sustaining peace. UN capabilities with respect to climate-related security risks need to be further developed to support the Secretary-General’s reporting and risk assessments, which is entirely consistent with the intent of the 2011 Presidential Statement and recent Security Council resolutions on the Lake Chad Basin, West Africa, the Sahel, and Somalia.

Despite these challenges, the debate at the United Nations continues to move forward as climate change impacts every aspect of its work. In response to recent Security Council resolutions, the UN has taken its first steps toward integrating resilience planning into the work of peacekeeping operations. This seems like a positive development with the potential to bring more durable peace and security to people living in fragile situations. Also encouraging is the establishment of a mini-mechanism within the Department of Political and Peacebuilding Affairs, which will help build UN competence on this issue.

Some countries resist specifically the expansion of the Security Council’s mandate to include climate security risks. What are their main arguments and concerns, and how would you respond to them?

Some have also expressed concerns about the securitization of climate change, fearing that it will lead to greater militarization of the issue. This is precisely the dynamic that we think a robust UN response can help avoid. If we do not proactively address the security implications of climate change, then the onset of climate-driven crisis will make it more likely that some will opt for military responses–not less.  The military branches of many governments with global reach have been analyzing this issue for more than a decade–mostly behind closed doors. Bringing the issue before the United Nations would provide the opportunity for all to engage in this critical discussion.

The last and most concerning source of opposition comes from a few powerful countries that have long sought to limit the reach of multilateral institutions like the United Nations and to avoid any constraints on their ability to act unilaterally. It could be argued that this logic is at the heart of the Paris Agreement, and I fear that it is not compatible with a world in which most Pacific Islands are viable. I harbor no illusions that the fate of my country concerns them in the slightest, but I am also not prepared to give up pursuing a way forward.

This article is part of a series on climate, peace, and security in partnership with the Center on Climate and Security. It was first published on adelphi’s Climate Diplomacy website.