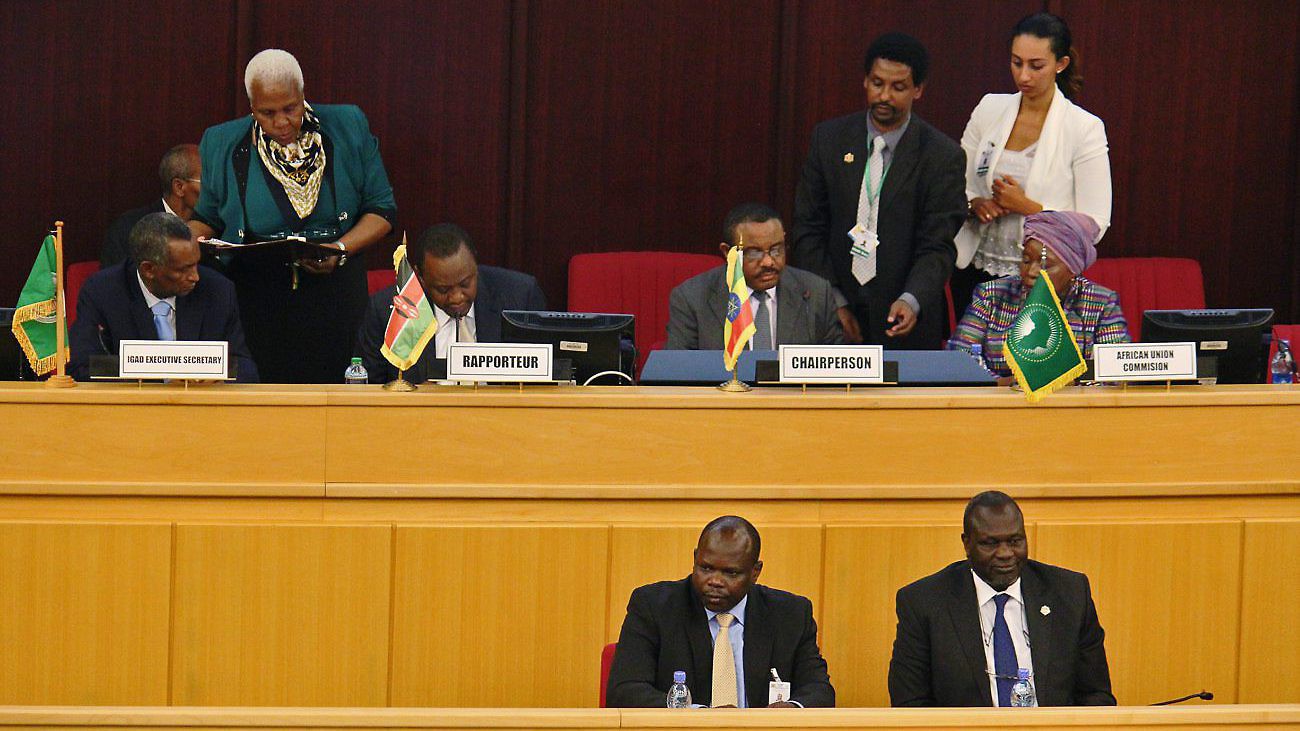 Today marks the end of the fourth year of civil war in the youngest state on earth, South Sudan. Over the years, attempts to build a lasting peace agreement have faltered. The Agreement on the Resolution of the Conflict in South Sudan (ARCSS)—facilitated by the Intergovernmental Authority on Development (IGAD)—was signed by President Salva Kiir Mayardit and former Vice President Riek Machar Teny in August 2015, but by July 2016 the deal broke apart after several days of heavy fighting between Kiir’s and Machar’s troops in Juba. Current attempts to revitalize the ARCSS, although welcome, face an array of obstacles. To overcome these and to avoid repeating the same mistakes that led to the demise of the ARCSS, new thinking and approaches are needed.

Obstacles to a Lasting Peace Agreement

The model of peacemaking thus far has been characterized as “big tent”: after several rounds of fighting lead to a stalemate, the government provides rebel leaders with an opportunity to control and disperse resources, and to integrate their militia into the national army. This policy formed the basis of the ARCSS. In June 2017, the IGAD council of ministers called for a “high-level revitalization forum” of the ARCSS. The initiative has support within the government and from all major opposition groups who have expressed their readiness to participate in the negotiations. However, IGAD diplomats face a delicate balancing act. Some provisions of the peace agreement, including the security arrangements, are clearly obsolete and need to be reviewed. At the same time, opening the whole agreement for renegotiation risks drawing out the process and potentially losing some of the commitments to constitutional reform, economic management, and transitional justice that are included.

More importantly, it is fundamentally unclear how “revitalization” will look. Since the July 2016 crisis, political and military realities have changed considerably. After Riek Machar fled the country, President Kiir appointed the opposition politician Taban Deng Gai to replace him. Yet the government’s expectation that he would be able to bring along opposition fighters with him has not been met. Most of Riek Machar’s troops remain loyal to him. His involvement in the process remains a major stumbling block for the negotiations. No one in the diplomatic community in Juba that I spoke to during a recent research trip expects Machar to return to Juba, after SPLA units tried to kill him twice, in 2013 and 2016. Accommodating Machar in the government thus seems impossible, though marginalizing him has also not worked.

The underlying problem remains the logic of dividing the spoils. Positions of authority in South Sudan have served the self-enrichment of office-holders and the accumulation of political budgets. As a result of the insecurity in the country and the macroeconomic crisis, the resources that could be allocated are becoming smaller. Moreover, the lack of accountability of officials and politicians is a core challenge that contributed to the outbreak of the civil war in the first place. If there is no overarching political vision for South Sudan, another purely transactional power-sharing deal will inevitably result in dissent and confrontation just as in 2016.

The last few years have made clear that there are no quick fixes in South Sudan. No single process will be able to bring a comprehensive peace to the country in the foreseeable future. For the time being, a number of measures can be taken that may mitigate and contain the scale and brutality of the violence, and even create space for a long-term peace agreement.

The first is for IGAD mediators and international interlocutors to make clear that perpetrators will face justice. Looting, sexual violence, and mass atrocities need to have consequences. Regional support for asset freezes and anti-money laundering measures, for example, is growing. In September, the African Union Peace and Security Council warned that the revitalization process represented “a last chance for the Parties” and threatened unspecified sanctions against spoilers. After the United States strengthened its unilateral sanctions regime, the Kenyan Central Bank instructed its banks to implement asset freezes that the UN Security Council had passed in 2015.

Second, international actors, such as the Troika—the three-nation group supporting negotiations consisting of Norway, the UK, and the US—but also Germany and the EU, could lobby other countries for an informal arms embargo on South Sudan. US pressure has already stopped Sudanese arms deliveries for Machar’s troops. Engaging with Ukraine, Uganda, and Egypt, which the UN Panel of Experts sees as the government’s arms dealers, would be crucial as well. A commitment to a ceasefire at the beginning of the revitalization forum could provide the diplomatic backing for those states to reconsider their covert arms shipments.

Third, empowering civil society and other constructive forces will be crucial. The churches play a very important role in peacemaking and reconciliation as they are the only institutions with a reach in all corners of the country. They also have the patience and stamina to stay engaged when national and international actors have long left. Their biggest advantage is also a challenge though. Part and parcel of South Sudanese society, they are not immune to the polarization that has divided the country. Work on intercommunal conflicts by the churches, the UN mission, and non-governmental organizations needs donor support, including for targeted early recovery measures.

A Need for International Introspection

Finally, Western countries, and in particular the Troika, will contribute more positively to negotiations if they are aware of their own impact on the conflict and the peace process. For example, Troika acceptance of the replacement of Riek Machar with Taban Deng Gai lent legitimacy to the process. On the other hand, the rushed and failed effort of the US to expand the UN sanctions regime and create an arms embargo “gave Juba a degree of increased confidence,” in one Western diplomat’s perception. The government then continued its operations in Equatoria that displaced hundreds of thousands of civilians, and obstructed humanitarian access. Another example is the disappointment of South Sudanese civil society organizations when German foreign minister Sigmar Gabriel stood them up during a visit in August 2017.

Ultimately, there is no silver bullet to ending the civil war in South Sudan. At the very least, international actors should ensure that their actions and omissions do not prolong the suffering, however unintentionally. Overcoming the tendency to broker conventional transactional power-sharing agreements would be an important start.

Gerrit Kurtz is a PhD candidate at King’s College London and a non-resident fellow with the Global Public Policy Institute in Berlin. His research focuses on conflict prevention diplomacy in South Sudan and Sri Lanka.