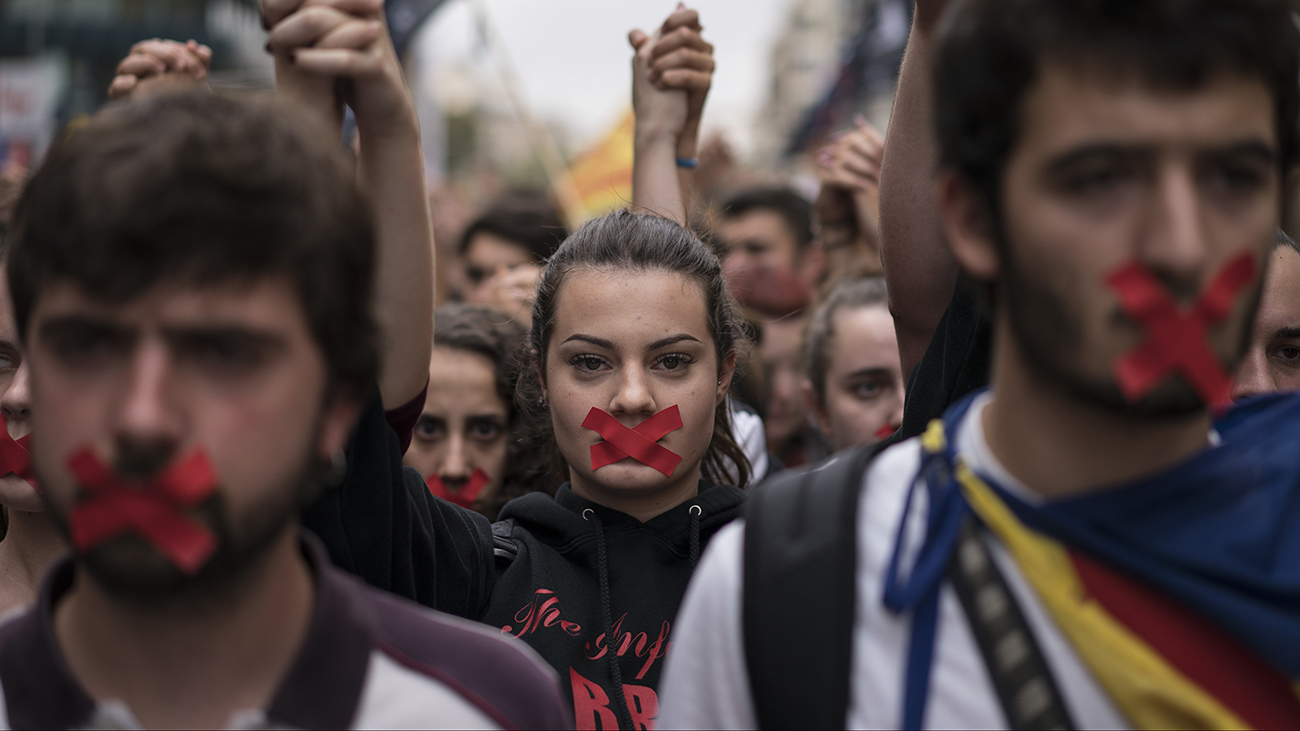 October 1 witnessed scenes of brutality on the streets of Barcelona as Spanish police tried to stop people from voting in a referendum on Catalan independence called by the Catalan autonomous government, resulting in about 800 injuries. Images of police violence have been flashed around the world putting the Spanish authorities in an unwelcome spotlight. These events followed an ominous week in which 10,000 police were sent to Catalonia from other parts of Spain, and in which videos appeared of locals in southern Spain seeing them off waving Spanish flags, on one occasion to chants of “go get them” (a por ellos). The government seems to have been convinced by its own rhetoric that the separatists were a minority and perhaps drew parallels with radical nationalist protests by youngsters in the Basque Country that have been expeditely dispersed. But it has been surprised by the sheer determination of many ordinary Catalans, old and young, to vote. Hence, rather than young radicals, it was often the middle aged and elderly who were in the firing line.

These events graphically demonstrate the inability of Spain’s political actors to find a political solution to Catalan demands for either great autonomy or independence. Quite the contrary, since the 2000s there has been an action-reaction spiral in which political and social tensions have been increasingly ratcheted up. When the Spanish Socialist Party (PSOE) was in power in the 2000s, after long and hard negotiations, a new Catalan autonomy statute was approved in the Spanish parliament in June 2006. It was not to the liking of Catalan nationalists, but was generally accepted. However, the People’s Party (PP), in opposition at the time, referred it to the Constitutional Court, which in June 2010 declared several of its articles unconstitutional.

The dominant wing of Catalan nationalism had until that time been pro-home rule rather than independentist. But following the decision of the Constitutional Court, separatist sentiment grew rapidly. Two developments then radicalized the situation further. First, the PP came to power following the general elections in late 2011. Second, in September 2012, in a dramatic shift in stance, the president of the Catalan autonomous parliament and head of the nationalist coalition Convergència i Unió (Convergence and Union), Artur Mas, declared himself in favor of a referendum on Catalan independence. Mas was influenced by the rising tide of independentist sentiment. Moreover, a new generation of Catalan nationalist politicians were more willing to take such a step than their more cautious predecessors, who had been active in the struggle against the Franco dictatorship in the early 1970s. The scene was then set for an all-out showdown. The Catalan government held a consultative referendum on independence in November 2014, which the central government declared illegal but allowed to go ahead. Then following elections to the Catalan parliament in September 2015 a new nationalist coalition announced it was to hold a definitive referendum on Catalan independence. The PP government refused to negotiate any such referendum, and when the Catalan independentists affirmed they would press ahead anyway vowed to stop it by all means.

The first key question is, therefore, why was no compromise possible? In the first place, despite the opposition of all the major Spanish-wide political parties, the independentists took the decision to organize what, with the constitution in hand, the government was able to label as an unconstitutional referendum. An alternative more moderate strategy would have been to build alliances with Spanish left-wing opposition parties for constitutional reform. Second, the ruling PP party is totally opposed to any change to the constitution, let alone agreeing to an independence referendum. One has to bear in mind that the PP sees itself as the guardian of national unity and that in its heartlands in central Spain “anti-Catalanism” is a vote winner. Indeed, after the approval of 2006 Catalan statute, not only did it refer it to the Constitutional Court, it also organized a petition against it. And elements close to the PP were involved in a boycott of Catalan cava wine. At the same time, there is a very active right wing media, made up of outlets like the media group Intereconomía, the radio station COPE, and newspapers like La Razón, that act as “ginger groups,” demanding the government take a tough line against Catalan nationalism.

Political compromises are also not helped by the polarization of media outlets, limiting room for dialogue. Spanish public television is to a large degree under the control of the government of the day (as was seen on October 1, with the lack of coverage events in Catalonia). For it to interview the leader of the Catalan government, Carles Puigdemont, in the same way as the BBC might interview Nicola Sturgeon, would be unthinkable. But Spain’s autonomous communities mimic this arrangement, with Catalan public TV lining up staunchly behind the autonomous government. Political interference also, it seems, stretches to the judiciary. There were claims by the opposition parties that the PP influenced the selection of José Manuel Maza as Solicitor General in November 2016. And in the run up to the referendum two experts working for the UN Human Rights Council warned that the judiciary were overstepping the mark in their attempts to block it.

The question now becomes, where do things go from now? The actions of the Spanish police have strengthened the independentists by putting Catalonia in the international spotlight, and by provoking widespread condemnation. Indeed, despite government repression, the Catalan government has been able to announce election results. It affirms that over 2.2 million persons voted (42% of the census), and that just under 90% voted for independence. In addition, the actions of the police have meant that it has been impossible to count 770,000 ballot papers. Given the conditions in which the vote was held, and that parties against independence had called on their voters to stay away, it is difficult to argue that it is a faithful representation of all Catalans views on independence. However, comments made by Puigdemont on the night of October 1 indicate that the Catalan government feels it has the moral authority to proceed along the path of independence, while at the same time, asking the EU to intervene in the conflict.

There is great political uncertainty, but two broad scenarios seem possible. First, the Spanish government goes a step further and invokes article 155 of the constitution. This allows it to intervene in an autonomous community to force it to carry out its “obligations.” This requires an overall majority in the Senate and as the PP has such a majority it could theoretically trigger article 155 without support from any other political party. However, to take such a momentous step without the support of the PSOE would be very difficult.

Second, the government is brought down and there are elections. Should the PSOE help bring down the government, then one presumes its post-election strategy would be to seek a coalition with the other major opposition grouping, Podemos and its allies, to form and alternative government. This puts enormous pressure on the leader of PSOE, Pedro Sánchez. Should he back the triggering of article 155, he will be in danger of being seen as a stooge of the governing PP. Moreover, any such move would face mass protests in Catalonia and, presumably provoke disquiet in EU circles. However, if he takes the alternative route, it will be difficult for the Socialists not to accept the demand of Podemos that a new federal constitution be elaborated and that it – along with the option of full independence – be put to the Catalan people. The Socialists have so far refused to endorse such a referendum. The major Andalusian branch of the party, led by Sánchez’s rival Susana Díaz, is even against constitutional reform. And in any case, would the parties of the Left be able to convince the Catalan government to wait, and not simply declare independence?

What is clear is that the pace of events will quicken exponentially in the following days, and that there will be considerable pressure on the EU to drop its stance that the “Catalan question” is an internal problem for Spain to resolve and try and help find a political solution. The events of October 1 have provoked a massive political crisis and, I think, for the first time put Catalan independence seriously on the table. Ironically, until this date, while the majority Catalans wanted a referendum most surveys indicated that less than 50 percent backed independence. Will this still be the case? And could it be that the actions of the PP, the party that sees itself as the guarantor of Spanish unity, has set Catalonia on the road to independence?