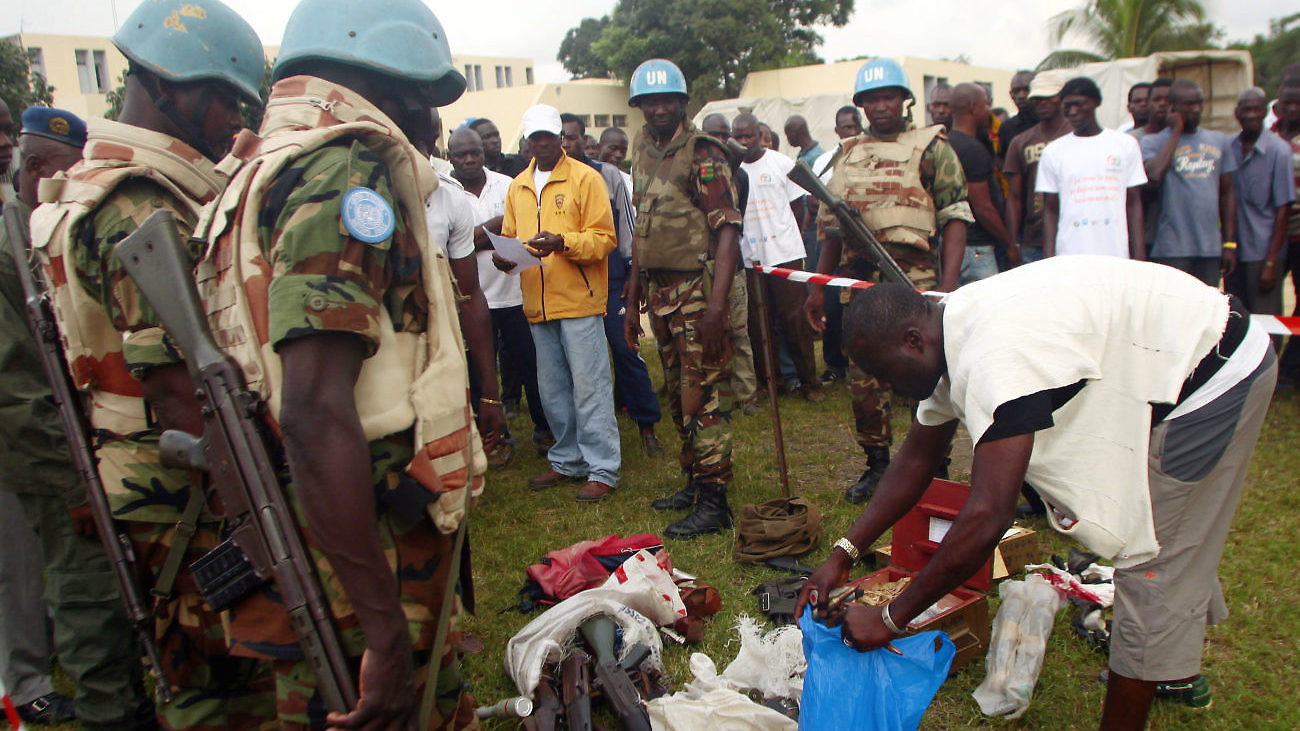 Ex-combatants who fought in support of President Alassane Ouattara voluntarily surrender their arms to national authorities in the presence of United Nations peacekeepers, in the Abobo neighborhood of Abidjan, Wednesday, Feb. 1, 2012. (AP Photo/Emanuel Ekra)

On June 30, 2017, the United Nations Operation in Côte d’Ivoire (UNOCI) reached the end of its mandate after fourteen years in the country as a multi-dimensional peacekeeping force. International actors and Ivorian national leaders have proclaimed that Côte d’Ivoire—where a violent ethno-regional conflict divided the country into two separate zones between 2002 and 2011—is now stable enough to provide for its own security, and that the return to peace is “irreversible.”

Yet recent events in Côte d’Ivoire paint a more worrisome picture. Uprisings among former rebel soldiers inside the army in January and May earlier in 2017, sporadic protests among ex-combatants upset about the management of the post-conflict Disarmament, Demobilization and Reintegration (DDR) program, and an increasingly bitter battle of succession within the ruling Rassemblement des Houphouëtistes pour la Démocratie et la Paix (RHDP) coalition in light of upcoming elections in 2020 all place the long-run stability of West Africa’s second-largest economy into question. Will Côte d’Ivoire escape the “conflict trap” and continue on the path towards durable peace, or backslide into renewed violence and fragmentation?

One of the critical factors shaping this outcome will be the ability of the ruling civilian government to maintain its authority over the country’s armed forces in the face of heightened political pressure in the months and years ahead. In particular, the government must control the former rebel commanders who control the most critical units within the Ivorian military—the Republican Guard, the Special Forces, and the best-equipped units of the ground army.

However, many of these individuals have their own bases of power, independent of the ruling regime in Abidjan. Frequently, this power is rooted in the networks and institutions built up during nearly a decade of civil war. Former rebel commanders have considerable economic resources at their disposal and maintain personal ties with a wide array of actors: local community elites outside the capital, ex-combatants who have not fully reintegrated into civilian life, and civilian politicians of various affiliations inside the National Assembly parliament.

These linkages complicate Côte d’Ivoire’s post-war peacebuilding project because they empower commanders to challenge the authority of the ruling government and undermine the cohesiveness of the armed forces, yet at the same time make these actors indispensable for maintaining short-term stability. The consolidation of long-term peace and a more coherent security sector in Côte d’Ivoire will require that national leaders and their international partners work to loosen the grip of former rebel leaders on the parallel chains of command and private armed networks that they control, while guarding against the risks of provoking violent backlash.

Côte d’Ivoire’s political-military crisis, which pitted the predominantly northern-supported Forces Nouvelles (FN) rebel group against the ruling regime of Laurent Gbagbo, partitioned the country into government and rebel-controlled territories from September 2002 to April 2011. On the FN-controlled side of the ceasefire zone—patrolled by UN peacekeeping forces—the commanders of the Forces Armées de Forces Nouvelles (FAFN) reigned supreme as local political-military governors. The top-ranking FAFN commanders, known as commandants de zone, oversaw both the recruitment and training of new soldiers as well as the provision of basic services for the populations under their control.

In many cases, the FN relied heavily on the collaboration of local community leaders—traditional chiefs, teachers, and civil society organizers—to facilitate their access to the population. In a survey of sub-prefectures formerly controlled by the FN carried out in the summer of 2017, we found that in 38 of 50 localities (76%), community elites either mediated or actively collaborated with the efforts of occupying rebels to ensure the functioning of governance services. We also found that in 36 out of 50 surveyed localities (72%), FN rebels were involved in the administration of at least three core areas of governance, such as local policing, land governance, education, healthcare, and infrastructure. FN rule thereby created a thick web of formal and informal affiliations, patron-client ties, and personal friendships that intertwined community members with rebel governance structures.

Wartime Networks in the Post-Conflict Era

The 2010/2011 post-election crisis in Côte d’Ivoire triggered the downfall of the Gbagbo regime, and the integration of northern rebel forces into the state military, renamed the Forces Républicaines de Côte d’Ivoire. Yet despite the insurgents’ political victory, the dense ties between FN commanders and local communities in rebel-controlled areas did not disappear overnight.

In some cases, the persistence of FN leaders’ influence is manifestly illegitimate and is based on their control of illicit economies—such as diamond and gold mining operations near areas like Séguéla and Dabakala—which have been documented by the United Nations Group of Experts on Cote d’Ivoire and by local and international media. Moreover, many former comzones retain access to private stocks of arms and ammunition that were never turned over to the national DDR program.

In other cases, however, the persistence of rebel commanders’ influence is more multi-faceted. Several commanders have remained important public and political figures in regions where they were able to build a reputation of effective rulership during the armed conflict, and where they have generously distributed patronage resources. For instance, the commandant de zone Hervé Pélikan Touré (“Vetcho”), who controlled his hometown of Katiola during the war, still enjoys considerable prestige and influence in the region. As one local public official explained, “With Vetcho, we see each other, we greet each other, the contact is permanent … His elements are still here … they meet with him regularly. And then he brings help to the population.”

Indeed, we found that in over half (54%) of the localities we surveyed, former FN leaders have continued to make regular private visits to the area since 2011 in order to attend community ceremonies (such as marriages, funerals, and religious events), to visit the homes of traditional authorities, and in some cases to make donations to local development projects such as schools and health clinics. And in a significant number of cases (34%), FN commanders are known to provide material support—such as food, spending money, and jobs – directly to their former armed supporters.

These linkages between former FN leaders and local communities in Côte d’Ivoire are a double-edged sword for the central government in post-war Côte d’Ivoire. Despite the redeployment of state police forces across former rebel-held territory, middle and upper-ranking ex-FAFN officers remain central actors for maintaining order and security within these regions. The former commandants retain significant sway, if not complete control, over irregular armed forces in these areas—many former-FN rank-and file troops who have scraped out a living since 2011 by manning informal “checkpoints” and working odd-jobs for local enterprises (which are themselves sometimes owned by a former rebel chief). As a result, the Ouattara regime often relies on these actors to mediate disputes swiftly and quietly. In the western city of Man, for example, one government official acknowledged that, when protests among ex-combatants began in January 2017, Losseni Fofana—the former comzone of the area—played a crucial role intervening to “help us put things in order” and “return calm.”

Yet at the same time, the persistence of rebel commanders’ influence poses a threat to the cohesion of the state itself. For one, the availability of large networks of human and material resources grants these rebels-cum-soldiers a degree of bargaining leverage and autonomy from the civilian government that makes them difficult to control. For example, the Ouattara government faced public embarrassment in 2015 when it ordered Lt. Col Fofié Kouakou Martin to leave Korhogo (the city where Martin governed as commandant de zone during the crisis), and the order was simply ignored. As one former UNOCI official said, “We initially wanted to cut the branches [of the comzones]. But these branches go deep, and the question is how to reduce their influence without threatening the security of the state.”

Moreover, efforts to restructure the state armed forces and improve military effectiveness and cohesion, undertaken as part of the national security sector reform (SSR) program, are rendered difficult by the powerful position of the former rebel commanders. Because these officers sit atop extensive patronage networks built up over nearly a decade of civil war, they have strong incentives to use their military positions to benefit close supporters and family members (rather than rewarding professional merit), and to resist reforms aimed at reducing the size of their bloated units. As one foreign military official observed, “It’s unclear how they will bring these guys to heel … And the only reason he [President Ouattara] gets away with it is because the country is not under any threat. If it were, these problems would have to be dealt with immediately.”

Despite official rhetoric seeking to portray Côte d’Ivoire as “peacebuilding success story”, the country’s post-war transition has been characterized by a highly fragmented security sector and weak civilian regime control over influential military officers. The Ouattara regime’s initiatives to crack down on the networks controlled by former rebel chiefs—particularly their continued involvement in illicit economic activities—have remained limited, a reflection of the civilian government’s limited bargaining power vis-à-vis the former commandants.

While problems of civil-military relations are not new in Côte d’Ivoire (in 2011 many top military officers were reluctant to fight for Laurent Gbagbo, for example), the current absence of a clear command structure is particularly troubling in the context of intensified political polarization at the national level, and growing discontent among ex-combatants who feel that they haven’t yet enjoyed the promised dividends of peace since 2011. If another major political crisis occurs, will military units obey orders coming from the President and Ministry of Defense? Or, in the worst-case scenario, will the armed forces fragment under pressure, with individual commanders and their political allies looking to shore up their personal interests by mobilizing private networks of resources and supporters?

Policy actors interested in shoring up stability in Côte d’Ivoire should remain vigilant to the risks posed by a military plagued by parallel chains of command and irregular armed networks, and support efforts to further professionalize the security sector. While efforts to weaken the social and economic linkages between commanders and local communities will be a necessary component of such reforms in the long run, there are risks of backlash associated with efforts to abruptly cut off communities and ex-combatants from the resources provided by former rebel commanders. Managing this dilemma will be one of the central security challenges of Côte d’Ivoire’s continuing post-war transition.