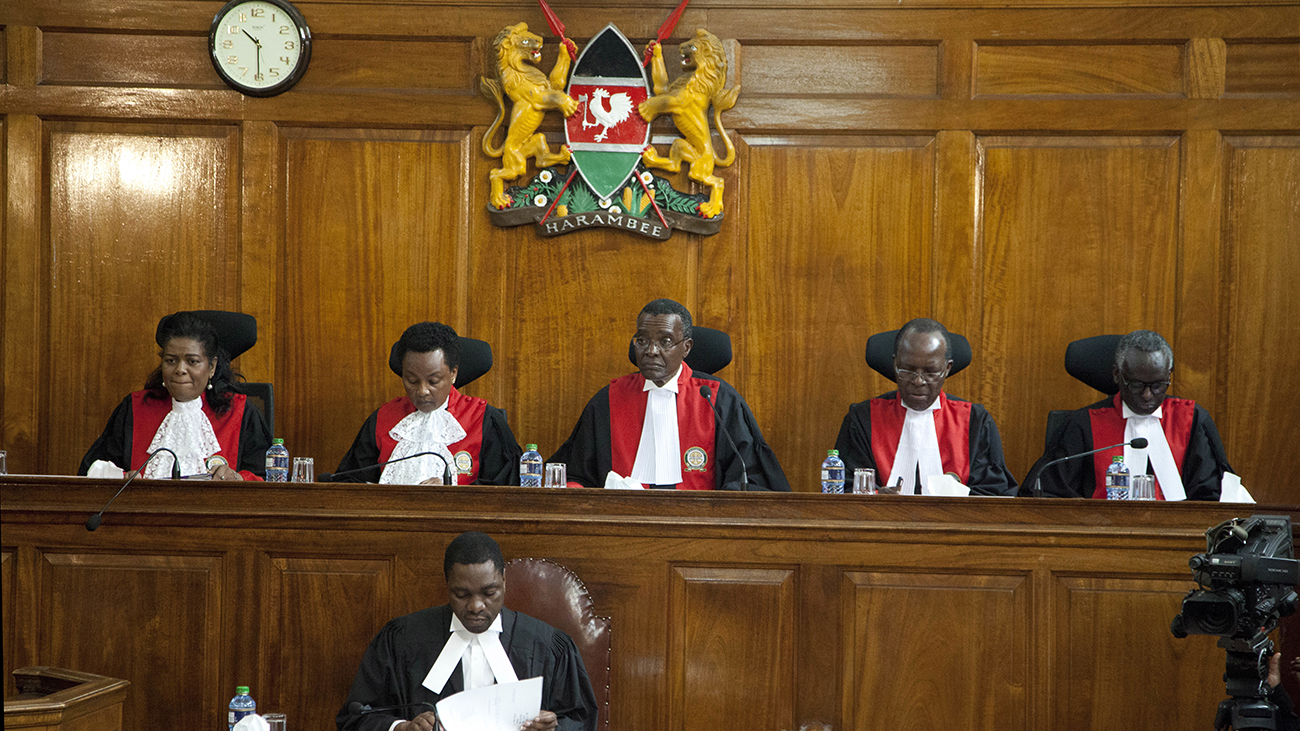 It took many by surprise when, on September 1, Kenya’s Supreme Court Chief Justice David Maraga declared the August 8 presidential election results null and void, accepting the contention of Raila Odinga, head of the opposition National Super Alliance (NASA), that the results had been subject to various irregularities. The Chief Justice reversed the victory that gave President Uhuru Kenyatta a second term and called for another election within 60 days; the new election has been set for October 26.

Kenyatta’s initial official response sought to calm potential street violence, stating that, while he did not agree with Chief Justice Maraga’s decision, he would accept the results and go forward with a re-run of the election. Since then, Kenyatta has escalated his rhetoric, saying the justices were “crooks” who had subverted the people’s will; Odinga has been similarly scathing about Jubilee’s intention to maintain power by any means necessary.

As preparations for the August 8 elections drew near, the memory of the 2007, in which more than 1,300 people were killed and 600,000 displaced, was still fresh in many minds. At that time, an extensive inquiry led by former UN Secretary-General Kofi Annan and had come up with a number of recommendations to prevent violence in the future. Only some of those were implemented. The 2013 election had been relatively peaceful, but tensions have again mounted around the 2017 election.

While not all Kenyans anticipate violence during elections, many were surprised not only by the relatively peaceful manner in which the August 8 elections were conducted, but by the apparently peaceful initial acceptance of the unexpected annulment of the results three weeks later. When the Independent Electoral and Boundaries Commission (IEBC) announced the re-election for a second term of the leader of the Jubilee Party Uhuru Kenyatta, his opponent Raila Odinga, head of the opposition National Super Alliance (NASA), quickly disputed the results. He held that the Electoral Commission’s announcement was premature and illegal, charging that the vote had been electronically manipulated; that not all the votes had even been counted when the results were announced; and that the international observers had prematurely greeted the results as free and fair. Many observers thought Odinga was making these claims mainly to mollify his supporters and to make clear his dissatisfaction with the results, not to force a re-run of the election.

The only apparent certainty at this point is that the election will go forward. Under the Constitution, the election must be held within 60 days; the IEBC insists that the October 26 date will be maintained despite a series of failed talks between the Commission and the two parties on revising electoral procedures, including changing the technical arrangements for tallying the votes and forwarding the results in a timely way to the Commission, and for international observers not to make precipitate and premature pronouncements. NASA representatives, however, have already walked out of the talks, claiming that recent parliamentary bills introduced by Jubilee had rendered free and fair elections unachievable. It is unclear whether Odinga will call on his supporters to participate or to boycott the elections. At this point, there is a significant danger of renewed street violence on election day and its immediate aftermath, regardless of levels of participation.

In advance of the election, the International Crisis Group and other NGOs have taken public positions urging reforms of the electoral procedures and greater public responsibility by Kenya’s national and regional leaders to ward off and avert catastrophic violence. They have urged the two parties to reach a public compromise, allowing preparations for the vote to advance in an open and transparent manner. Crisis Group has also urged international and Nairobi based diplomatic communities to bring both camps together, to press Kenyan politicians to play more open and transparent constructive roles; they have also encouraged key institutions especially the Electoral Commission and the security forces to fulfill their duties impartially, thus preventing massive violence from happening on election day and its immediate aftermath. All these are valuable proposals which, if implemented, would significantly reduce the risk of violence. Nonetheless, Kenya’s problems will not be resolved by the conduct of this election even if conducted peacefully.

These recurrent confrontations and tensions leading up to quadrennial national elections point to deeper fissures and splits going back to to pre-independence (colonial) Kenya. There are two views as to what underlies these recurrent tensions at every election. The first, as noted above, highlights ethnic tensions that could be a consequence of the exclusion of certain groups from state power and national developmental processes. The second asserts deeper structural faults accounting for and underlying the weakness of the state and the corruption of its institutions.

This second argument holds that Kenya enjoys at best a “negative peace” focused on the absence of open conflict in daily life but sidesteps the issues of “positive peace” in Kenyan society. “Negative peace” in this argument is achieved by avoiding a reckoning with the failures of the state—public corruption; silencing of dissent; excessive use of force by the security services against those seen as opponents of the state; the political use of the security services; the misuse of the public school system to encourage violence; and other abuses by those running the state and its institutions. Proponents of the “positive peace” argument call for a more forceful confrontation with the state and its agents. Under their argument, even the peaceful conduct of the 2017 election will be insufficient to restore or establish public confidence in the state. If Kenya’s democratic story is only centered on the notion of elections and violence in that period as opposed to anchoring it on the entire system “then the journey will fall short.”

Whichever of these two approaches transpire in the next two weeks the outcome of the October 26 election will have an important bearing not only on Kenya’s domestic situation but also on Kenya’s regional role. Given its central position in IGAD and the EAC as well as at the African Union Kenya’s example and approach will have a significant bearing on ongoing efforts by the African Union and the United Nations to strengthen peace and security in the East African region.

Sheila Kinya Gitonga is a Peace, Security and Development Fellow at the African Leadership Centre, King’s College and a 2017 African Junior Fellow at the International Peace Institute (IPI). John Hirsch is a Senior Adviser at IPI.