National Front candidate Marine Le Pen’s advancement to the second round of France’s presidential election, to be held May 7, was welcomed by far-right populists across the Western world. Given what were considered to be shock victories for the United Kingdom’s pro-Brexit campaign and the presidential bid of Donald Trump in the United States before her, Le Pen is inspiring both fear and hope of another upset to the established international order.

Brexit once seemed unthinkable to many: On the eve of the referendum, the Leave vote was just two points behind in the polls, but political betting markets gave it only a one in four chance of success. Trump was also about two points behind in the average swing state polls but given just an 18% chance of winning the White House. Now betting markets are giving Le Pen, who trails runoff rival Emmanuel Macron by more than 25 points in second-round polls, around the same chances they gave Trump (other predictors peg her chances of winning at anywhere from less than 1% to 40%).

This seems to be a dramatic overcorrection of conventional wisdom. It is tempting to think that we live in a post-Brexit, post-Trump world where anything is possible and polls are meaningless. But, in fact, subsequent analysis has shown the polls were not that far off on either Brexit or Trump, and the French first-round polls were remarkably accurate. Unless Le Pen somehow wins millions more voters to her side, there would have to be an essentially unprecedented polling error for her to win.

This is not to say the populist wave isn’t real. Populism, defined by Ronald Inglehart and Pippa Norris as the antithesis of cosmopolitan and liberal ideals, and a concept that cuts across the traditional left-right divide, has been around since ancient times. But Inglehart and Norris have found that since the 1960s, the average share of the vote won in Europe has increased from around 5.1% to 13.2%, and their share of parliamentary seats has increased from 3.8% to 12.8%. Far-right populists across the continent began gaining traction in the 1980s following the initial electoral breakthrough of the National Front under Marine’s father, Jean-Marie. This may have helped set in motion a transnational shift in how far-right parties in Europe were viewed, allowing some to break away from the untouchable status they’d acquired during World War II.

But while this shift is a necessary condition for electoral success, it is not sufficient. There is no evidence to justify viewing the electoral calendar as a row of dominoes, with a populist victory in one country boosting populists’ prospects in the next. The recent Austrian presidential election, for one, points in the opposite direction. After a court invalidated the results from the May 2016 runoff there, a rerun was held in December, less than a month after Trump’s victory. If there was a “Trump effect,” it was not a pro-populist one; the far-right candidate performed three percentage points worse than he had previously.

In place of Cold War–era domino metaphors, populism might, as The Economist suggests, better be seen as “a wave bearing down on a line of sand castles.” The wave will break against each country differently depending on the economic and cultural changes it is undergoing, the landscape of its political parties, and the design and durability of its political institutions. 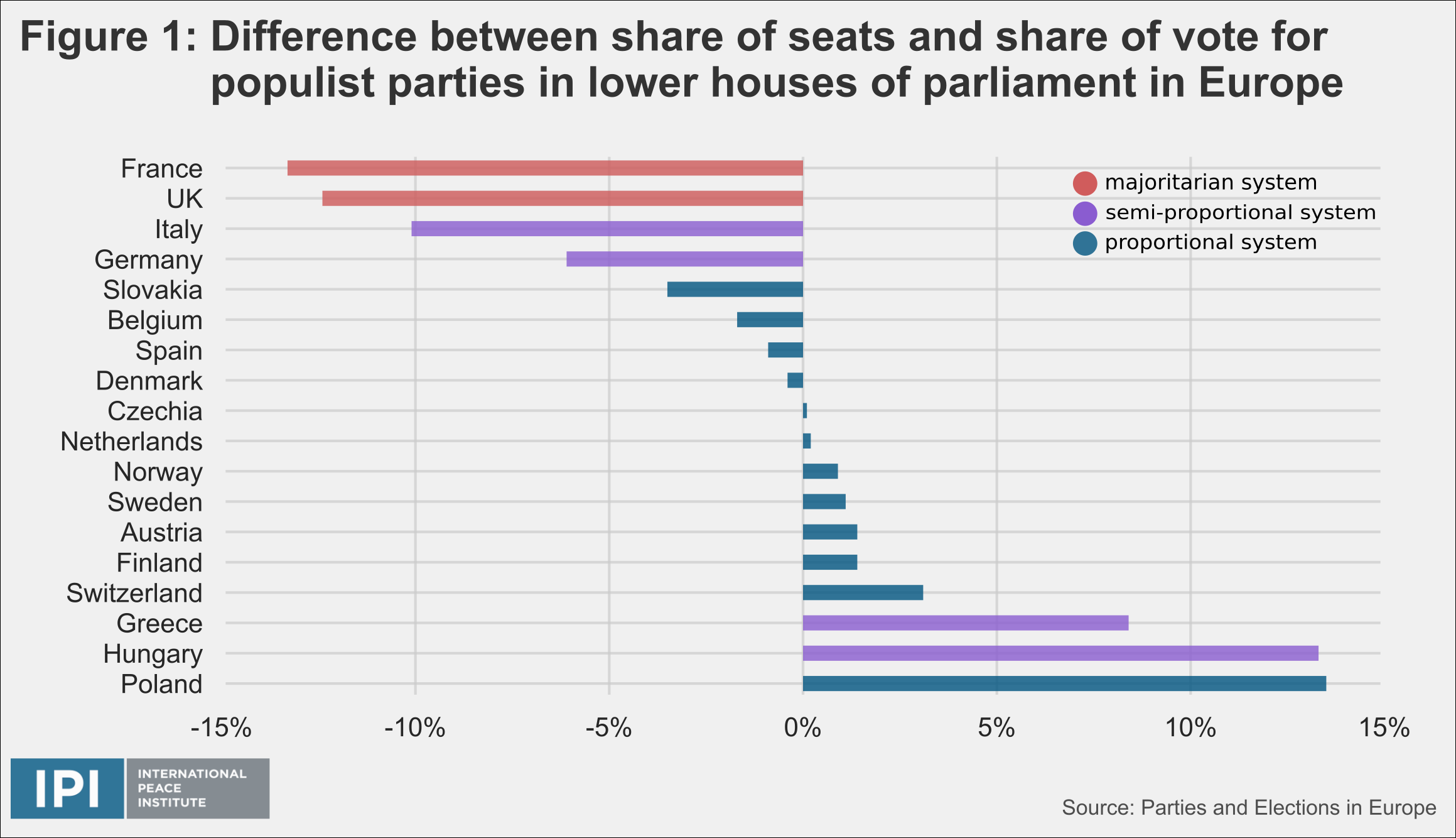 Recent elections have shown, in especially stark terms, the extent to which electoral rules can determine the fate of populist parties. In each of Europe’s three biggest economies—Germany, France, and the UK, all of which have elections this year—electoral rules have systematically disadvantaged populist parties (see Figure 1). Not coincidentally, these are in the minority of countries in Europe that do not allocate seats proportionally in the lower house of parliament.

In the UK, which is the only country in Western Europe with a first-past-the-post electoral system (i.e., candidates run in single-seat districts, and whoever wins the most votes forms a government), the far-right populist UK Independence Party (UKIP) has been largely unable to translate its electoral success into seats. Although it has improved on its performance in every election since 1997, it won its first seat in 2015, converting its 12.6% share of the vote into control of 0.2% of the seats in parliament. The UK’s system, which systematically disadvantages smaller parties, will likely stymie UKIP again in the June elections just called by Prime Minister Teresa May. (The party could have faced even steeper odds if the UK had approved a 2011 referendum on switching to a preferential voting system; extremist parties have not fared well under this system in Australia’s lower house of parliament, for example.)

Despite all the attention it has received, the National Front hasn’t won more than two seats in France’s National Assembly since the 1980s. Like the president, parliamentary delegates are elected under a two-round system, and supporters of other parties typically ally against National Front candidates when they make it to the second round (as they already have against Le Pen). The National Front will almost certainly hit this barrier again in June’s National Assembly elections, even if Le Pen miraculously wins the second round of the presidential election the month before (or perhaps especially if she wins—given the backlash following Trump’s victory in the US, Republican congressmen might consider themselves lucky they didn’t have to run in the wake of his election).

Turning to Germany, considering the sentiments far-right populism evokes in light of its World War II history, parties of this persuasion have been among the least successful in Europe; they have never won a seat in the Bundestag, though the far-right Alternative for Germany (AfD) has had recent successes at the state level. As in the UK and France, this can be attributed to Germany’s electoral system, which was explicitly designed to keep far-right parties out. Germans cast two votes: the first for a candidate in a single-seat constituency (as in the UK) and the second for a political party (as in most other countries in Europe). The second vote is meant to compensate parties that underperform in the first ballot to make the results more proportional, but only if they win at least three seats or 5% of the vote—a bar the far-right narrowly missed in 2013. Thanks to this proportional component, however, the AfD will likely break into the Bundestag in September (unless it is undone by escalating power struggles).

Regardless, proportional systems clearly make it much easier for small populist parties to win seats. France’s brief switch to a proportional system led to the National Front winning 35 National Assembly seats in 1986; a quick reversion to the two-round system cost the party all but one of those seats in the next election. As further cases in point, UKIP and the National Front each won a third of the seats for the UK and France respectively in the 2014 elections for the European Parliament, where all seats are awarded proportionally. This was despite their struggles in national parliamentary elections.

The simple deduction is that the proportional systems that are common to most European democracies work in favor of smaller parties, which populist parties tend to be. But, while proportional systems may let populists in the door to parliament, winning control is another matter. Populist parties in Europe have generally struggled to find coalition partners, which are almost always necessary to form a government. Even if the far-right Dutch Party for Freedom had won the most votes in the March elections, as widely expected, it would still have been locked out of power; all the mainstream parties had ruled out joining it in a coalition.

The same could not be said of the Netherlands if it had an electoral system similar to Italy’s. Given its long history of political fragmentation (more than 60 governments since World War II), a 2005 change to the Italian electoral law automatically gave the coalition that won the most votes a parliamentary majority. In 2013 this benefited the main center-left coalition. But later that year Italy’s constitutional court struck down the automatic majority as unconstitutional, and a government-backed 2017 constitutional referendum that would have reinstated this provision failed.

With the populist Five Star Movement now ahead in the polls, Italy’s ruling coalition may ultimately benefit from its position losing out in the referendum, which left a more proportional system in place. To see why, we can look at Greece, which has a similar system; it awards the party that wins the most votes a 50-seat bonus. In 2015 this bonus went to Syriza, a leftist populist party that surged in the face of unpopular austerity measures. Under a fully proportional system, Syriza would have been left with around a third of the seats, but with the bonus it got nearly half and was able to form a government.

Thus we find non-proportional electoral systems at the two extremes of populist success—they usually block populist parties, but when those parties gain enough support they can burst into parliament all the more dramatically. In general, however, populist parties in the West still have nowhere near the level of support needed to break through in majoritarian systems or to form governments in proportional ones. Where populist parties have succeeded, it has generally not been from a surge in the electoral success of traditional populist parties.

Slipping Through the Backdoor

For those concerned about the rise of populism, the conclusion is to focus less on the threat of populist parties taking power and more on populists taking over mainstream parties or pushing their policies in a populist direction. After all, Brexit did not result from UKIP winning power but from the ruling Conservative Party seeking to shore up its right flank against UKIP during the 2015 elections. Donald Trump became US president not by forming a new populist party but by punching his way to the top of the Republican Party. And, in a state election in March, Australia’s ruling party made a “preference deal” with the far-right One Nation party, which was at least partly to blame for both parties ultimately performing poorly. Yet this hasn’t stopped talk of further deals or the federal government announcing new barriers to citizenship—just the latest iteration of Australia’s now thoroughly mainstream nativism.

Finally, what of Hungary and Poland, the two European countries where populism has taken hold with a decidedly authoritarian streak? These are also the two countries where populist parties most outperformed their vote totals in terms of seats won in the last elections. But neither Hungary’s Fidesz nor Poland’s Law and Justice party were fully populist when they came into power. Striking a moderate tone during the 2015 election campaign, Law and Justice won a parliamentary majority with just 38% of the vote—a peculiar outcome for a proportional electoral system, but made possible by a fractured field of parties (all parties on the left fell short of the minimum threshold). Once in power, the party lurched back to the populist right.

Similarly, Hungary’s Fidesz was not originally on the populist right. But as the far-right Jobbik party gained support, reaching 20% of the vote in 2014, Fidesz coopted its anti-migration rhetoric (the parties may now have flipped, as Jobbik moves toward the center). Well aware of the power of electoral rules, Fidesz has even reformed Hungary’s system to its advantage, adopting a semi-proportional system similar to Germany’s that allowed it to win less than 45% of the vote but two-thirds of parliamentary seats in 2014. Now the country may be headed down the path to authoritarianism.

For supporters of the post–World War II liberal international order, this scenario, more than the performance of parties like the National Front, should be the greatest cause for concern. Barring significant further surges in support, political institutions in most Western democracies will likely keep populists from taking over through the front door, but they might just slip in through the back.

Albert Trithart is Associate Editor at the International Peace Institute.