First, it is not an ethnic-based one, despite many commentators describing the fault lines leading to violence as such and attributing conflict to political maneuvering in both Burundi and neighboring Rwanda. It is instead grounded in, and primarily remains, a domestic dispute between supporters and critics of the regime of President Pierre Nkurunziza.

Second, the fatality rate is almost three times higher than what has been commonly reported. Local level information is thus key to understanding this complicated violence.

Finally, external intervention and response has had no effect on the rate, form, or intensity of violence. These findings could help inform the ongoing international response to the violence, which currently shows no signs of abating.

Fatalities and Patterns of Conflict

Drawing on data gathered by a network of grassroots organizations and trained citizen journalists, analysis by the Armed Conflict Location and Event Data (ACLED) project illustrates how the violence and its participants are a function of political competition, often by high-ranking and “included” members of the government and opposition. ACLED’s analysis of past conflicts points to a high cost from the failure to find a political settlement in Burundi both before and after Nkurunziza’s contentious 2015 election: purges, defections, and volatility within elite circles are commonly associated with prolonged, widespread, and intractable cycles of conflict. 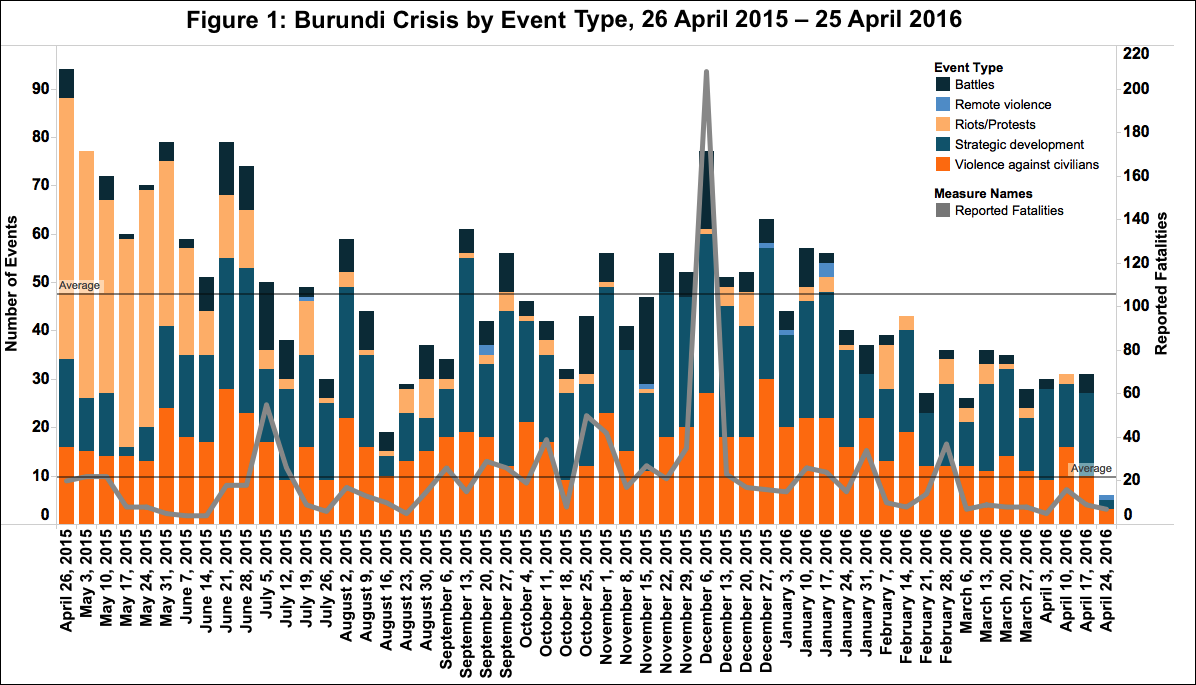 According to ACLED’s findings, the conflict saw a fatality count of 1,155 between April 16, 2015, and April 25, 2016. This is almost three times higher than the 474 people the United Nations reported dead as of March. At least 690 of the fatalities counted by ACLED (or approximately 60%) are civilians. More than 260,000 people have reportedly fled Burundi and thousands have disappeared without trace. Approximately 137,000 Burundian refugees have crossed into Tanzania, 77,000 into Rwanda, 23,000 into Uganda, and 22,000 into the Democratic Republic of the Congo. The source of UN fatality numbers is unknown, while migration numbers are based on UN High Commissioner for Refugees reports from neighboring states.

The dynamics of the conflict have stayed largely similar throughout the past year. Riots and protests made up the majority of events in the early stages of the conflict (April to early June 2015), following the announcement that Nkurunziza would run for a third term, despite a constitutional two-term limit. Peaceful protests soon subsided after this time—a function of increased violence against protesters of the regime. From June to September 2015, violent riots were common. From late 2015, “peaceful protests” have become the primary form of demonstration in Burundi, though these are almost exclusively pro-government protests over issues including the proposed deployment of African Union troops to Burundi, or citing rhetoric that is anti-Rwanda and its President Paul Kagame. Reports state that locals are forced to participate in these pro-government protests via threats from police forces and the Imbonerakure, a youth militia linked to Nkurunziza’s ruling National Council for the Defense of Democracy-Forces for the Defense of Democracy. 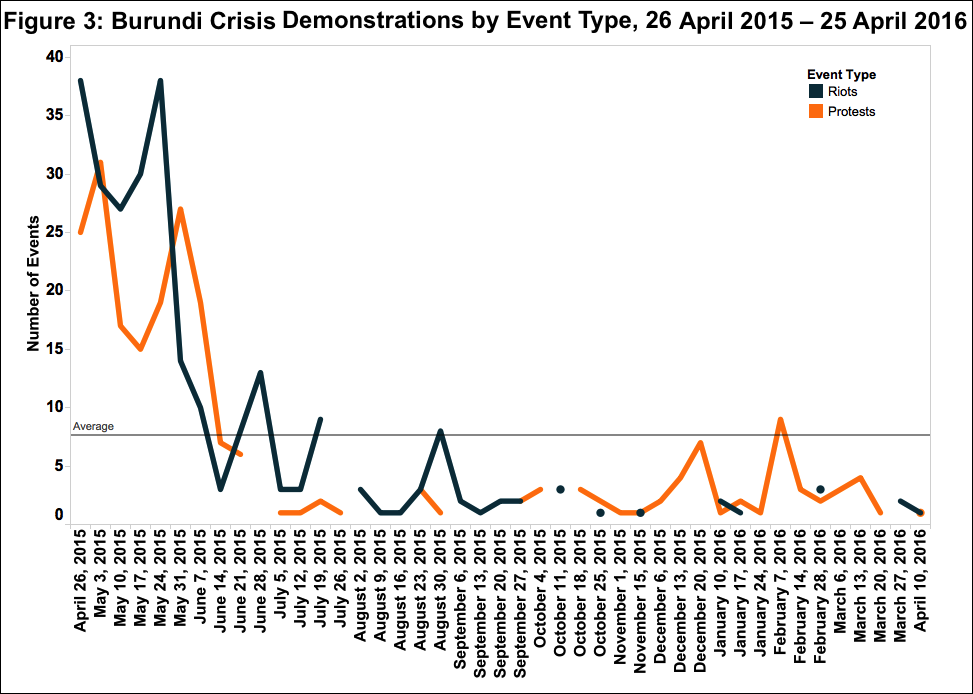 Violence against civilians has consistently comprised almost 75% of activity since last July, and has increased since the beginning of 2016. In the beginning of the crisis, attacks on civilians were centralized in and around the capital Bujumbura. In more recent periods, these attacks and civilian fatalities have become prevalent across the country. Local reporting indicates that violence against civilians has largely been carried out against opposition supporters and civilians trying to flee violence; this violence is carried out by government forces or affiliates of the government. Yet, there has also been an increased trend of military, police officials, and ruling party leaders targeted by opposition forces (including “unidentified armed groups” acting on behalf of opposition forces), as well as by other state forces in cases when individuals are deemed to be critical of the regime.

While battles comprised about a quarter of events between July and December 2015, these events have become less common. Battles largely consist of state forces, such as police or military forces, taking up arms against unidentified armed groups, which are believed to often consist of opposition supporters. However, with the crackdown of police searches of homes for weapons and opposition supporters, coupled with the increased targeting of civilians, it has become increasingly difficult for opposition supporters to openly continue taking up arms against the state. This may partially explain why a high proportion of acts involve the unidentified armed groups. It is difficult to attribute violence to just one of the numerous opposition groups active in the country. 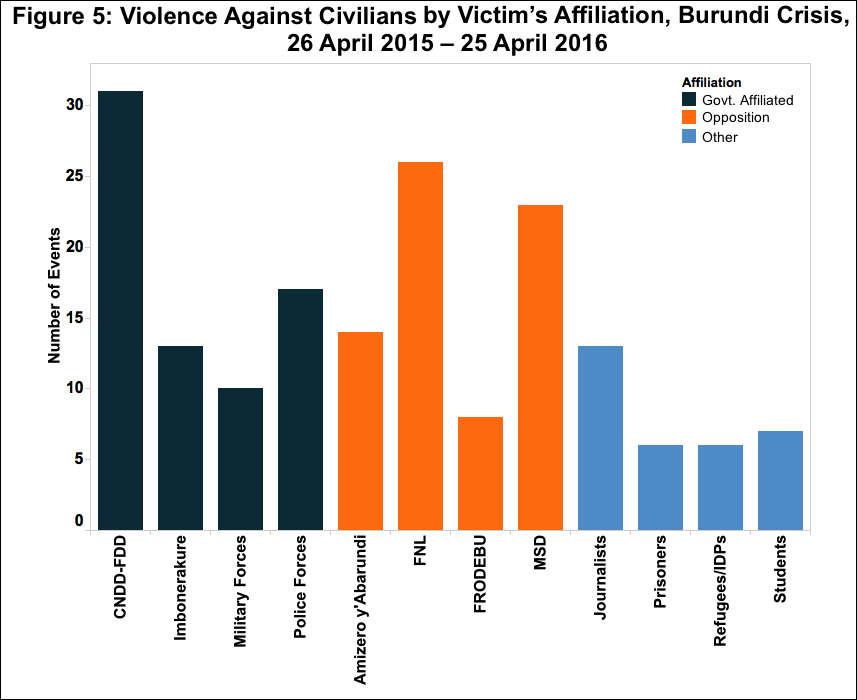 The deadliest day of the political crisis occurred on December 11, 2015, when armed groups carried out coordinated attacks on military sites in Ngagara, Musaga, and Mujejuru. At least 87 people were reportedly killed and 49 captured. Police retaliated with searches, raids, and arrests throughout Bujumbura. Dozens of civilians’ bodies were discovered in mass graves in the days and weeks afterwards. However, mass graves may not only be a tactic of government forces. On February 29, 2016, members of the press were allowed to view a mass grave in the predominantly anti-government neighborhood of Mutakura. Bujumbura Mayor Freddy Mbonimpa stated that the victims were supporters of a third term for Nzurunziza.

These last two events had significant effect on the response to the Burundi crisis. The December 11, 2015, violence garnered significant attention from international organizations, with the UN Human Rights Council unanimously backing an investigation. The AU approved the deployment of the 5,000-strong African Prevention and Protection Mission in Burundi, which has yet to be deployed due to opposition from the Nzurunziza regime. In February 2016, the government agreed to allow 100 military observers and 100 human rights observers into the country.

Despite the promised action by the AU, often-postponed peace talks mediated by Ugandan President Yoweri Museveni, a visit from UN Secretary-General Ban Ki-moon, and another by a delegation of African leaders in late February, there have yet to be tangible effects on the number of conflict events recorded in the country. Due to continued reports of acts of killing, torture, imprisonment, sexual violence, and enforced disappearances, International Criminal Court Prosecutor Fatou Bensouda announced the start of a preliminary investigation into the situation in Burundi on April 25 this year. Civilians, including internally displaced persons in camps, have to be protected from increasingly diffuse and fatal political competition. In the interim, there is a risk of government and opposition forces continuing to fragment, with possible effects on intra- and inter-group violence.

Burundi’s conflict requires serious attention for three reasons: it is a key element in overall Central African stability; it is a true test of how well post-conflict states can graduate out of repeated cycles of conflict; and it represents regime overreach and manipulation of constitutional principles, which is becoming increasingly common throughout Africa and requires a sustained response from neighboring countries and regional parties.

Clionadh Raleigh is Director of the Armed Conflict Location and Event Data project (ACLED), Roudabeh Kishi is a postdoctoral fellow at the University of Sussex, and Janet McKnight is a researcher for ACLED.

For a more thorough analysis of the first year of the Burundi Crisis, see ACLED’s full report and Burundi Crisis Local-Level Dataset.