The security climate of East Asia is changing. Last month, the Japanese Cabinet under Prime Minster Shinzo Abe approved a record defense budget of 4.98 trillion yen (42 billion USD) for fiscal year 2015. This is two percent more than last year and the third consecutive increase after more than a decade of stagnation. As of 2013, the Stockholm International Peace Research Institute (SIPRI) ranked Japan’s military spending as the world’s eighth largest.

With the country still in the economic doldrums, experiencing ballooning public debt and facing sharpening controversy over the government’s attempts at altering the war-renouncing constitution, Abe has justified the increased spending with the need to counter Chinese maritime expansion in the East and South China Seas. His government is also adamant Japan needs a stronger and more active military to contribute to the furthering of international security through “proactive pacifism.”

The move comes amid a general upward trend in regional defense expenditures. China continues to increase its spending at double-digit rates, the South Korean budget for 2015 increased 5.2 percent, and major Southeast Asian defense budgets show similar average growth rates. The United States, which has long had the strongest military presence in the region, is also looking to strengthen its posture, with President Obama’s recent budget seeking an increase of eight percent in Asia-Pacific maritime defense spending. 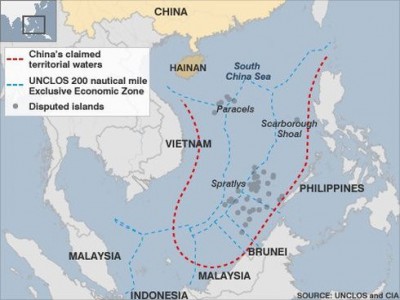 Much of this money is going into the acquisition of naval platforms such as submarines and destroyers, and enhanced maritime surveillance operations. With its ongoing arms buildup, its vast geographical presence, and its reluctance to abandon or at least clarify its idiosyncratic U-shaped or “nine-dotted line” claim in the South China Sea, China is at the center of this development. It has, therefore, become common to attribute the current militarization of the East Asian maritime sphere to the “rise of China” or the resulting power shift away from the US and its regional allies. While China’s economic prosperity and military modernization are major factors, a comparative perspective reveals that the problems that arise from East Asia’s transformations are more complex.

To begin with, officials and experts on all sides point to the need to militarily back up their claims to islands, islets, rocks, and reefs to help justify the extension of exclusive economic zones and continental shelves as far out as possible. In the quest to enclose the ocean, claimants turn to the most beneficial interpretation of the international maritime law, relying, for instance, on either the “equidistance” or “natural prolongation” principles for the delimitation of overlapping claims, depending on which offers the best advantage.

Moreover, when it comes to the resolution of disputes through adjudication or diplomatic negotiation, China, Japan, and South Korea, when in control of contentious islets, all reject the very existence of competing claims and refuse to enter official talks or proceedings. This has, for example, prompted Beijing to assert its claim to the Diaoyu/Senkaku islets in the East China Sea more strongly—a move that Japan and the US have countered with military exercises for their defense.

Last but not least, those governments with strong naval forces insist they must use these assets to protect maritime shipping routes from the Persian Gulf through the Indian and the Pacific Oceans. China, Japan, and South Korea are equally dependent on maritime transport through the Malacca Straits and therefore sit in the same boat. Nevertheless, they perceive each other as the biggest concerns. The US and Australian governments, meanwhile, are the greatest champions of freedom of navigation even though they are the least dependent on shipping through Southeast Asia.

In times when religious extremism, ethnic conflict, and economic crises are the scourge of populations around the globe, the growing propensity toward conventional interstate conflict in East Asia appears to be from another era. This is true even as Japan, under Abe, is pursuing greater engagement in the struggle against the so-called Islamic State in the Middle East.

While East Asian governments remain committed to promoting economic development and social transformation for the sake of a better future, they also seek to preserve the political status quo and hang on to the past. Stability and security have become ubiquitous catchwords and, despite the introduction of new policies under new titles, the prevailing objective is, in essence, to maintain political structures as they emerged in the 1970s, be they international, national, or domestic.

The Obama administration’s “pivot to Asia,” with its strong naval emphasis, aims to reassure long-standing allies Japan, South Korea, and Australia that the US is here to stay and demonstrate to its geopolitical challenger China—and also to itself—that American hegemony is not in decline.

Chinese leaders’ foremost concern is to continue their country’s growth at a sufficient pace to keep its society stable and fulfill the mission of leading China from the “century of humiliation” along the “road to national rejuvenation,” thus realizing the “Chinese dream” of a well-off society and enhanced international status.

For Japan’s government, especially after the “3-11” triple disaster of the earthquake, tsunami, and nuclear meltdowns of March 11, 2011—Japan’s “9/11”—it is about seeking to bring about the rebirth of the nation and restore past prosperity and international standing. There is a similar mission for South Korea and President Park Geun-hye’s administration, which has pledged to regain the country’s past economic success after grappling with economic stagnation, political scandals, and the tragic Sewol ferry sinking.

In these times of crisis and uncertainty, utopian visions of progress and prosperity have become projected into the ocean. The search for new growth engines has given rise to a gold rush mentality, with the seas seen as a treasure trove of presumably huge resource deposits.

At the same time, lone islets, rocks, and reefs have become rallying points for nationalists— many of whom have come to occupy government posts—and are used to defend views of the past and, by extension, visions for the future of their nations.

Unless East Asian and US leaders understand that what they are seeking to stabilize or defend is but one, likely out-of-date, view of the world, and start to think harder about how to rebuild local communities and render economies ecologically and socially sustainable, the current tensions are bound to increase.