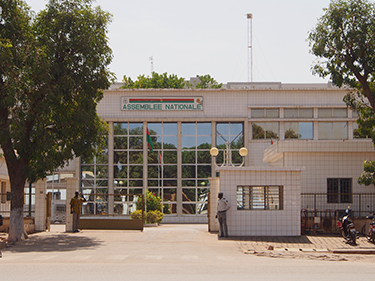 The building of the national assembly of Burkina Faso in downtown Ouagadougou, January 10, 2013. (Wikipedia)

In recent days, the world witnessed the 27-year reign of Burkina Faso’s strongman president, Blaise Compaoré, unravel in less than 72 hours. Since October 28, hundreds of thousands of Burkinabes have taken to the streets of the capital, Ouagadougou, and the city of Bobo-Dioluasso, demanding that Compaoré disband his plans to amend a clause in the Burkinabe constitution. The clause in question was Article 37—a constitutional regulation which limited the number of presidential terms a Burkinabe president could serve. By successfully amending the article, Compaoré would have been able to stand for re-election in the country’s next presidential election which was tentatively scheduled for October 2015.

But the Burkinabe citizenry was having none of it. On October 30, the day on which the Assemblée Nationale was set to a vote on a bill which could facilitate the amending of Article 37, the anti-Compaoré protest campaign reached its zenith. Thousands of protesters descended on the National Assembly in Ouagadougou, storming the venue before eventually burning it to the ground. Emboldened and determined, the demonstrators then gathered en masse at the presidential palace where they demanded the president’s removal. Less than 24 hours later, a beleaguered Compaoré would cede to their demands and formally tender his resignation.

The dissolution of the Compaoré regime was celebrated by many as a victory for democracy in Burkina Faso. Emile Pargui Paré, an official from the opposition Movement of People for Progress (MPP), went so far as to coin the event as the country’s “black spring”—a reference to the social revolution which had catalyzed similar regime changes across the Arab world. Indeed, for many Burkinabes, Article 37 was no different than the flame which set ablaze the body of Tunisian street vendor Mohammed Bouazizi—an act of self-immolation which is believed to have ignited both Tunisia’s and the wider Arab Spring. But in the case of Burkina Faso, was the article alone cause enough for revolution, or was there perhaps a change in the country’s political equilibrium which led to the fall of Africa’s quintessential strongman?

Allegations of corruption, nepotism, electoral malfeasance, and an abysmal human rights record had earned the Compaoré regime significant internal opposition. For those not subject to his rule, however, much of Compaoré’s domestic deficiencies were overshadowed by the pivotal role his regime played in responding to regional crises. Nonetheless, despite long-standing discontent with his governance, opposition to Compaoré generally manifested itself in scathing rhetoric from Burkina Faso’s divided and ineffectual political opposition—divided and ineffectual in the sense that opposition to Compaoré’s regime stemmed from a disparate group of no less than 74 political parties severely lacking financial resources, local representation, and a coherent political doctrine. In a climate of severe political fragmentation and where political allegiances regulated access to state patronage, the Burkinabe population generally tolerated Compaoré’s governance system in which democratization and repression existed simultaneously.

That said, prior to the Article 37 issue, Compaoré faced two serious civil insurrections. The first occurred in December 1998 following the alleged assassination of acclaimed investigative journalist Norbert Zongo. At the time of his death, Zongo, whose charred remains were found in a burned out vehicle outside of Ouagadougou, was investigating the unresolved death of the driver of the president’s brother and special adviser, François Compaoré. An estimated 15,000 Burkinabes attended Zongo’s funeral procession in the capital amid a climate which was described as tense and revolutionary. For the first time, Burkina Faso’s citizenry displayed publicly their dissatisfaction with a government which, at the time, was being labelled “tueur mais travailleur”—killing but hard-working. Compaoré would face a second popular uprising in February 2011 when the extrajudicial killing of a student in Ouagadougou sparked successive weeks of anti-government unrest which spread like wildfire across the country. Apart from its sheer scale and duration, the uprising was unprecedented in the fact that it included an insurrection by the Burkinabe armed forces, including those serving in the president’s Praetorian Guard.

Although both the 1998 and 2011 uprisings highlighted the vulnerabilities of the Compaoré regime, they also delineated the ineffectiveness of the country’s political opposition. In both instances, protests were somewhat disjointed, lacked discernible leadership, and failed to promulgate a central cause. Attempts by the country’s fragmented, underfunded, and politically ambiguous opposition to channel public dissatisfaction failed to bear fruition.

However, the political environment which preceded the October 2014 uprising stands in stark contrast to that which existed during previous periods of unrest. Although Compaoré’s ruling Congrès pour la Démocratie et le Progrès (CDP) continues to dominate the country’s political space, the ruling party is facing a better funded and more organized opposition. Compaoré’s respected finance minister, Zéphirin Diabré, formed the Union pour le Progrès et le Changement (UPC) in 2010 which, in less than 24 months, has asserted itself as the country’s largest opposition party. The January 2014 formation of the Mouvement du Peuple pour le Progrès (MPP), an opposition movement comprising of high-ranking and influential CDP defectors, was also poised to mount a significant challenge to the ruling party’s political monopoly.

Concomitant with a stronger political opposition, Burkina Faso has also seen the formation of a better organized, relevant, and more politically oriented civil society. In 2013, a civic movement calling itself Le Balai Citoyen (the Civic Broom) was created with a self-proclaimed mandate of “sweeping clean” Burkina Faso’s dirty political scene. According to the founders of the movement, the “tidying” of Burkina Faso could only be achieved by the removal of President Compaoré.

And that is exactly what the organization sought to do. Founded by two local musicians who disseminate their anti-Compaoré doctrine via social media, local radio, and by hosting public concerts, Balai Citoyen’s message resonated among a Burkinabe population whose median age is claimed to be 17. Perhaps in contrast to its predecessors, Burkina Faso’s invigorated opposition has noted the importance of espousing cohesion with the country’s civil society. On May 31, 2014, the MPP and Balai Citoyen held a joint rally at Ouagadougou’s Stade du 4 Août stadium calling for Compaoré to disband his plans to remove Article 37. The event filled the 35,000-capacity stadium to its rafters. Less than a month later, the CDP filled the same venue during a counter-rally, albeit amid suggestions that a large proportion of activists were bussed in from as far as Côte d’Ivoire and/or received compensation for their attendance.

From the moment that Compaoré decided to formally challenge the tenets of the Burkinabe constitution, the statesman knew he would be fighting for his political longevity. He would be well aware that the scale and intensity of protests would be reminiscent of that which shook the very foundations of his regime in 2011 and, perhaps to a lesser extent, in 1998. He would also have been cognizant that the influence he wielded over the military—long considered the guarantors of executive authority in Burkina Faso—was possibly at the nadir of his near three-decade rule.

What Compaoré may have miscalculated, however, was the balancing of a political scale which for much of his tenure had tilted heavily in his favor. Confronted by a crowd of hundreds of thousands of protesters demanding his departure, Compaoré no longer faced a disparate, disorganized, and ineffective opposition. For the first time in his long political career, the now former Burkina Faso president faced an opposition which had harnessed popular discontent and channelled it in a powerful, unified, and revolutionary voice.