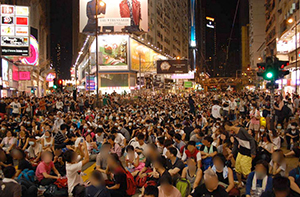 Protesters begin a sit-in on Hennessy Road, Causeway Bay, during Occupy Central with Love and Peace, September 28, 2014. Faces in the foreground have been digitally blurred. (Flickr/Citobun)

Although mass protests are not new in Hong Kong, the recent demonstrations are unprecedented in their target—directly challenging a decision of China’s National People’s Congress (NPC)—and in their objectives—free elections and resignation of Hong Kong’s Chief Executive Leung Chun-ying. So, Hong Kong joins the long list of places where citizens have resorted to mass protests to voice their grievances to the authorities that govern them. While every movement has been different, some features are common: relatively leaderless, the crowds include mainly middle-class young people, well-educated, urban, and technologically savvy, with expectation for greater agency in the way they are governed. Feeling unrepresented by political parties and politics as usual, they enlarge the political space for debate and contestation using public squares and social media. They seem more concerned by political processes, although the underlying causes often include slowing economic growth and un- or under-employment.

Hong Kong is no exception. If the trigger was Beijing’s ruling that nominees for elections in 2017 must be vetted by the Party, in contrast with what China promised at the time of the hand-over of Hong Kong from Britain in 1997, the economic context is also playing a role, with concerns among locals about costs of living, housing prices, and job opportunities. While Hong Kong’s GDP grew about 50 percent in the last ten years, median household incomes have risen by only about 10 percent. The average income of those under-40 actually dropped by more than 11 percent between 2000 and 2010, reported the Los Angeles Times.

As much has been said about the Hong Kong movement and its dynamics, this analysis focuses on three levels of questions. The first level is local: what are the future scenarios for Hong Kong? The second is national: what are the implications for China? The third set of questions concerns the consequences at the regional and global levels. For sake of clarity, I will address the three levels separately, although they are interrelated.

As for all social dynamics, forecasting is extremely hard. Some analysts have raised the specter of Tiananmen and its violent crackdown by Chinese authorities. This scenario appears unlikely, not only for the obvious reason that China today occupies a different place in the world than in 1989. “I doubt there will be a violent crackdown. Social protests have been frequent in Hong Kong, but the culture of these activities has always tended to be non-violent,” Dr. Li Mingjiang, associate professor at S. Rajaratnam School of International Studies in Singapore, told me.

The main risk of violence comes from confrontations among different citizens’ factions. This appears to be happening at the time of this writing. Some confrontations could spring from honestly frustrated citizens. Others might be the fruit of intended provocations by plainclothes agents, paid thugs, and gang members belonging to the local mafias, known as triads.

In fact, a key factor for protests to grow larger and stronger would be a shift from a mainly “white-collar” movement to a “blue-collar” movement. But that seems not to be the case so far, as Alexander Neill, an expert on China and senior fellow at IISS-Asia, has pointed out to me. The authorities’ strategy to wait out the protests seems to be working for the time being.

Although Beijing has publicly thrown its weight behind Mr. Leung and warned the demonstrators of serious consequences if they attempt to occupy government buildings, the Chinese leadership will avoid being at the forefront of the confrontation. “As far the protest focuses on Beijing’s interference in the political leadership selection process in Hong Kong, China will let the local leadership do the job,” argues Alexander Neill.

This should not be read as a sign of compromising. While China’s President Xi Jinping has cultivated a friendly populist persona to the Chinese masses, he also believes in strong leadership, and any challenge to his authority will not be tolerated. Any slight concessions, therefore, would likely come from Hong Kong’s leadership, and not from Beijing. Indeed, a local deal could be possible (for example, a certain percentage of seats on the election committee could be directly elected), as long as Beijing will not come out as compromising. In other words, this is Mr. Leung’s “mess,” and it is up to him to clean it up.

The main casualty of the protests so far is the “one country, two systems” formula. When China took back Hong Kong from Britain in 1997, Hong Kong became a “Special Administrative Region” (SAR) of China under a unique set of conditions, called “one country, two systems,” which granted the city a range of freedoms far greater than what was—and still is—allowed on the Chinese mainland. The decision taken by the NPC in August signals that Beijing cannot be trusted when it comes to this formula.

Taiwan is certainly watching with apprehension the developments in Hong Kong. The Taiwanese president Ma Ying-jeou has staked his political legacy—and probably his party’s electoral success in the next presidential race—on improving ties with China, along the lines of the “one country, two systems” formula. President Xi called the formula one of the “guiding principles in solving the Taiwan issue.” Given the current situation in Hong Kong, Xi’s remarks are not reassuring. The Sunflower Movement already showed that thousands of Taiwanese question this approach. Cross-strait relations could deteriorate, and trust on the formula will need to be rebuilt.

A second important implication is the potential impact of the Hong Kong movement on the Chinese mainland. As mentioned, Beijing’s main concern is to avoid any precedent or example for the mainland. However, Alexander Neill reminded me that “the silent minority of the 800,000 Chinese mainlanders who spend their lives on both sides of the border sympathize with the protesters in Hong Kong.” This is a main risk for Beijing’s leadership. Guangdong, the Chinese province that borders with Hong Kong, has historically been the hotbed of revolutionary spirit in China. “If pro-democracy contagion is to spread to the mainland, Guangdong would be the first to be infected,” says Neill. That is why coverage of the events in Hong Kong will continue to be suppressed in the rest of China.

A third implication for China emanates from the question of timing. Although Beijing has gradually watered down the assurances made in 1997 to Hong Kong, in some ways provoking the very resistance it wanted to avoid, the NPC ruling in August begs the question of why now. President Xi has consolidated a great deal of power, but he has no shortage of political enemies, particularly in the faction still loyal to former leader Jiang Zemin, whose members remain the main target of his anti-corruption campaign. The chairman of the NPC, the body that made the decision on Hong Kong’s elections, is Zhang Dejiang, considered a protégé of Jiang Zemin. The power struggle in Beijing might be the answer, as the Communist Party’s Central Committee will convene in Beijing in October for their annual plenum to steer the country’s political path. Anything that would make President Xi look weak or indecisive will benefit his detractors.

Both Britain and the US offered themselves as guarantors of the transition agreement in 1997. This is a responsibility they are not very keen to take today. In the eventuality of a violent crackdown by Beijing, however unlikely, both the UK and the US, along with the rest of Europe, Japan, and Australia, would not do much. Military action is out of the question, and economic sanctions would come into the picture only if the level of violence is very high. It is hard to imagine any Russian-style sanctions on China. But, the fear of sanctions works both ways, as China remembers the effect of the post-Tiananmen economic and diplomatic sanctions. Tourism revenues were down 20 percent in 1989, foreign lending reduced by 40 percent, and direct foreign investment decreased by 22 percent in the first half of 1990, although Beijing was able to protect its foreign exchange balances by imposing strict controls over imports.

Regional implications may be more relevant in the medium term. The impact on China-Taiwan relations has already been mentioned. Overall, Beijing’s volte-face on Hong Kong’s autonomy aggravates the short supply of trust in the growing Chinese power. In a region with ambivalence toward international law, creeping nationalism, and a history of grievances among neighbors, Beijing should be careful not to be seen as stoking the fire. Its behavior in Hong Kong might cast new perceptions or strengthen misperception regarding other tense regional issues, including territorial disputes with its neighbors.