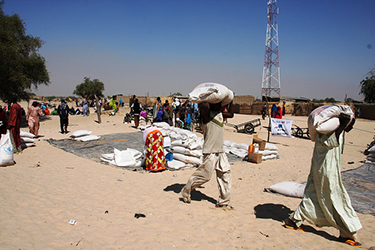 The possible release of the girls has raised hopes in Nigeria, where the conflict against Boko Haram has displaced large amounts of civilians. (EC/Anouk Delafortrie/Flickr)

Nigeria—and the world—await with bated breath credible confirmation that the government has been able to agree a lasting cease-fire deal with Boko Haram. Reports have emerged that a deal has been signed with the insurgent group which will mean the release of the 217 Chibok schoolgirls abducted in April and an end to the violence and terror which have plagued the country for more than a decade.

As the respected Nigerian journalist Simon Kolawole has written of the announcement, this will mean different things to different people. For some Nigerians, it could be an early Christmas gift. To even imagine that the insurgents or terrorists are ready to abandon their aspirations of establishing an Islamic state and establish a dialogue with the government is a huge relief.

For the soldiers forced to fight under very constrained conditions, with thousands dead—and without adequate compensation from the government—any kind of cease-fire is a welcome development. Meanwhile, the parents of the stolen girls abducted on April 14 will be hoping against hope that this is a chance they have been praying for to secure the safe return of their daughters.

Meanwhile, for many in the military and security hierarchy, a cease-fire agreement with a group of terrorists will represent something of a humiliation. After all, terrorism as waged by Boko Haram has not been criminal activity so much as all-out warfare on the Nigerian state. Boko Haram’s soldiers are “unlawful combatants” that have committed acts contrary to international humanitarian law.

The first inklings of this particular cease-fire agreement were heard on October 16 when Danladi Ahmadu, who claimed to be the “secretary-general” of Boko Haram, told the Voice of America (VOA) that an agreement had been reached between his group and the Nigerian government with the involvement of officials from Chad and Cameroon. This was subsequently confirmed by the chief of Nigeria’s defense staff Air Marshall Alex Badeh in a news conference.

But there are some credibility problems with this cease-fire agreement. First, there is huge skepticism about the identity of Danladi Ahmadu. In his VOA interview, Ahmadu even referred to Boko Haram as Boko Haram and not its real name, Jama’atu Ahlul Sunnah Lidda’awati wal Jihad.

Additionally, it is difficult to ascertain if Ahmadu is representing a particular faction of Boko Haram or the group’s mainstream leadership. Ahmad Salkida, a Nigerian journalist with proven records of contact with the leadership of Boko Haram, dented the credibility of the cease-fire and appeared to suggest that Nigeria may have been hoodwinked by the broker:

The leadership of #BH are said to be miffed that a nation of the profile and magnitude of Nigeria, with high level of intelligent people, is being easily encased in deceit and nobody seems to be asking tough questions.

Who Calls the Shots?

The problem with assessing news such as this is that it’s very difficult to pin down the various factions of Boko Haram and the tactics and ideologies employed by the various groups. In terms of religious ideology, the Yusufiya Islamic Movement (YIM), comprised of the original followers of the group’s founder Mohamed Yusuf, who was reportedly killed in 2009 in police custody, emerged to challenge the group’s new leader, Abubakar Shekau for staging a “false holy war” and introducing the concept of takfirism in order to target Muslims and non-Muslims alike.

Later in 2012, ANSARU emerged as a Boko Haram splinter, rejecting takfirism and the killing of innocent Muslims. In retaliation, Boko Haram killed the defectors and leaked details of their cells to the security forces, which led to the YIM and ANSARU becoming virtually inactive in 2012 and 2013, respectively.

A new faction led by Abu Muhammed, Muhammad Marwana, and Abu Zamira emerged in 2013, challenging Shekau’s conflict strategy of refusing to negotiate with the Nigerian government. Abu Muhammed declared a cease-fire after two meetings with the Nigerian government in Saudi Arabia in February 2013, endorsed by Marwana. In July 2013, Abu Zamira confirmed during an interview with VOA Hausa that most members of Shekau’s Council were willing to negotiate without Shekau, and in August 2013, Abu Zamira and Marwana announced that Shekau was no longer the group’s leader.

In July 2013, Marwana, with the knowledge of the Nigerian government, gleefully announced a cease-fire agreement with Boko Haram on the Hausa Service of Radio France International and sought Nigerians’ forgiveness for the sect’s violence and murders.

Meanwhile, Nigeria’s federal government set up a committee to work out the details of whether and how amnesty might be granted to members of Boko Haram and a peace deal was signed by Marwana and the Nigerian government’s minister of special duties, Alhaji Tanimu Turaki.

As we now know, far from giving peace a chance, Boko Haram actively stepped up its deadly campaign after the signing of the agreement.

Most security analysts and commentators now agree that Boko Haram, and the inability of the government of Goodluck Jonathan to defeat the group, have become major issues for the country’s elections in 2015.

It is clear that military force alone cannot defeat Boko Haram. But despite this, the Nigerian government appears to emphasize physical security through the presence of military, police, and intelligence agents, and pays minimal attention to human development issues, which are essential for sustainable national security.

Nigeria is fighting a war that its soldiers are ill-prepared for, a war made more difficult by the unconventional tactics of the insurgents and the difficult terrain of the northeastern region. But, perhaps most importantly, the Boko Haram conflict has created an independent economy that senior politicians and military officials are benefiting from in different ways—not all of them legal.

Ending the conflict will bring an end to this clandestine economy. In which case, the world will have to watch carefully to see if this latest promise will bear fruit.

Atta Barkindo is a PhD researcher at SOAS, University of London. This article first appeared on The Conversation on October 20, 2014.