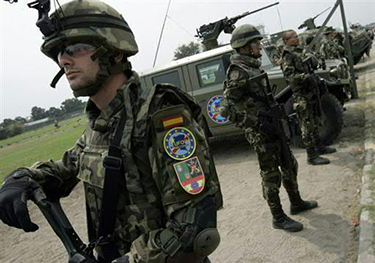 When it comes to responding to conflict, the phrase “they didn’t act fast enough” is one of the most common criticisms of international organizations. From the Rwandan genocide in the 1990s to the recent conflicts in South Sudan and the Central African Republic, swift and timely intervention by peacekeepers and other international actors can mean the difference between life and death.

Why international organizations don’t act fast enough—and why some act faster than others—is the driving question behind Heidi Hardt’s new book Time to React: The Efficiency of International Organizations in Crisis Response. In it, Hardt presents a highly original and thought-provoking argument for why organizations vary so markedly in their response times to conflict, sometimes taking upwards of a year or more to begin a peace operation in a conflict-affected country.

Time to React is welcome reading at a time when many international organizations have tried to shore up their rapid response capacity. Regional organizations in particular are frequently called upon to stabilize conflict situations, often as a stopgap measure until the arrival of United Nations peacekeepers. Several have developed rapid response mechanisms with mixed success, such as the European Union (EU) battlegroups and the African Union (AU) Standby Force.

To understand this phenomenon, Hardt goes directly to the source by interviewing the decision-makers responsible for authorizing peace operations in four regional organizations. This includes 50 ambassadors in the EU, the AU, the Organization for Security and Cooperation in Europe (OSCE), and the Organization of American States (OAS). The author also provides the first original dataset on response times by these organizations, collecting data on 61 peace operations between 1991 and 2009.

The evidence may be surprising. It turns out that the AU has the most efficient response time, with an average of 3.8 months (efficiency here is measured as the time between when an intervention is called for by the host government or the UN and when a peace operation commences on the ground). In contrast, the EU has the least efficient, taking 6 months on average. The OSCE and OAS fall in between. Why is the EU, the organization with the greatest military and financial capacity, the slowest to respond, while the underfunded African body is the opposite?

According to Hardt, the AU’s success in this area is due to its informal norms and institutional culture that enable its delegates to more effectively compromise and come to consensus. Providing ample time and space for ambassadors to negotiate in informal and off-the-record settings, such as hallways, backrooms, and dinner parties, allows them to more effectively iron out their differences and expedite the decision-making process. When it comes to quick reaction times, it’s these informal settings where the “real” work gets done.

In contrast, organizations that tie up their delegates in highly formalized and rigid structures end up limiting opportunity for informal communication. The informal nature of the AU’s Peace and Security Council is juxtaposed with that of the EU Political and Security Committee, whose proceedings are characterized as an endless series of meetings, bureaucratic dysfunction, and a “businesslike atmosphere.”

Equally important is the role of social ties and interpersonal relations, which build trust and allow for increased information sharing among ambassadors. Those organizations where the majority of ambassadors consider themselves to be friends—and even “family” in the words of one AU ambassador—correlated with faster decision-making, a process itself facilitated by informal norms. As one ambassador explained, “When you need to do business, it is much easier to talk to the person once you’ve talked about Formula 1 and football.”

One revealing case study concerns the OSCE Mission in Kosovo following that country’s declaration of independence in 2008. Serbia, which initially threatened to scuttle the mission, changed its position due to a friendship that emerged from a regular “ladies’ luncheon” between female OSCE ambassadors. The bonds forged during this informal gathering led the Serbian ambassador to push back against her capital and support the mission’s continued existence.

This example underscores the importance of both individual agency and “socialization” in international organizations. Unlike realist theorists, who suggest that ambassadors are beholden to the interests of their governments, Hardt demonstrates how ambassadors’ thinking is shaped by their capitals as well as their relations with the person sitting across the table. In other words, when it comes to international organizations, “it’s all about who you know.” This is consistent with other socialization literature, including excellent works by Séverine Autessere (Peaceland) and Ryan Goodman and Derek Jinks (Socializing States).

Although the book is geared toward an academic audience and could have been more engaging, it does well to conclude with a series of policy recommendations designed to increase efficiency. Measures include fostering norms and structures that permit greater information sharing and strengthened interpersonal relations. The phrase “African solutions for European problems” (a clever twist on the maxim “African solutions for African problems”) is put forward as a blueprint for reform.

For all this, the book’s methodology is far from air-tight. For one, the author fails to control for differences in the composition of peace operations. It seems likely that the decision to approve a robust peacekeeping mission weighs on the minds of decision-makers more heavily than that of a light-footprint mission comprised of a handful of civilian advisors. That Time to React looks only at the decision-making phase of crisis response, not the equally challenging logistical and mobilization phase, is one of its main drawbacks. Force generation is a constant challenge for international organizations, which must go door-to-door to member states asking for troops and equipment to bring to bear on the peace operation.

In addition, the assumption that rapid response is always a good thing is largely taken for granted. If a battalion of AU peacekeepers deploys in record time, but it is so poorly equipped that some soldiers do not even have rifles, then is it better to wait and muster a force that can quickly reach full operating capacity? As a result, the author’s conclusions are ultimately more persuasive than the methods she uses to get there.

But make no mistake, Hardt’s findings are useful and likely richer in their implications than she cares to discuss. What does the importance of personal ties say about the nature of decision-making, and does the UN operate by the same mechanism? Are there downsides to informal norms, such as a lack of transparency and accountability? Are the world’s foremost diplomats, as Hardt suggests, no different than “pack animals”? The fact that Time to React elicits such intriguing questions is validation of its status as a highly original and provocative book that deserves the attention of scholars and decision-makers alike.

Michael R. Snyder is a Research Assistant with the Center for Peace Operations at the International Peace Institute. He tweets at @msnydz1.