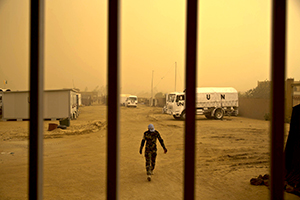 A MINUSMA peacekeeper during a training in Gao, Mali, May 15, 2014. (MINUSMA/Marco Dormino)

It has been nearly 20 months since the sound of French fighter jets filled the skies of Mali’s desert north where, on the ground below, Islamist militants had seized control of a land mass comparable to the size of France. The cacophony of fighter jet engines and their explosive arsenal marked the advent of France’s military intervention in northern Mali. Coined Operation Serval, the mandate of the counterinsurgency was to nullify the threat posed by Islamist extremists who were seeking to expand their operational footprint outside of Mali’s insurgent-battled north. An associated goal of the French military operation was to support the United Nations Multidimensional Integrated Stabilization Mission in Mali (MINUSMA) in achieving its mandate—the restoration of Mali’s constitutional order and territorial integrity.

By mid-2013, it seemed that the French military had made good on its promise. Al-Qaeda-linked groups such as al-Qaeda in the Islamic Maghreb (AQIM), Ansar Dine, and the Movement for Oneness and Jihad (MOJWA), were driven out of major urban centers that had fallen under their brutal control. The French-led operation also led to the deaths of a number of prominent jihadists, most notably Hacene Ould Khalil and Omar Ould Hamaha, who had long been sought by regional and international security agencies. In addition to ousting and neutralizing jihadist fighters, Operation Serval also curtailed militant operational capabilities. Key militant logistical and operational bases were destroyed in ground and air operations, while drug-trafficking networks, considered a significant revenue-generating industry for Sahel- and Maghreb-based terrorist groups, were similarly dismantled.

Today, however, it appears as though much of Operation Serval’s accomplishments may have been short-lived. Islamist fighters, who were thought to have been pushed to the periphery of Mali’s vast desert expanse, have announced their bloody return in a spate of attacks which have taken the form of suicide bombings, ambushes, and rocket barrages. The pre-eminence of the jihadist groups has taken a particularly heavy toll on MINUSMA peacekeepers who have since assumed the lead in securing Mali’s internal security following the partial withdrawal of their French counterparts. Indeed, since the beginning of 2014, at least 30 UN peacekeepers have been killed by suspected Islamist militants across the northern Kidal, Timbuktu, and Gao administrative regions. In one of the deadliest attacks targeting MINUSMA forces to date, nine Nigerien peacekeepers were killed after their convoy was ambushed in the Menaka-Asongo corridor on October 3. Less than a week later, a Senegalese peacekeeper was also killed after a volley of rocket-propelled grenades was fired at a UN base in the city of Kidal.

But what are the factors driving the renewed violence in northern Mali, and what can be done to address the insecurity? In answering the first question, it’s worth noting that foreign interventions in Mali were designed to combat insecurity in the country but not address the root causes. The achievement of the latter was always going to be contingent on the actions of a popularly elected government mandated with mending the country’s many socio-political and economic fractures. In this regard, the newly-elected government of President Ibrahim Boubacar Keita has simply not come to the party. On the contrary, the incumbent Malian regime may be succumbing to the same bad habits of its predecessors.

Over a year into its tenure, the Keita regime has already been accused of engaging in corrupt practices and nepotism, and is lacking accountability and transparency. A stark example of this was Keita’s recent acquisition of a private jet costing an estimated 40 million USD. The aircraft was purchased at a time when the beleaguered Malian military itself had no aircraft at its disposal and an estimated 1.4 million Malians were said by the UN to be in need of food assistance.

The incident came just months after the International Monetary Fund (IMF) questioned Keita’s award of a no-bid defense contract, worth an estimated USD 136 million, to his friend and personally appointed adviser, Sidi Mohammed Kagnassi. While the deal itself did not contravene legislation governing defense-related purchases, subsequent IMF investigations into the matter would indicate that the majority of the contract would foot the bill for non-military items. While such malfeasance may not directly translate into insecurity, it will only serve to foster popular resentment against state authority, which many non-state groups benefit from.

Concerns have also been raised about Keita reverting to a clientelist approach in addressing insecurity in the north. During the country’s November 2013 legislative elections, Keita’s ruling Rally for Mali party conspicuously backed several northern candidates who formed part of, or who were linked to, a number of active Arab and Tuareg armed groups. Keita’s provision of political support to these individuals could translate into placating these armed groups opposed to his government. Such a strategy has habitually been employed as a means of attaining short-term stability in Mali’s volatile north. However, it has often been done so at the expense of long-term cohesion and inclusiveness intrinsic to the consolidation of a binding peace. As recently argued by the International Crisis Group in a publication entitled “Mali: Reform or Relapse,” the adoption of a clientelist approach as the panacea to the insecurity in northern Mali will only deepen tensions between non-state groups, thereby increasing the risk of new splinter groups taking up arms.

But while state reform (or perhaps the lack thereof) serves as an explanation for the marked increase in violence in northern Mali, the international community can also not entirely be absolved from blame. For one, the decision by the French government to reduce the scope of its Malian counterinsurgency operations may have been premature. Although Operation Serval had dealt significant blows to the logistical and operational capabilities of several militant groups, it was evident that non-state factions targeted were not entirely defeated. Indeed, the fact that France on several occasions delayed its planned withdrawal was perhaps indicative of the tenuous security climate which was again prevailing across Mali’s desert north.

The inevitable void which has accompanied the French withdrawal from northern Mali is simply not being filled by MINUSMA. While the peacekeeping mission has established a presence in several northern towns and settlements, a lack of human and logistical resources, particularly that of aerial capabilities, is severely hampering its effectiveness. Its deficiencies are also unlikely to be resolved in the interim. On October 14, incumbent MINUSMA head, Bert Koenders, confirmed his resignation from the mission. The loss of Koenders, who has been appointed the Netherlands’ Minister of Foreign Affairs, can only be described as a significant setback to the optimal functioning of the UN mission.

Furthermore, MINUSMA’s multifaceted and complex mandate—perhaps a microcosm of the context in which the mission is operating—is also proving to be problematic. MINUSMA has been tasked with re-establishing government authority in a region of Mali where it has never existed. It also has to achieve this goal without being perceived as an extension of the Malian security apparatus and/or being partial to any of the armed stakeholders upon which the Bamako influence in the region has and continues to be dependent. In short, the achievement of some of MINUSMA’s short-term goals is proving to be incongruent with the attainment of others.

Finally, insecurity in northern Mali can also be described as being rooted in regional as opposed to a solely domestic quagmire. Although the primary drivers of violence are groups who occupied the country’s north following the March 2012 coup, these entities remain transnational as opposed to intrinsically Mali-based actors. Consequently, counterinsurgency operations that have weakened these groups in Mali have failed to nullify their capabilities in neighboring countries where they continue to operate with limited restrictions.

The recognition that Mali’s internal security is subject to prevailing geopolitical conditions perhaps explains why France chose to cease the Mali-centric Operation Serval for its wider-reaching successor, Operation Barkhane. Named after a crescent-shaped dune in the Sahara Desert, Operation Barkhane has seen the French government deploy a 3,000-strong counterterrorism force in Burkina Faso, Chad, Mali, Mauritania, and Niger. Still in its early stages, the counterterrorism operation has already highlighted the pivotal role it will play in shaping Mali’s security outlook; on October 10, French authorities confirmed that they had destroyed a multi-vehicle convoy in northern Niger which had originated from neighboring Libya. (The French government further stated that the convoy was transporting weaponry and other equipment to AQIM operatives in northern Mali).

A degree of stability has returned to Mali, but it is becoming evident that the country faces myriad challenges. If not addressed adequately, these could compromise its recent progress. While efforts should undoubtedly focus on countering prevailing security threats, decisions and policies implemented should concomitantly respond to the causes of such insecurity and not just their symptoms. From a government perspective, the focus should be on nation-building, which can only be achieved by creating governance structures that are deemed to be accountable, transparent, and inclusive. The adoption of a clientelist approach, while pragmatic in securing short-term peace, may achieve this at the expense of long-term stability. Such a strategy should consequently be avoided.

From an international perspective, it is simple: more has to be done to equip MINUSMA with the resources it needs to carry out its mandate. In light of a partial French withdrawal and a deficient Malian army, the UN peacekeeping mission has become the primary guarantor of Mali’s domestic security. If the mission is unable to achieve its goals, even a reformed government would face an uphill battle in building an inclusive and stable Malian state.