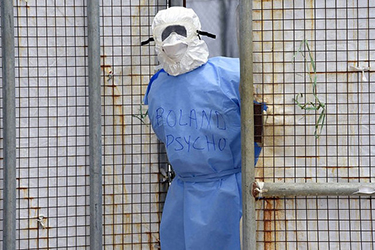 On October 23, the West African nation of Mali announced its first case of Ebola—a two-year-old girl, who tragically died the following day. The World Health Organization (WHO) considers the case an emergency because the girl’s journey from Guinea to Mali “presented multiple opportunities for exposures—including high-risk exposures—involving many people.” Malian authorities are currently monitoring 43 people, including ten medical workers, for symptoms of the virus.

As the potential outbreak in Mali shows, Ebola is, and has always been, a challenge for West Africa as a whole. Although Senegal and Nigeria have defeated outbreaks of the disease, the interconnected nature of West African societies and economies means that Ebola will almost certainly continue to cross borders. A regional problem, Ebola will increasingly require a regional response. West African powers, particularly its top economies Nigeria, Ghana, and Côte d’Ivoire, along with the regional bloc of the Economic Community of West African States (ECOWAS), have an interest in quashing the entire outbreak. Beyond keeping West Africans safe from the disease, regional powers also have an interest in halting the damaging effect of the virus on the region’s economy. Finally, West Africa has an interest in preventing any further deterioration of state-society relations in the three most affected countries: Liberia, Guinea, and Sierra Leone.

The examples of Senegal and Nigeria demonstrate that West African nations can defeat small outbreaks. National Geographic has derived four lessons from these experiences: authorities must isolate patients and trace contacts; detect cases early; show strong leadership; and build public trust. There is some luck involved, particularly with early detection, but preparation is key. Senegal and Nigeria anticipated cases and responded swiftly.

One could add a fifth lesson from the experiences in Senegal and Nigeria: Ebola does not respect borders, and so West African nations will be best protected by working together. Yet non-affected countries have mostly focused, so far, on protecting themselves. Côte d’Ivoire, Senegal, and Guinea-Bissau have closed their land borders with the affected countries, a measure the WHO calls unproductive.

Some countries have taken steps toward regional coordination. Nigeria recently announced that it would send 600 volunteers to fight Ebola in the affected countries. Responding to pressure from the African Union (AU), African countries from other parts of the continent have also pledged volunteers—over 600 from East African countries, and over 1,000 from the Democratic Republic of the Congo. Sending medical personnel to the outbreak’s epicenter is one of the best ways to fight the disease, because experts estimate that only when 70 percent of cases are isolated can the outbreak be halted. That objective will require a massive effort.

Ghana has made a major contribution by serving as a logistical hub for the response. Ghana hosts the United Nations’ regional center for fighting Ebola. In an important gesture of solidarity, Ghana’s President (and ECOWAS Chairman) John Mahama visited Liberia, Sierra Leone, and Guinea in September, and he has called for lifting counterproductive travel restrictions against West African countries—restrictions that can harm economies and inhibit the movement of foreign health workers whose contributions are essential to defeating the outbreak at its source.

Despite Mahama’s personal efforts, ECOWAS as an organization is facing a major test. In July, ECOWAS pledged to create a 10 million USD Special Fund for the Fight against Ebola. ECOWAS has not, however, been able to align the strategies of different countries in the region—a critical challenge given how tempting and politically popular it can be for countries to close borders, and how difficult it can be to build public trust and send resources to the heart of the outbreak. Turning commitments of money and volunteers into concrete action will be another challenge, and one that will require energetic commitment from ECOWAS.

A more difficult problem for ECOWAS, Nigeria, Ghana, Côte d’Ivoire and other regional stakeholders will be mitigating the outbreak’s long-term impact on the region. As Selase Kove-Seyram and others point out, Ebola is already doing significant economic harm, slowing commerce in Côte d’Ivoire and elsewhere, preventing travel, and leading to cancellations of major events. The immediate economic damage—an estimated 359 million USD in losses this year for the three most-affected countries—will be followed by long-term effects, including investor flight and declining tax revenues.

Most frighteningly, the Ebola outbreak is hurting agriculture, while border closures are preventing the movement of goods. The agricultural shock sets up the affected countries—and the region as a whole—for a food crisis. These interlocking economic problems could add to the undermining effect that the Ebola crisis is having on governance. In other words, even after the outbreak ends, West Africa will be grappling with the outbreak’s economic and political effects for years to come. It does not appear that West African leaders or their international partners have begun making serious preparations for those challenges.

As West Africa responds to Ebola, the African Union is also playing a role—and facing criticism. AU Commission Chair Nkosazana Dlamini-Zuma visited the most affected countries last week. In September, the AU began training teams of medical workers to deploy to West Africa under its AU Support to Ebola Outbreak in West Africa mission. Yet some commentators have criticized the AU’s response as slow and inadequate. As with ECOWAS, the AU will face a test in coordinating recent offers of help from different countries on the continent.

Many scholars of Africa, as well as Africans themselves, have expressed concerns over media portrayals of Ebola as an “African disease.” These portrayals have helped fuel panic in the United States and elsewhere, resulting in nonsensical and cruel incidents such as a New Jersey school’s decision to bar two Ebola-free Rwandan students from attending classes. Yet even if Ebola is not an African disease, the current outbreak is and will long remain a West African problem, one that will require a coordinated, long-term solution.