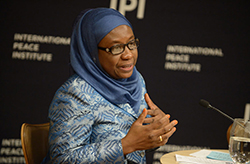 Gaps in accountability, immunity for African heads of state, and threats from extremist groups are a few of the topics covered in this Q&A with Aisha Abdullahi, the African Union (AU) commissioner for the Department of Political Affairs, where she discusses what roles the African Union, the regional economic communities, and civil society have.

The African Union has adopted a number of normative frameworks that enshrine the values of accountable and democratic governance. Yet there seems to be an implementation deficit, a gap, regarding these norms in many African countries. So, how does the African Union hope to bridge this gap?

It’s true. We have a lot of normative instruments, and every day we churn out new ones—during the last summit, my department alone had two new instruments adopted by the union.

But we see these just as a first step. When we get our member states to sign and ratify, it shouldn’t just end there. The implementation for us is key.

For 51 years now, Africa had had this continental organization, which was known as the OAU and which has now become the AU. Last year, during the 50th anniversary, we didn’t just celebrate—we used the period to look at ourselves, how well we are doing. Yes, we have done very well in terms of decolonization; yes, we have taken steps to promote our unity and integration. But still, the continent is faced with a lot of serious governance deficits and, consequently, our leaders during the 50th anniversary made a declaration, which was signed by all the 54 African leaders—it’s like a renewed commitment. And also, the theme for the year was pan-Africanism and African Renaissance. We used the whole year, until May 2014, to do activities and ignite the flame of pan-Africanism, but also to discuss seriously the African Renaissance.

And what came out of that is what we call the Agenda 2063 document. It’s still a work in progress because we don’t want the document to just be a government-promoted or a government-designed agenda, but something that’s owned by the people. So it’s going through a lot of consultations, through a lot of reviews by all the stakeholders, civil society, the private sector, think tanks. Everybody has to contribute to the agenda so that at the end there would be ownership. So this is how we intend to make sure that our leaders also are complying.

Most of our instruments have implementation mechanisms in them. For example, the African Charter on Democracy Elections and Governance stipulated that after two years of its coming into force there shall be what we call state reporting. The document came into force in 2012, so from 2014 to date, we are working on the implementation, and we are trying to ensure this state reporting.

When we sat with all our member states, what we came to realize is that yes, they have signed, they have ratified, but they need to be assisted technically on how to implement the requirements of this instrument. And that’s now what we are working on.

There may be some degree of disconnect, but I would say that it’s not a deep disconnect. Increasingly, the African citizenry is having its voice heard unlike what we had before. It’s not perfect yet, but we are getting there. And whatever we do now as a union, we don’t just involve our regional economic communities, but all the organs of the union, like the pan-African Parliament, which represents the voice of the people. We also have the African Commission on Human and Peoples Rights in Banjul, where people go and speak out and take on governments.

We have African courts, whose jurisdiction has now been expanded to also cover other cases, including corruption cases. So this is the way the union is going, and we shall get there to bridge that gap of that disconnect.

We also have ECOSOC—that’s the civil society organ of the union. It’s getting increasingly active; and we do this also with our citizens in the diaspora, and we have many of them all over the world.

The African Union recently approved a provision at the African Court of Justice and Human Rights which grants immunity to sitting heads of state and senior government officials for crimes against humanity and the other crimes that are spelled out in Article 4H of the constitutive act—war crimes, and genocide. Is this a step back in your view in the fight against impunity on the continent? What are your thoughts on this?

The issue of immunity for sitting serving leaders is not unique to the African continent. Most countries grant immunity to their serving leaders. It’s not peculiar to us.

But on the other hand, as we do this, we also try to promote accountability among our leaders. Increasingly, our parliaments are having a louder say in governance. We’re increasingly promoting decentralization and local governance. So these are all bits to bridge the gap.

But I don’t see it as something that is a step backwards. It’s more like the norm with most countries and places in the world. It’s not peculiar to the African continent.

The African continent has seen a rise in the threat of extremist groups such as Boko Haram in Nigeria and Cameroon, and al-Shabaab in East Africa. How can the African Union address and mitigate the growth of radicalism and the appeal to young men in particular and address the root problems such as bad governance and poverty that seem to underlie the appeal of these radical groups?

About two weeks ago, the African Union had a summit of the Peace and Security Council at the level of heads of state, and the theme was counterterrorism. The outcome of that meeting clearly indicates that for Africa to counter terrorism, it has to be a multidimensional, multi-sectoral approach. Africa has to address the root causes of conflict and crisis, promoting good governance, ensuring gender and youth empowerment, promoting inclusivity, and addressing the issues of human rights.

For us to really counter terrorism on the African continent, we have to also tackle the issue of unemployment. Over 65 percent of the African population is below the age of 35. These youths mostly do not have jobs and they need to go to school, and when we make them go to school and they come out, it should be a meaningful education, and not just for them to queue up for government jobs or civil service, but also to promote the quality of leadership on the continent.