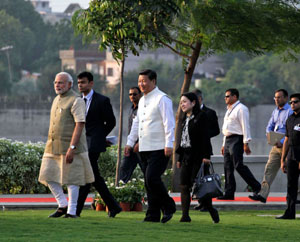 Today, Chinese President Xi Jinping began his first official visit to India. The visit comes against a backdrop of increased efforts by India’s newly elected Prime Minister Narendra Modi to boost ties with regional partners and is expected to reaffirm the two countries’ commitment to shared trade ties. The visit is also expected to address a delicate border dispute in the western and eastern Himalayas, which India and China have grappled with since the 1962 Sino-Indian War.

On September 15, I sat down with India’s former Permanent Representative to the UN Hardeep Singh Puri to discuss the upcoming visit. Ambassador Puri, who is now a Non-Resident Senior Adviser at the International Peace Institute and a member of the ruling Bharatiya Janata Party, acknowledged the need for settling the border dispute, and pointed to how the current positive mood in both capitals could lead to the establishment of one of the most important relationships of the 21st century. What follows is a condensed and edited version of our conversation.

What is the significance of this visit?

The visit’s significance should not be assessed in terms of the fact that it is taking place, but what it could lead to. There has been a lot of high-level contact between India and China as of late. Both the visiting Chinese dignitary and Prime Minister Narendra Modi were together in Fortaleza for the BRICS summit; and when Mr. Modi was elected, the Chinese president sent his foreign minister as a special envoy. So there is no shortage of contact.

Now, the mainstream opinion is that both India and China want the visit to be a resounding success in order to open a new chapter in Sino-Indian relations. Also, Mr. Modi has been an admirer of China in terms of its economic prowess, and in terms of the success it has registered in the manufacturing sector. I think what we are looking at is an intensification of Sino-Indian trade by multipliers and massive Chinese investment in India. The relationship is developing a momentum that could turn it into one of the most important and defining relationships by the middle of the 21st century.

You mentioned that the visit could lead to a new chapter. Are the two countries trying to mend relations in some way?

The relationship hasn’t been entirely easy. The border dispute is still a problem, but the strong leadership that we see in both countries now makes the resolution of the dispute more likely.

It is no secret that many of China’s neighbors, India included, sometimes agonize about the direction of Chinese policy, especially now that it appears to be in a more robust muscle-flexing mood.  That means that it is all the more important for China’s neighbors, particularly India, to engage China. And engagement has to be comprehensive, both in terms of outstanding issues, but also in order to get a game-changing relationship, one that can focus on the positive aspects.

Now, the model adopted until now has been one of setting aside difficult issues while trying to work on all the other issues. Well, it’s entirely up to the new government in India to see whether they want to persist with that model, or if they want to recalibrate or tweak it. If you look at this week’s visit from India’s point of view, I think India wants a far more meaningful and game-changing relationship with China, and I would like to believe that China shares that objective. And I think that is achievable.

So would you say the two countries are planning to replace the old model?

Well, we will still try to work on economic and commercial interactions while simultaneously working on the border issue. Although the border issue hasn’t been completely put on the back burner—since 1986, there have been 17 rounds of discussions—the current model appears to have a visible problem with it. If your bilateral trade is increasing to, say, 70 billion USD, and it has the potential of going beyond that, but you have border incursions, then you’re damaging that potential gain.

Those border incursions then get played up in the domestic press on both sides—whoever is at fault—feeding into the machinations of those who want to project the relationship as being problematic. Of course, there are problems, but it is important that any difference of perception be rectified, and for maps to be exchanged and then for us to work in a concerted manner.

In a recent op-ed, Kishore Mahbubani labeled the last 200 years of Euro-American economic dominance an “aberration.” What do you think of that?

What Professor Mahbubani—whom I know very well, and respect very much—talks about is India and China’s economic dominance up until 1820, which was later replaced by “Western” economic ascendancy.

Now, it’s not very difficult to see why that happened. If you look at India prior to independence in 1947, we had 190 years of British colonial rule. In 1850, India was one of the world’s leading economies, but then the terms of economic interaction became classically colonial. These are the flows of historical forces. And I think that what Mr. Mahbubani is saying is that if India can manage its own economic trajectory—in which he places the relationship with China as an important component—then India could end up in a situation in which it could take advantage of the positive win-win relationship with Beijing.

In economic terms, what would you say brings the two countries close to each other?

You know, if India grows at eight percent over the next 15 years, it will be the world’s second largest economy in PPP [purchasing power parity] terms. And one of China’s remarkable developments has been its ability to lift a very large section of its population out of the poverty line.  So I think that is the same kind of approach that could lift India and the hundreds of millions of people who are still below the poverty line.

All of China’s neighbors have a certain degree of concern. All of them. That includes India, but also Japan, Vietnam, the Philippines. I think it will be necessary for China to address these concerns. The perceptions of each of these problems is different. Insofar as Japan is concerned, those are issues that can be traced back to what happened during the Second World War, or territorial disputes, such as the islands.

Most of these issues are emotionally charged, and one can’t utilize the same brush insofar as all these relationships are concerned. In India’s case, there are other issues that cater to popular perception. There is the territory that, in India’s view, was illegally ceded by Pakistan to China; and there’s China’s role in what India calls the Pakistan-occupied Kashmir. There are people in India who will talk about China’s encirclement of India in what is called the “string of pearls.” You may agree with it or not, but these are perceptions, and perceptions are very important in a democratic country. That means that in India, we’ll have to play the perceptions game with great care.