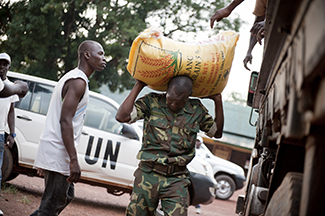 September 15 will mark the beginning of the latest peacekeeping intervention led by the United Nations, when blue helmets take over from African Union forces in the Central African Republic (CAR). Since 1997 there have been 13 regional and international peacekeeping operations deployed to end violence, disarm combatants, and restore peace in CAR. As the UN launches yet another mission, it is clear that none of the previous interventions was able to address the root causes of the country’s instability, which range from fractured and predatory state structures to deep-seated feelings of marginalization in some communities, particularly where public administration has been historically weak.

The latest cycle of conflict in CAR was triggered by the violent overthrow of President Bozizé in March 2013, carried out by the Seleka—a group composed mainly of CAR Muslims and also supported by foreign armed elements from neighboring Chad and Sudan. (International and regional actors’ meddling in CAR’s internal affairs has also been a persistent contributor to the country’s instability). The Seleka leader Michel Djotodia appointed himself head of state upon overthrowing his predecessor, and the situation deteriorated considerably.

As a result of Seleka abuses against the Christian population, local self-defense forces known as the anti-Balaka were created, primarily comprising unemployed youth and elements of the national army. With the ex-Seleka and anti-Balaka clashing throughout CAR, the country descended into a vicious cycle of attacks and reprisals resulting in grave human rights violations on both sides and mass displacement of the population.

As Mr. Djotodia proved unable to reduce the violence, the UN authorized international forces to deploy to CAR. The African Union International Support Mission for the Central African Republic (MISCA) deployed in December 2013; France also launched Operation Sangaris during this time to assist MISCA in re-establishing law and order. Mr. Djotodia was removed from his position by regional actors in January 2014, and members of CAR’s National Transitional Council elected Catherine Samba-Panza as interim president in his place.

The AU and French missions lacked the appropriate tools and personnel to address the political and humanitarian dimensions of the conflict, however, and the situation continued to deteriorate. France advocated for a UN multidimensional operation which it felt would be better suited to address the crisis. The Security Council established the United Nations Multidimensional Integrated Stabilization Mission in the Central African Republic (MINUSCA) in April this year and called for MISCA to transfer authority to MINUSCA on September 15.

On paper, MINUSCA is poised to help address some of the underlying factors that have contributed to instability in CAR for so long. The new mission is mandated to provide support for the transition process; facilitate humanitarian assistance; promote and protect human rights; provide support for justice and the rule of law; and assist state authorities to conduct free, fair, transparent, and inclusive elections, as well as disarmament, demobilization, reintegration, and repatriation processes. In areas where national security forces are not present, the mission will adopt “urgent temporary measures” to maintain law and order and supplement the national police. Additional tasks include supporting security sector reform and preventing armed groups from exploiting natural resources.

In practice, three critical challenges are likely to hinder the timely implementation of MINUSCA’s mandate: delays in political and reconciliation efforts, resistance from armed groups, and the lack of institutional reform.

Insufficient progress in the political and reconciliation processes underway could adversely affect implementation of the mission’s mandate. Already, as interim president with no national constituency from which to derive legitimacy, Ms. Samba-Panza has had a challenging time building momentum for national reconciliation processes and working with political actors. Nothing highlights this more clearly than the recent change in government, which has not mitigated the distrust between political actors and communities. As such, Ms. Samba-Panza is likely to remain a nominal figurehead until presidential and legislative elections take place, which are tentatively planned for February 2015.  If she cannot build political consensus within CAR she will also continue to lose her already tenuous legitimacy with regional heads of state.

The recent peace forum held in Brazzaville in July and attended by delegates of various CAR political groups resulted in a cessation of hostilities agreement that has been largely ignored by armed groups. If the UN mission and its partners cannot obtain a durable ceasefire from the political parties and armed groups, displaced populations will not return. This, in turn, will affect the holding of transparent and inclusive elections. Once a real ceasefire is reached, the mission should put pressure on political actors to modify the Libreville 2008 agreement and use it as a roadmap to re-establish and extend state authority in CAR.

More broadly, the mission will need to create an environment that is conducive to inclusive politics and political dialogue and that is not influenced by heavily armed foreign elements. At the regional level, it will be well placed to coordinate regional peacebuilding initiatives with the Economic Community of Central African States, helping to bind Central African states together by promoting shared goals and interests.

The second major stumbling block for MINUSCA would be a continued deterioration in the security situation caused by heavily armed groups, particularly in the north and east of the country. In this scenario, protection of civilians and humanitarian assistance are likely to be limited, and the country will continue on a path of insecurity and de facto partition along religious lines. Marshalling troops and specialized personnel to support MINUSCA has been particularly challenging, and if the required troop levels and air assets are not deployed in the next six months, the mission will have a difficult time implementing its mandate in this respect.

In the short term, the mission will need to prepare for immediate challenges from armed groups that are profiting from the state of lawlessness and violence. In the long term, these armed groups will only be demobilized through a comprehensive political process that is supported by regional actors. The mission will also need to work with international partners to develop the Central African Republic’s own army and police capacities to ensure that they are able to maintain law and order across the country. In parallel, it will need to help develop local-level conflict resolution mechanisms that resolve and mitigate conflicts at the grassroots.

Finally, the disintegration of CAR’s state institutions—particularly the judiciary—is both a key factor in the country’s continual insecurity and a real risk for MINUSCA if left unaddressed. If there is not a sustained transformation of state institutions into legitimate, capable, and accountable entities that can deliver basic services (particularly jobs) and provide civilian protection throughout the country, then MINUSCA will not have the credible local partners required to build peace.

As such, the UN mission will need to help resuscitate state and national institutions throughout the country, not least the judiciary, local governance bodies, and law enforcement. Providing the foundation for greater accountability and transparency in the extraction of natural resources in particular will also go a long way toward preventing future cycles of violence and building a durable peace.

Avoiding the Pitfalls of the Past

As the 13 previous interventions can attest to, half measures in CAR do not lead to sustainable peace; short-term and poorly funded interventions that do not address the underlying factors of the conflict are doomed to fail. Only long-term peacebuilding can restore a semblance of order and normality in CAR.

To successfully reduce the violence, MINUSCA will have to ensure that the international community is committed to the creation of a democratically elected government in CAR that is broadly representative and inclusive, even while recognizing the destabilizing risks inherent in such an undertaking in the absence of viable state institutions. The mission and its partners will need to ensure that the national police and army are rebuilt, reformed, and mentored to respect human rights and address impunity. And it will need to robustly support national reconciliation efforts to help arrest the de facto partition in the north and lay the foundations for a less elusive peace.

This is a tall order for a peacekeeping operation saddled with a standard stabilization and securitization mandate in a country where past interventions have seen so little success. To avoid the pitfalls of the past, the international community as a whole will need to offer this mission continuous and long-term support.

Lamii Moivi Kromah is a Research Fellow at the International Peace Institute’s Center for Peace Operations.