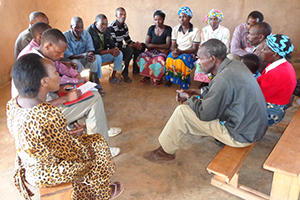 A group in northern Rwanda uses community-based sociotherapy to bridge deep rifts created by the 1994 genocide. (Insight on Conflict)

Despite so many efforts to make internationally designed peacebuilding and development projects sustainable after the outsiders have left, international NGOs and donors still struggle to realize the goal of “local ownership” in practice. Now, a new approach called “local first,” led by the UK-based organization Peace Direct, aims to go beyond efforts to merely transfer ownership of a program to a local organization—it seeks to put local people in the lead.

Carolyn Hayman, chief executive of Peace Direct, spoke to the Global Observatory about what this means in practice, how it can deliver powerful results, and how international donors and peacebuilding organizations can adapt. What follows is an edited version of the interview, conducted by Andrea Ó Súilleabháin, policy analyst at the International Peace Institute.

What is a “local first” approach?

What is the difference between locally led, locally owned, and locally delivered peace and development programs? Why does this distinction matter?

We came to this because we realized that everyone works with locals—nobody says they don’t work with locals. But what does that really mean? There’s a lot of talk about “local ownership,” which is where the idea or the impetus for a program may come from outside, but there is a determined effort to transfer that ownership to the local participant—so that at the end of the time period the externals can withdraw knowing that the program will continue.

An example of that would be the UK organization Camfed, which works on girls’ education in different countries and has a well worked-out model that involves lots of volunteering at different levels—for example, in parent-teacher associations or in committees that decide which girls get the scholarships. So they may bring the model into a country, it may be adopted, but when they leave, there will be thousands of people volunteering in these different defined roles.

In fact, what we mainly see is what we’ve called locally delivered or locally implemented programs, which is where a donor has an idea, they put out a tender, an international organization will contract to get the tender, and then they look around for a local organization to actually deliver the program. But that organization will have had little or no input into what issue is being addressed and how it should be addressed.

But to us, the really important thing is local leadership. That means that local people decide which issues are the ones that need to be addressed and come up with their own ways of addressing them, and external actors are there to provide support, resources, and know-how if asked for. But local people are in the lead.

What challenges do international actors face in adopting a local-first approach?

There are four issues which came up most often when we were talking to donors and international NGOs about local-first principles. The first was, how do you find and how do you evaluate local capacity when you’re talking about not just the capacity to deliver a donor’s project—which is what we generally tend to focus on—but really the more important capacity to liberate the community’s potential for working together to solve problems?

The second theme is, how do you have a genuine dialogue about what problems are the most important ones to address and how should those be addressed so that local ideas are really at the heart of the program?

The third issue is, how do you fund local organizations in a way that supports and strengthens them rather than destroys them?

And finally, how can you bring people together to operate at a larger scale in order to meet donors’ expectations that large-scale programs require large-scale solutions?

You mentioned the importance of liberating the community’s potential to work together to solve problems. What do you mean by this?

I’ll give you an example from Sri Lanka. It’s great that you get young people from the Tamil and Sinhala communities coming together playing football or doing photography or whatever it is. But then what I think is really powerful is when people see those young people involved in early warning and dispute resolution. So they can see that it’s not just about understanding each other so that we’re not quarrelling; it’s actually about understanding each other and then jointly being motivated to provide a service to the community. And I think often those services are particularly powerful when they are delivered by disparate groups.

One of our partners in the Philippines, their program places Muslim volunteers in Christian organizations. So the first result is that Christians understand that Muslims don’t have horns and tails and that they’re actually perfectly normal people. But the second result is that, with that Muslim volunteer the organizations can then deliver their services in Muslim communities. So it’s no longer the case that only the Christian community gets the benefit of water and sanitation. And therefore you’re removing a potential source of conflict.

Do donors and peacebuilding organizations also need to take a different view of measuring results?

One of the models that we looked at had this interesting distinction between tangible and intangible results. This was the model for Myanmar, where volunteers were placed in communities or were recruited to work within their own communities to mobilize the community to come together, define problems, find solutions, and then implement the solutions. And the evaluation counted the tangible results in terms of initiatives that were launched, the results for those initiatives, and how many people got involved with them.

But the biggest impacts were actually the intangible results, which were things like the communities’ self-belief in their power to create change, the development of trust, and the increasing range of relationships with government entities and other kinds of actors that they hadn’t previously access to.

You have written that after a period of decreasing conflict in the world, today there seems to be an increase in conflict and a return to war in several countries. How can the international community respond to this troubling trend?

One of the things that motivated me to set up Peace Direct was that, as a Quaker, I’ve been endlessly sitting and meeting for worship with people, getting up and ministering about how bad the situation is in one country or another. And I always think, now is not the time to act, because we should have done something 10 or 20 years earlier. So I think that we need to really have more faith in the value of preventive action. Donors are so skeptical about anything that doesn’t deal with a fire that’s already burning, and yet we know that an ounce of prevention costs hundredths of what it takes to cure.

So I would like to see donors treating preventive action almost like a venture capital portfolio. We’re going to invest in 20 initiatives, because each of them on their own is trivially inexpensive compared with the cost of dealing with conflict. And we may never know which ones of those created a response that prevented conflict. But we know that if we don’t do something, then at least some of those situations will turn to raging conflict.