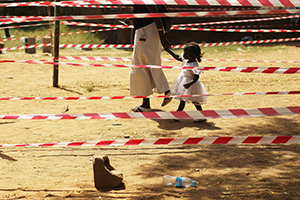 A mother and daughter walk to a polling station in Juba during South Sudan’s independence referendum, January 10, 2011. (Spencer Platt)

During the next 12 months, the United Nations, its member states, and partners will define their vision for sustainable development over the next 15 years. Earlier this month, the UN General Assembly agreed that its Open Working Group’s proposals for 17 sustainable development goals (SDGs) would form the basis for a transformative post-2015 development agenda. However, this noble vision can only be implemented if it has the power to inspire citizens around the world. In some regions, this will be much harder than in others, especially where the main structures of the state entrusted with leading the goals’ implementation are under severe stress. Yet the future of this visionary endeavor rests, more than anything else, on questions of governance and leadership.

The 17 SDGs define objectives for governments and multilateral agencies, with measureable targets. A product of negotiation, they will never be perfect. Critics argue that there are too many themes, that the goals are too vague, or that they are not sufficiently focused on empowering people and communities. Yet the fact is that these goals have the potential to energize a new, genuine spirit of partnership that can unite forces for goodwill around the world.

Setting goals for all of humanity is a relatively new experiment. In 2000, the General Assembly adopted the Millennium Declaration, from which the UN Secretariat extracted eight millennium development goals (MDGs), designed to help developing countries meet their basic needs. The MDGs had a powerful impact: for the first time, the entire UN system and governments shared one single agenda. Now, with the SDGs, the United Nations and its member states are setting a much broader agenda encompassing global priorities that are universally applicable, and incorporating issues that previously remained outside traditional development thinking, such as the promotion of peaceful and inclusive societies and the transition to sustainable patterns of consumption and production.

Millions of people have expressed their opinions about the SDGs on social media and in a variety of fora, and this is one important level of engagement. But the opportunity is far greater than this. The goals can ignite a coalition that acts for the common good. At local, national, and global levels, an array of individuals, faith-based groups, businesses, societies of professionals and researchers, and community groups in every land are already working to end poverty; ensure sustainable access for all to food, water, and sanitation; and become sustainable consumers. The SDGs can unleash a new potential for everyone to understand that the actions they are undertaking separately are now coalescing into a world agenda. But this will require authentic leadership, from the bottom up as well as from the top down.

Can this unprecedented level of leadership be awakened? The state, as the primary partner in implementing the proposed SDGs, is under multiple pressures. Today’s complex, interconnected, and interdependent world is profoundly affecting the art and craft of governing. Many eminently local problems confronting national leaders have become transnational in origin and effect, and their resolution increasingly requires greater regional and international collaboration. At the same time, rapid advances in technology have generated their own challenges for governments. New information and communication technologies have empowered citizens in unprecedented ways and helped flatten hierarchies in public organizations at local and central levels.

The pressures from below stem primarily from restive populations who have acquired a different understanding of the realities they live in relative to the elites in their countries, and they are pushing for greater agency in the ways they are governed. Where governments have been unresponsive, mistrust between citizens and governing elites has grown, culminating at times in open defiance, mass protests, and revolts—often with deleterious consequences for all. In many contexts, the nation-state is becoming a much weaker and more vulnerable institution. In several cases, it is disintegrating.

These internal and external pressures have motivated many countries to come together and initiate inclusive reforms to make their governments more open, accountable, and responsive to their citizens. The recently launched international Open Government Partnership platform, which has rallied over 60 countries, is one step toward a more people-centered form of governance. The effective implementation of the SDGs—in which people are both the vehicle and beneficiary of sustainable development—demands no less. Without participatory governance, there is little chance that the goals will become a source of inspiration for people the world over. Indeed, this kind of governance is consistent with the solemn affirmations and aspirations enshrined in the outcome document of the Rio+20 conference on sustainable development in 2012, which was titled The Future We Want: “We recognize that opportunities for people to influence their lives and future, participate in decision-making, and voice their concerns are fundamental for sustainable development.”

Beyond governance, the implementation of the post-2015 SDGs also has profound implications for the ways leadership is practiced and developed at national and international levels. What is needed to realize these goals is a leadership that is participatory, communicative, and horizontal. It falls to government, business, and civil society leaders to foster such leadership and empower citizens to fully participate in, and bear responsibility for, policy decisions that affect their lives. It is only by unleashing the leadership potential of each citizen that we can hope to transform the aspirational contents of these goals into sustainable results. The global People’s Climate March on September 21, which attracted nearly 400,000 people to the streets of New York City alone, is a resounding demonstration of global citizen leadership.

Notwithstanding the above challenges, there are significant grounds for hope. As the future of our planet is threatened and we find ourselves ever more connected, we are becoming increasingly aware of ourselves as one human community linked to Earth. A new sense of universality is emerging in the minds and hearts of people. Nothing concentrates the mind more than imminent danger.

If the goals and targets of the SDGs are understood solely as the concern of governments, multilateral agencies, and experts, the cynical spirit of the times will be reinforced. But if governance can be transformed and leadership nurtured at all levels of society, there is reason to believe that the SDGS can become authentic goals for popular movements, local communities, and all manner of networks.

The UNESCO constitution reminds us that the defenses of peace must be constructed in the minds of the human. How we think about the SDGs will determine their relevance for future generations. There is a window of opportunity now as the goals are being shaped, when individuals and groups of individuals in their millions can be inspired by the possibilities of creating a new collective direction for the human community.

Jimena Leiva-Roesch is a diplomat in the Permanent Mission of Guatemala to the United Nations and was a participant in the negotiations of the UN Open Working Group on Sustainable Development Goals. Youssef Mahmoud is a Senior Adviser at the International Peace Institute. Steve Nation is the Director of World Goodwill’s New York office.

The views and opinions expressed in this article are solely those of the authors and do not represent those of their respective organizations.