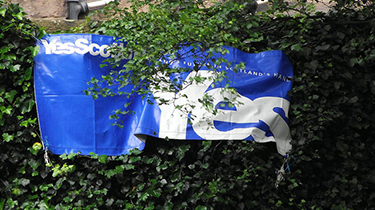 Spain’s Catalonia region is strengthening its call for an independence referendum following the vote in Scotland on September 18. Meanwhile, Russian separatists in Ukraine and Kurds in Iraq continue to push for secession. Although all of these groups desire independence, their strategies differ sharply. The Kurds have waged on and off war for many years, and the violence in Ukraine and the Middle East threatens global stability. In stark contrast, the discourse over political divorce between Scotland and England was remarkably civil. Violence was absent and neither side contemplated the use of force. Westminster was committed to honoring the outcome of the vote, just as both sides were committed to a legitimate, democratic process.

Scotland’s referendum was not a unique event. It belongs to a larger class of referenda that includes territorial changes from one sovereign state to another (Avignon in 1791, Crimea in 2014), votes on independence that failed (Western Australia in 1933, Quebec in 1995), successful votes on independence that followed years of civil war (Eritrea in 1993, South Sudan in 2011), and the many plebiscites that took place in regions that were legally defined as instances of decolonization (Micronesia in 1978, Palau in 1984). The events in Scotland were not qualitatively different from referenda that have happened elsewhere. Some of the best comparisons include the failed referendum in Quebec, and the successful referenda in Montenegro in 2006 and in Norway in 1905 when it seceded from Sweden.

Our research has shown that the benefits of statehood have been increasing over time, and this change has in turn driven an increase in secessionism. Scotland’s “Yes” campaign pointed to oil reserves in the North Sea that could provide revenue for an independent Scotland, as well as ethnic and political differences with the English. Meanwhile, the “Better Together” campaign highlighted the negatives of independence. Scotland would lose the pound or be forced to adopt austerity measures. Many of Scotland’s main industries threatened to decamp to London. And foreign leaders seemed to implicitly or explicitly support Westminster.

To conclude that the outcome of the Scottish vote was determined purely on the strength of argument, however, would be mistaken. Westminster permitted the vote because it believed the Scots would vote down the referendum; David Cameron’s September shuttle diplomacy is evidence of English surprise and concern about having possibly made an incorrect assumption. Had they known how close the vote would be, it may well have never happened.

The Scottish referendum stands as an example for secessionist groups and central governments alike, and lays bare some of the dilemmas each type of actor faces. Secessionists elsewhere will no doubt reference the Scottish case and point out that the UK put its democratic and liberal principles to the test, despite the fact that it had much to lose. For example, Catalan secessionists, who were present on the streets of Edinburgh during the referendum, supported the Scottish nationalists and reminded the world that there, at least, a government was permitting a national referendum and was prepared to honor the result. Catalonia is hoping to hold a referendum this November, but the Spanish government claims that it would be illegal. Similarly, the Autonomous Region of Bougainville may hold its own referendum on independence in the next few years, and those in favor of secession know that Papua New Guinea will have a much harder time ignoring the outcome given the Scottish example.

The lesson for sovereign states is more ambiguous. Although permitting a referendum can be a useful tool for managing secessionist demands—and it is fine public relations—states will be unlikely to offer them unless they are playing with a strong hand, and we should expect that only states that anticipate winning the vote will do so. Thus, while referenda like Scotland’s may become increasingly common as secessionists demand them following the Scottish precedent, they will rarely result in a new state.

As a consequence, we are likely to observe growing numbers of frustrated secessionists. Our research suggests that the trend has been toward non-violent secessionism. Of 55 secessionist movements in 2011, for example, less than a third used low-level violence (producing fewer than 1,000 battle fatalities) while none used major violence (defined as greater than 1,000 battle fatalities). By contrast, at the turn of the 20th century, half of all secessionist groups engaged in low-level conflicts, and a quarter of those escalated to major violence.

While this trend is encouraging, others have shown that non-violence is a relatively ineffective strategy to gain a new state and that, ultimately, it is great power patronage that determines which groups succeed in this goal. Given that referenda are likeliest to be held when the government is confident of an outcome in its favor, there is a real danger of simmering secessionists who conclude that violence is their best option.

None of this is to say that we expect the Scots—or for that matter, the Catalans—to turn to violence. There are real benefits to statehood, but also very high costs to using violence that groups already situated in stable, democratic states will usually prefer not to pay. Instead, these groups are more likely to engage in ongoing bargaining processes with the state that often yield greater autonomy, as in the Scottish case.

The irony is that the nations who arguably have the best institutional structures for forming a sovereign state tend to use democratic and non-violent tactics that can work against them when central governments refuse referenda. But the truly concerning cases are those that exist in poorer and/or weakly institutionalized states where democratic solutions hold less promise and where the costs of using violence are lower. The chance of secessionist conflict is far greater in Bougainville than in Scotland or Catalonia, and therefore, the evidence suggests, so are its chances of gaining independence.